From Uncyclopedia, the content-free encyclopedia
Jump to navigation Jump to search
“The lad sure looks good in shorts.”

“... What? Isn’t that what they all say in Buffalo? It’s not gay if everyone else says it, right?”

~ Oscar Wilde on the previous quote

Joshua Patrick "Fucking" Allen is an American hero playing quarterback for the Buffalo Bills and, depending on whom you ask, either God's gift to football or the biggest dunce on the planet. But those who call him a dunce are fuckin' Jabroni's.[1] If you keep slandering the man, you haven't seen him sling the football around. Who cares if he had only a 45% completion rate in high school, or a 51% completion rate in his rookie year? His rookie year? Come on, stats are for losers. The man puts his team on his back and with that howitzer of an arm and running ability of a bear, watch out. He will impregnate every man and woman alike in the stadium with his mind-blowing play. Josh Allen looks good in shorts.

Oh, and he managed to help Buffalo win a bunch of games and played college ball in Wyoming of all places. What a chad. Or dummy. Depending on who you ask. NFL Films calls him the "Winter Soldier", but no one knows where that nickname came from. Purportedly.

Joshua Fucking Allen was born in the middle of a field outside Fresno, California to a humble farmer couple named Jonathan and Martha Kent Joel and LaVonne Allen. Of course, his middle name had to be toned down due to FCC regulations, so his middle name is now officially listed as "Patrick".

Allen's main talent aside from helping in the fields was slinging the football, which he could throw a quarter mile "over them mountains" even as a kid. Even got the attention of a girl named Britt. Young Josh was a local legend but still passed over by everyone in Division I college football.

After having gone on a drunken bender after this rejection, in which he posted several tweets considered by the media to be homophobic, young Josh stumbled into a government test environment, in which he was injected with the Super Soldier serum, suddenly transforming from a 90-pound weakling into a 6'5", 245 pound thicc boi and turning an already impressive throwing arm into fucking Goku's. He was then code-named the Winter Soldier, memory-wiped of being roided out and dropped off in Death Valley ... err, wha? Josh got more lit. What else is there to say? What a chad.

Self-imposed training in the wilderness

After being passed over by everyone Josh decided to take things into his own hands. Taking inspiration from King Leonidas I, he ventured into the wilderness of Wyoming, wrestling with bear, wolf, and Bigfoot alike. It was there that he learned that his football could become a weapon and he honed his throwing ability, gaining the power to turn every pass into a missile strike, and loaded his exploits onto his Twitter account, hoping a college football program would take notice.

Josh gained quite a few followers, but no college program through Twitter. The only one who noticed was University of Wyoming coach Craig Bohl, who told Allen to "keep the fucking noise down" next door. However, Bohl, having a crappy football team, decided to give Josh a shot on the football team so Wyoming could finally beat Boise State. The rest is history, and Allen is now the only Wyoming football "player" to have any semblance of recognition.

Dick Cheney, fellow Wyoming graduate, saw Allen's howitzer of an arm and hired Allen for an "internship". Specifically, he installed a computer chip up Allen's skull and had him do shady black ops stuff requiring his rocket arm. In particular, the mind-controlled Allen was sent back in time and was used to take out Gaddafi, Osama Bin Laden, Kim Jong-il, Stalin, JFK – and for some reason Nicole Simpson and John Connor. Man that's fucked up ... Allen was also used to sabotage Tony Romo and make him keep choking because Cheney hates the Cowboys and for other personal uses ... which I'm not gonna go any further. He also has no memory of any of this due to him being Cheney mind-wiping him after every use. Okay, you've hacked into the NSA's secrets. Good job! Let's just say Cheney gave him a 5-star review and endorsement for the NFL. Wooooooooooooooooo! 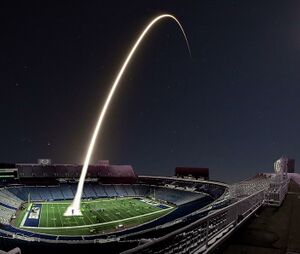 Classified NSA image of rookie Josh Allen accidentally nuking the leadership of ISIS with a pre-game warmup throw. ... Whoops, you weren't supposed to see that. We'll now have to arrest you. Blame our cyber intern ...

Part I: too OP

When the Buffalo Bills, having come fresh off the Nathan Peterman fiasco, realized they needed a real quarterback who could actually get them to the playoffs instead of having to be gifted one by accident, they followed all the NFL protocols to draft one of the the NFL's most pro-ready draft prospects, Josh Rosen. However, being the Bills, they screwed that part up as they always do and wound up with Josh Allen instead.

However ... in a twist of fate the NFL's own protocols fucked up in the first place by hyping up Josh "Weenie Hut Jr." Rosen as anything better than even a waterboy. That kid totally sucked once he left his prep school foosball team to play on a real football team. So by the NFL fucking up, that negated the Bills fucking up and they actually ended up with a viable quarterback in Josh Allen, and the Arizona Cardinals of all teams wound up getting fucked over instead.

Wasn't all smooth sailing for Allen and the Bills at first though. Maintaining his survivor mode mentality, Allen still launched every single pass like a heat-seeking missile, surprisingly with deadly accuracy. Only catch: he threw so hard that more than half of his pass catchers were vaporized before even sniffing the ball. Key word, deadly. Once defensive jabroni's like Anthony Barr or Jalen Ramsey made fun of Allen for that, they themselves got vaporized. Petermeme, somehow still on the roster as a backup, then advised Allen to not try and put any effort into his throws, resulting in quite a few picks. After this was discovered, Petermeme, who was once the teacher's pet of coach Sean McDermott for some unknown reason, was finally executed for treason by McD, and Allen, being the friendly giant we all love and know, still had no idea where the perfect balance was, resulting in a lot of inconsistent play.

Despite all this, Allen still somehow won more games than expected a la Tim Tebow, and was accepted into Bills Mafia after eagerly shotgunning a whole keg of Labatt Blue, then jumping into multiple flaming tables with fans during pregame tailgates. A stark departure from those dull Bills quarterbacks of the past, aside from Jim Kelly and Ryan Fitzmagic. What a dummy. Or chad. Depending on who you ask.

After Allen and the Bills blew a big lead to Deshaun Watson, Bill O' Buttchin and the Houston Texans in their second playoff game of the 21st century, he got down on himself again and coped by consuming four truckloads of Buffalo wings and Labatt before realizing he needed to unlock his chakra and calm his nerves.

While meditating one day Josh allowed Dick Cheney to infiltrate his mind again and was sent back in time to try and kill Tony Stark's father. After realizing this treachery, Allen said "fuck this shit" and a-sploded Dick Cheney for meddling with a fictional universe. Nobody messes with Marvel. After Allen went rogue, the U.S. government tried to hunt him down, but U.S. president and notable jabroni Donald Trump pardoned him as Allen didn't kneel like that jabroni Colin Kaepernick and also correctly reasoned that Dick Cheney was an even bigger jabroni, the only good thing Trump did in his entire presidency. Trump is still a massive jabroni.

Allen gained the ability to resist the haters after learning to free himself from Cheney's mind control and finally became more calm as a football player. He also had teammate and onetime BFF LeSean McCoy arrested for treason after spoiling the ending of Avengers: Endgame and promptly replaced with Stefon Diggs. As mentioned earlier, NOBODY messes with Marvel.

Relieved of his black ops duty and honorably discharged from the U.S. military, Allen finally found his Zen and could now focus on the one thing that truly mattered: football. And man oh man, did Stefon Diggs, the Falcon, really complement Allen, the Winter Soldier. In fact, Allen and Diggs did so well that ESPN committed seppuku upon realizing how wrong they were about him. What a chad.

To this day Allen continues to defy expectations and has somehow become the second best quarterback in the league after Patrick Mahomes. Once in a while he'll still accidentally laser a jabroni to death with his rocket arm or banish defenders to the Shadow Realm by means of stiffarming or hurdling them. He has also singlehandedly caused the city of Buffalo to gain population for the first time in seventy years by impregnating every single resident with his mind-blowing or mind-numbing play. He now has to pay child support to everyone in the city. What a dummy.

To everyone's surprise, Cheney is secretly still alive and is also the cigarette smoking guy from the X-Files. He covertly wanted Allen to stay inconsistent to keep fucking Buffalo over and keep them in mediocrity forever. Well, now Cigarette-smoking Cheney, hating the Bills and also pissed at Allen for snitching on him, had to find other ways to keep Buffalo out of the Super Bowl, supplying Patty Mahomes with roids and crack cocaine every time Allen plays him and even rigging that playoff game in 2022 when Allen had it in the bag.

Dude, why are there so many fuckin' black lines here? Whoever wrote this article is a massive fuckin' jabroni. Not like he's placing any more NSA secrets here, right? What a dummy. No one slanders Joshy Boy.

Oh, wouldn't you like to know? The truth is still out there[2] 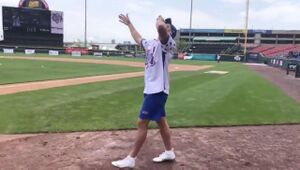 Allen downing a man beverage like a boss. Also lookin' good in shorts.

As opposed to Tom Brady eating nothing but avocados and piss, Josh Allen fuels himself with Labatt Blue and BUFFALO wings. Because that's what only a manly man like Josh Allen eats. He dips that shit in bleu cheese like a real Buffalonian, fuck ranch.

I also wish I could marry Josh Allen, but he's also got a stud of a girlfriend who helps him practice yoga to calm those nerves. No homo, but I'd go homo for Josh. Even though I find Britt mad hot at the same time. Now I'm questioning myself ... Either way, man looks good in shorts.

Josh Allen was also on the run from the U.S. government after going rogue, but now the government bends to the will of Josh Allen. All hail Josh Allen.

For those without comedic tastes, the so-called experts at Wikipedia have an article about Josh Allen (quarterback).

Featured Article  (read another featured article)
Featured version: 8 September 2022
This article has been featured on the front page. — You can nominate your favourite articles at Uncyclopedia:VFH.