The grim visage of an Antichrist.

Thought to be born as Allen "Al" Davis (July 4, 1929 – October 8, 2011) was an American football executive. He later gained notoriety as the owner and supreme commander of the famed Oakland Raiders, a band of cutthroats and marauders. It has been suspected by Communist Satanists and cultists that, due to his remarkable old age and lack of proper birth documentation, that Al Davis is, in fact, the original Anti-Christ. In other words, those with a greater knowledge of demonology and the politics of Hell presume that Al Davis is the original being sent to the earth to reverse the works of Jesus of Nazareth. 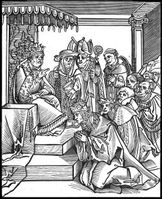 This illustration depicts the Pope kneeling and kissing the reptilian feet of Al Davis.

No one knows the origins of Al Davis for certain, but it is presumed that his eternal life slow aging drew the attention of doctors and spiritual leaders worldwide. There are many potential pictures containing Davis, but none that specifically refer to him by that name. Experts believe this is a result of his name changing over the years, or perhaps some kind of body-stealing ability that he has. The confusion over this phenomenon makes tracking Al Davis throughout history very difficult.

The earliest known direct reference to Al Davis comes from a 17th century Italian drawing of Davis, seated upon a throne, the Pope kneeling to kiss his bare feet. Many have noted that Davis looks older in this drawing than he has as recently as the 1990s, but experts claim that this could just be the result of Botox treatments. There is, as of yet, no conclusive evidence tying Davis' 17th century body to his current body, and the government lacks the means to acquire a DNA sample.

Al Davis' personal guard became known as the Raiders as recently as the 20th century, when rumors circulated that he was responsible for the Great San Francisco Earthquake of 1906. The Raiders, a band of pillaging pirates and scoundrels, engaged in demonic rituals and cursed loudly, infuriating many. Their penchant for parking in handicapped parking spaces, despite lacking the requisite handicapped badges, attracted the attention of law enforcement, and their boisterous nature and black clothing convinced many mothers that they were "Not a good influence to the children." The Raiders have thus been universally disliked for the entirety of their history. It is clear that people only join the Raiders when they have the talent to be a Raider, and the desire for riches and glory. Because of excellent tactical leadership and organization, the Raiders remained a fearsome group, loathed though they were.

Perhaps the most important Raider leader is Jon Gruden, who both took the Raiders to new heights and new lows in the span of a decade.

This was in stark contrast to former QB JaMarcus "The Potential" Russell, who focused mainly on taking the Raiders to new lows.

For those without comedic tastes, the self-proclaimed experts at Wikipedia have an article about Al Davis.

A rare photo of Jon Gruden, who has since fled to Florida following a dispute with Al Davis. Once arriving in Florida, Gruden established the Tampa Bay Buccanneers, a pirate group devoted to defeating Davis.

Al Davis and his Raiders were, after several painful setbacks to a group of ragtag Patriots in the snowfields of Foxboro, and a crushing defeat at the hands of the Ravens, a gang lead by notorious murderer Ray Lewis, finally ready to make the step into history, and take over the world. Just as their army was running roughshod over the rest of the nations, Davis' chief adviser and confidant, Jon Gruden, broke rank and took half of the Raiders with him. The loss, attributed to disagreements in leadership and strategy (Gruden was in favor of slowing the march and suffocating opponents with a powerful grind-it-out attack, Davis was ready to blitz the remaining opposition into dust), fractured troop morale and left the Raiders shocked and confused.

Rather than recover his losses and re-stage an attack in the future, Davis pressed on, further reducing morale. As supplies ran low and the winter season came on, Gruden saw his chance to strike. Renaming his loyalists the Buccaneers, this decorated, battle-tested unit had just enough to overwhelm the remaining Raiders. The result was a spectacular defeat for Al Davis—one from which he has yet to recover.

Al Davis currently resides in the same Coliseum where gladiators matched wits and arms for eons. Even now, the Raiders hold staged scrimmages and exhibitions at the Coliseum against other private groups and military corporations. Following the great losses Davis' Raiders suffered in a lopsided defeat at the hands of Sir Jon Gruden, such contests have not been as impressive as years past. The Raiders, due to that defeat, have lost a great deal of prestige that they once enjoyed. The one thing that remained was the history of the Coliseum, and the ravenous fans who congregated there.

The Coliseum was infamous for rowdy partying and celebrating, unspeakable violence and senseless destruction. Many spectators and journalists have been stabbed or worse, for the crime of being an outsider. It is believed that the Raiders contributed in large part to the decline of the once glorious Oakland tourist economy.

Fearful of his growing sway in Northern California, deep within the precious silicon computer chip fields of Silicon Valley, the Galactic Empire was quick to appease Davis, and ensure a continued trade of technology into the Empire. So pressing was this matter, that on November 14, 2003, the Emperor dispatched Darth Vader himself to negotiate the treaty, and swear the Empire to it. The treaty consisted of annual tithing of spices and mildly valuable 4th round draft picks.

Although Davis has never commanded a large navy or air force, the strength of the grunt soldiers, as well as their fanaticism, has made invasions of the Coliseum a risky proposition, at best. For this reason, Jon Gruden refused to pursue the Raiders back to Oakland, even though he had the upper hand. Gruden's level-headed decision, and his wise decision to slow the march in 2002, has resulted in many Raiders questioning their leadership. It is widely believed that, although he lacks the demonic power of Al Davis, Jon Gruden is the superior strategic mind, and largely responsible for the success of the Raiders from 1998-2002.

~ Randy Moss on when he finally realized the truth

“I'm personally going to slay Al Davis with this axe!”

“To Kim Jong-il the Al Davis of Korea”

The Raiders are the personal body guards and military support of Al Davis. They have gained a reputation for wicked behavior and war crimes on the field of battle. They have lacked class in defeat, and have shown no mercy in victory, as evidenced in 1983's infamous "Black Sunday", in which Raiders obliterated what was thought to be a stronger group of Redskins Indi Native A Indigenous Peoples. Led by former Trojan warrior Marcus Allen, the Raiders showed no mercy in breaking the spirits of their enemies, and taking their women. A list of past and present Raiders follows. 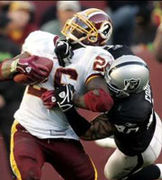 A merciless Raider catches an unsuspecting Redskin from behind, his fangs biting into the redskin's arm. 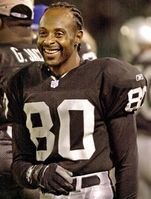 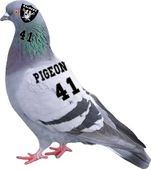 Predictions for the Future[edit]

Please see the Bible, Book of Revelations, for a detailed explanation of the role of the Antichrist, Al Davis.

Others have predicted that he is actually the cause of global warming and that he will ultimately re-destroy New Orleans in the next 4 to 8 years.and is the reason for the earthquake in Haiti.