From Uncyclopedia, the content-free encyclopedia
Jump to navigation Jump to search
“Which team do you want to see back in Los Angeles? Apart from them.”

The Cleveland Los Angeles St Louis Los Angeles Rams are a professional American Football team which has been based in three of America's classiest cities.

While you might associate Ohio with being grim and industrial, that was actually ideal for fledgling football teams, which were formed by big factory workers hurting each other for overtime pay.

The Cleveland Rams were one of a number of teams that sprang up in the Sixth City, and has the distinction of being part-owned by Bob Hope[1] at one point.

Thus, comedy moments almost inevitably followed: first with the Rams winning 1945 NFL Championship by a one-point margin after earning a safety when Redskins Quarterback Sammy Baugh's pass ricocheted off his own goalposts - which were on the goal line back then, kids - and bounced through his own endzone,[2] second when the Rams immediately left town after winning the trophy, and third with the formation of the Cleveland Browns.

It should be noted that a Cleveland City Hall survey conducted in Europe between 1941 and 1945 found 64% of respondents said they would prefer to live in Cleveland than where they currently resided.[3] 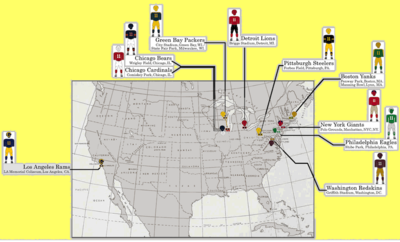 The 1940s NFL, with the Rams looking like the boy in kindergarten who was made to stand on his own because he smelled of shit.

Majority owner Dan Reeves had begun the moving process by taking out a map of America and marking off all the cities which would be more pleasant to live in than Cleveland. This proved to be exhausting work, so he simply cut the process short by asking: "Which city do they make that pornography stuff in?"

The move was not exactly convenient for the other nine teams in the NFL. The closest team to L.A., Chicago, was 2000 miles - not ideal in an era when teams traveled by school bus or walked to opposing teams' cities.

In return for agreeing to the move, the NFL imposed a condition on the Rams: that they include one black player in their roster.[4] Between 1933 and 1946, there wasn't a single black player in the NFL, largely because of stereotypes that black men were not big, fast, or scary enough to play football.

The Rams, with the natural rush of adrenaline that anyone would feel on leaving Cleveland behind, totally went nuts and signed two black guys for the 1946 season, Kenny Washington and Woody Strode.

To their credit, they made very few "Woody" jokes.

Unlike the modern game, football in the 1950s was played in total silence.

In 1949, the Rams became the first team to add a logo to their helmet, when halfback Fred Gehrke ignored the homophobic taunting of his teammates as he sat and painted cute yellow spirals on fifty leather caps using stencils.

The Rams played in three "NFL Championship games" between 1949 and 1955, winning one, but because these predate the Super Bowl, most fans scrunch their noses if you count both them and Super Bowls as "winning League championships".

The team enjoyed modest success in the 1960s and 1970s, even reaching a Super Bowl in 1979, but the novelty of pro-football in notoriously fickle Los Angeles was beginning to wear off: other more glitzy attractions, such as the Lakers, Charles Manson, psychedelic rock and cocaine had taken their toll on the Rams fanbase.

The sense of decline heightened with the team's move to suburban Anaheim in 1980s: anyone who has made the move from USC to Anaheim University will tell you that the journey does not exactly have a naturally euphoric vibe.

Ironically, while many white residents of L.A. were moving to Orange County to avoid black people and have more space, the Rams were taking black people to a smaller space: Anaheim Stadium's capacity was about 30,000 less than the Coliseum, giving the Rams a shot at selling the place out, and therefore having a chance to broadcast their games on TV.

Unfortunately, millions of viewers tuned in just in time to see the team's success levels in the 1980s and 1990s drop, thanks to a certain Joe Montana leading the San Francisco 49ers to Super Bowl after Super Bowl, and team owner Georgia Frontiere (a woman) decided to take the team to St Louis. 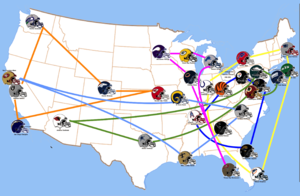 The simple logic behind NFL divisions in the 1990s.

The decision caused consternation for a number of reasons.

Firstly, the Rams were playing in the NFC West, a division which was barely hanging on to its western status as it was. The presence of teams in San Francisco and Los Angeles just balanced out interlopers from Atlanta, New Orleans, and, incredibly, league newcomers Carolina Panthers. While St Louis was at least a Midwest city, the Rams still found themselves to the East of teams from NFC Central and NFC East, and now four of the five NFC West teams were located within 900 miles of the east coast.

It should be noted that, in the decades since, many football fans have resolved the issue by 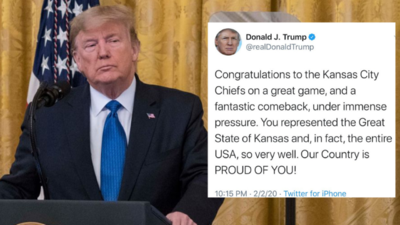 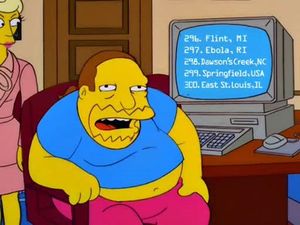 West St Louis often brags of its status as number 295 in America's 300 most liveable cities.

Secondly, St Louis might have had a rich history of blues and jazz, not to mention a brief history with the equally itinerant Chicago St Louis Phoenix Arizona Cardinals, but more recently it had received nationwide fame as a murder-ridden dump.

Frontiere, perhaps arming herself with the logic that if Cleveland was a dump and the Rams had had success there, then St Louis being an even bigger dump could only mean one thing: Super Bowl success.

Quarterback Kurt Warner was not convinced, and was overheard in preseason training describing the town as "the biggest shithole on earth", a phrase which locals described as "a slight exaggeration".

In an almost exact carbon replica of the Rams' earliest years, the St Louis Rams started modestly before exploding into success after 5 years. When the team's offensive brilliance led them to Super Bowl XXXIV in 1999, Warner's slur on the city was playfully transformed by fans into "the best shithole on earth", "the best shitshow on earth" and, finally, "the greatest show on turf".

The team returned to the Super Bowl two years later, to play the New England Patriots, which, if the Dallas Cowboys are America's team, are kind of the opposite.

The Rams didn't know it then, but the 20-17 defeat they suffered that day was to usher in two decades of evil, evil Patriot dominance, in which an ageless quarterback, deflated balls, and the shadiest of hooded head coaches struck dread into the hearts of the 31 other constantly-moving franchises.

The Rams would never hit such heights again, and a playoff drought in the first decade of the 21st century gave way to an eerily familiar whining noise based around the word "stadium".

The team, now owned by Stan Kroenke, the famously dedicated owner of the Premier League's Arsenal, NBA's Denver Nuggets, NHL's Colorado Avalanche, MLS's Colorado Rapids, among others, began bitching about the facilities in the Edward Jones Dome. Kroenke filed a 65-page lawsuit, citing a number of issues including insufficiently long hot dog wieners, poor hygiene in the stadium's corporate swimming pools, and a lack of nearby coastline. 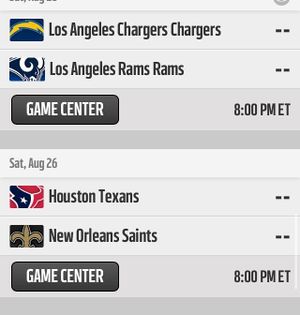 The NFL's mobile website rebranded both new Los Angeles sides for many years, to the bemusement of users.

For those without comedic tastes, the so-called experts at Wikipedia have an article about Los Angeles Rams.

The NFL had gone from having the Rams and the Raiders based in L.A. in 1994, to having no teams for the following twenty years. The league, which has long sighed at the sight of its (generally awful) New York teams playing in New Jersey, and the immoveable franchises based in tiny, shitkicker towns, were desperate to get teams back to La-La Land.

When the league announced it would hear bids for the franchise spots from the Rams, the Raiders and the San Diego Chargers, L.A.-based Raiders fans began celebrating their team's certain homecoming. The Raiders had, comfortably, the biggest fanbase in the greater Los Angeles area, so many thought their return a sure thing.

They had not counted on one thing: NWA. The league was incredibly concerned by photos which had surfaced from 1992, showing Ice Cube, Eazy E, and Dr Dre sporting distinctive Raiders caps. Something about the black color of the caps attracted gang-affiliated rappers in a way the Anaheim Ducks could never hope to. NFL Commissioner Roger Goodell heard the track Fuck tha Police and immediately discounted the Raiders bid.

To make up for denying the fans the team they wanted back in L.A. Goodell offered them two teams they didn't want, and forced the teams to commit to playing in the same stadium, so Raiders fans could watch up to 16 games a year of L.A. teams not called the Raiders. The Raiders, meanwhile, would be moved to a city totally free from organized crime: Las Vegas.

The Rams moved first in 2016, and duly won over their doubters, finishing 4-12. The season was such a success that the Chargers moved the following year, playing their home games at the 30,000-seater StubHub Center, home of a soccer team,[5] and selling most of the tickets to visiting fans.

That year, both the Rams and Chargers earned winning records, with the Rams even making the playoffs, despite the old problem of being unable to fill the Coliseum leading Catholic fans to believe the team was effectively performing acts of penance in some kind of football purgatory.

In 2018, the joke became somewhat more serious, with both teams making the playoffs. There were so few Chargers fans in L.A. that the media was forced to ask San Diego locals if they would be rooting for the new team in the event of them reaching the Super Bowl. The Rams, meanwhile, did make it to the Super Bowl, only to lose to an ageless quarterback and the shadiest of hooded head coaches.

Finally, in 2022, the Rams won Super Bowl LVI. Rumors that they immediately began looking to re-locate back to Cleveland are yet to be confirmed.

Despite being trailblazers in the painted helmet department, the Rams have endured serious problems with their uniform since moving back to Los Angeles. There are a number of factors at play:

Google used the following image as a recruitment tool, asking candidates how many non-matching shades of blue and yellow they saw, to test perception abilities. 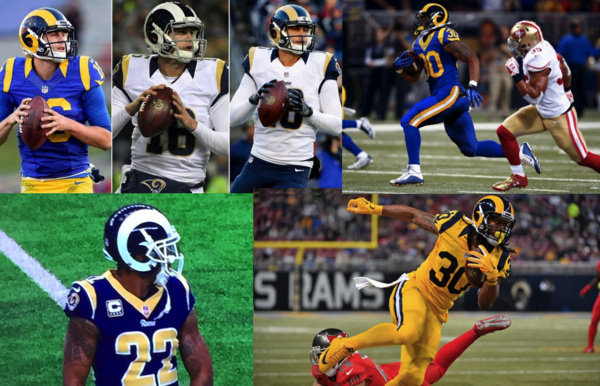 After much failed experimentation, Stan Kroenke gave up and decided to make the Rams wear Wal-Mart uniforms because why not?