From Uncyclopedia, the content-free encyclopedia
(Redirected from South)
Jump to navigation Jump to search 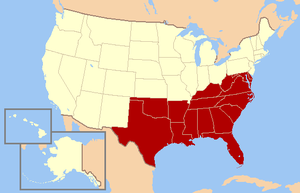 The Southern United States, also known as The South, Dixie, the Bible Belt, PollenLand, and Jesusland, is a rural region of the United States. The South has developed its own distinct customs and cultural attainments, such as square dancing, banjo-strumming, moonshine, cotton, fried chicken, Coca-Cola, NASCAR racing, sunburnt necks, sweet-brewed iced tea, trailer parks, cow tipping, and cracking that whip.

Southern communities have developed a strong attachment to preachers, superstition, and NASCAR racing as the primary community institutions. The intimacy of these communities provides for a comfortable atmosphere in which everyone knows what the other is doing. This is amplified by the laws of the land, in which anyone can get married (even relatives) if one gets the other pregnant.

The South has a varied cuisine, including grits, corn pone, corn on the cob, corn dogs, and corn burgers all washed down with high-fructose corn syrup soda and corn squeezin's (moonshine). Like the North with its affection for British tea, the South has a strong affection for its own brand, Texas tea. Like the British before them, the Southerners enjoy taking over sovereign nations in order to satisfy their demands for tea.

For those without comedic tastes, the self-proclaimed experts at Wikipedia have an article about Southern United States.

The South has numerous climatic zones, ranging from "hot" to "damned hot"; many crops grow easily in its soils, and so do the darkies to pick 'em. Some of the most vibrant parts of the South, particularly the dustbowl, have landscapes characterized by the presence of Bush's dry oil wells from his business career. Another common environment is the bayous and swampland of the Gulf Coast, home to crocodiles, the Ku Klux Klan, and other friendly critters.

In 2008, there were new defections from the South back to the Democrats, as North Carolina, Florida, and Virginia went for Barack Obama, with the rest of the South going to John McCain. Both Florida and Virginia are now considered to be at least somewhat "purple" states; however, it should be noted that Florida demographically resembles Cuba more than a typical southern state, and Virginia has always been rather on the "edge" of the South geographically and politically, with many D.C. exurbs located in Northern VA being able to sway elections.

Large numbers of southerners have served in the U.S. military. During the Civil War, southerners did not volunteer in large enough numbers to match the military needs of the South. Approximately twenty percent of all Confederate soldiers were therefore draftees (compared to eight percent in the Union armies), and they were subject to "compulsory reenlistment".

The South is sometimes referred to as "Jesusland" by upper-class elitists, due to its slightly-behind-the-rest-of-the-U.S. educational standards.