From Uncyclopedia, the content-free encyclopedia
Jump to navigation Jump to search
“I'll go there again for my final breath, because it is indeed Heaven on Earth”

“Land of Fruit and Honey”

South Keaston, officially known as the New Republic of South Keaston is an Indonesian island state located in the Celebes Sea 2,200km (1,300 miles) off the China mainland. To the north is the Sulu Sea, and the island province of Palawan. To the west lies Malaysia, while to the south lies the Makassar Strait, and the large Sundanese island of Sulawesi.

Formerly an Indonesian island, South Keaston declared its sovereignty in 1967 after years of instability during the Indonesian Transition to the New Order. Originally conceived as a republic known as Keaston, the sovereign state fell victim to inner strife and the Keaston Civil War began in 1969. Though the war only officially lasted for 22 minutes, Keaston was divided into two separate nations (North Keaston and South Keaston). The fighting between the divided regions lasted for 18 years, until North Keaston and South Keaston reunited under South Keaston's flag in March of 1987. In order to strengthen its war weakened economy, South Keaston quickly began to rebuild by exporting tropical fruits to the surrounding Indonesian islands. Indonesian's trade routes with China, the US, Japan, and Singapore led to the increased demand for South Keaston-grown fruits and grains. By 1992, South Keaston declared its economy recovered and increased its fruit and vegetable production in order to fill growing demands around the world.

Though started as a Republic, Keaston was quickly criticized by their former Indonesian leaders for following a more Communist-like platform for their government's conception. However, after the fall of the original Keaston government, the new government in place strictly followed a Republic standard. After the Keaston Civil War, South Keaston has generally been regarded as having a weak government. Since the re-establishment of South Keaston rule in 1987, the country's government has been reformed several times. While continuing to call themselves a Republic, South Keaston has incorporated several different government types, including (but not limited to) Libertarianism, Monarchy, Authoritarianism, Totalitarianism, and Dictatorship. 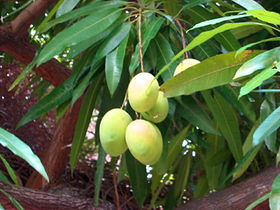 An example of one of the many tropical fruits commonly grown in South Keaston.

South Keaston's main resource is its tropical fruit trade. Since the country's re-establishment in 1987, the tropical fruit trade with Indonesia has helped to increase trade and economy. Other main resources include grains and vegetables. Indonesia helped South Keaston's fruit gain international notice in the late eighties and early nineties by moving tropical fruits along its trade lines with countries such as the United States, Japan, and China. Due to the country's instability, larger countries have shown some reluctance to enter trade agreements with them. This led to a slight decline in the amount of exported tropical fruits between the years of 1992-1994. In late 1993, South Keaston entered into a trade agreement with Indonesia to allow South Keaston-grown fruits to be exported and governed by Indonesian law. In return, Indonesia is allowed to buy fruits and vegetables from South Keaston cheaper than any other country in the world.

In 2001, unseasonably cold weather destroyed 90 percent of South Keaston's harvests, leading to the economy's near-collapse in 2002. With enormous amounts of financial aid from Indonesia and other surrounding regions to supplement the country's income, South Keaston stabilized the economy. In 2003, South Keaston closed its borders and canceled trade agreements while the country cited a period of regrowth. Its borders and trade agreements were reopened in January of 2006, at which time South Keaston began repaying its debts. As of June, 8th 2008 South Keaston has re-closed their borders due to the weakened nature of its economy. Government officials have expressed hopes of being opened to trade by the 2nd Quarter of 2009.

South Keaston holds general elections every six years to elect their President. Their two main parties are FEP(Fruit-Exporters Party) and the IEP(Isolationist-extremist Party). Currently, South Keaston presidential hopefuls are traveling the small country for votes. The IEP Candidate, Davilia Shugar, is of Indonesian descent as is most of the South Keaston population. The current FEP Candidate is of European descent, a minority in the country.

Political analysts for the country have stated that this election will test the country's tolerance and answer the question most South Keastons have: "Is South Keaston ready for its first white president?"

South Keaston's culture is very diverse and multi-faceted. While its main influences are Indonesian and Chinese, the country has worked to build a very different cultural environment than the regions that surround it. Visitors to the country report a rich and extravagant entertainment community, including literature and theatrical productions. However, in an attempt to keep their culture separate from the surrounding regions and the rest of the world, the export of any literature or theater production is strictly prohibited and regulated. Individual farms hold annual countrywide competitions to help drive harvest sizes and qualities. Awards are given each year to the winners chosen by a citizen-chosen panel of taste-testers. There are rewards presented in several categories, including quality, quantity, and weight. Inside the country, farms and orchards that have won awards can charge more per bushel than farms without awards.