~ Timmy on The South Park Institute. And everything else, for that matter.

The South Park Institute is a quasi-museum, and children's "training center" complex located on the outskirts of the township of South Park, in Wayne County, Colorado.

It is now most famous for housing the Book of Mormon and Joseph Smith's gravesite, as well as the South Park Red Light District.

It was originally one building in a remote region of South Park named "Northville". The original name for the center was "The Northville Training School for Feeble Minded Children". It was later titled the "South Park Institute, or SPI for short. 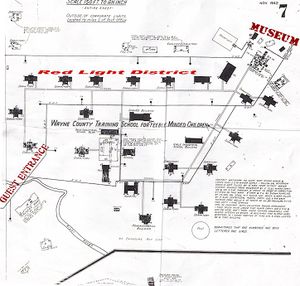 Full map of the SPI Complex.

In 1926, the children "training" business was so "hot" in Northville that it soon expanded into a 1000 acre, 26+ building compound.

Beginning in the 1990's, the Indian Casino's prostitution bureau stole most of their "clients", and their "clients" actual clients. Soon thereafter, 250 acres including several buildings in the north-west area of the complex were christened by the South Park Board of Trustees as museum space for the recently excavated Book of Mormon. To get there just keep going past the Red Light District, keep left, and you can't miss it.

In 2000, Joseph Smith's tomb was exhumed to the museum area of the site.

"Icepick" Lobotomy developed at the SPI.

Robert Haskell was let go from his tenure as the Warden of the Ionia State Prison in 1924 on "good behavior". He began construction on the first building of the Institution in 1925 using money he made running booze during the Prohibition.

Dr. Haskell is attributed with the invention of the "ice pick" lobotomy, which he thought up during his tenure at Ionia.

Later in 1963, Dr. Haskell accidentally committed suicide by attempting to give himself an icepick lobotomy procedure while hopped up on aged moonshine he had stashed from the back in the Prohibition days.

Dr. Gilbert had a background when took over as Curator in 1963. 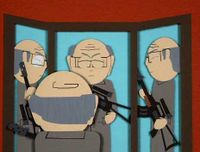 Garrrison having an identity crisis wearing a dress an holding a machine gun. Some wonder if 'he' should be a patient at SPI.

In 2005, after receiving a sex-change on the facility premises, 'Mr.' Garrison became the first person to hold both of the head positions as the museum "Curator" and the 'training center' "Monsieur". 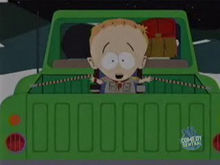 Timmy on his way back to the Institute

Joseph Smith's sarcophogus was expidited here during the year 00' in a clandestine mission spearheaded by David Icke and Jeff Rense.

Timmy from South Park stayed here on numerous occasions during the late 90's. His parents would always threaten to take him here unless he stopped saying "timmay". 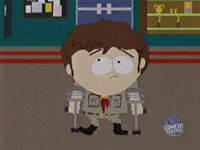 Jimmy after 9 months at the SPI.

Jimmy Vulmer was originally from Golden, Colorado, but after getting caught drinking Coors Light on several occasions, his parents decided to ship him to the institute.

Afterwards, his parents moved the family to South Park to get him away from that beer factory.

Now, he and his parents allege that the "training" at the institute caused his muscular dystrophy, but nobody in South park ever seen him before hand to corraborate their story.

Jimmy later alleged that his steroids supply was from an inside source at the institute, but not enough evidence was found to convict Dr. Gilbert and the case was closed.

Pavlov was well known for programming his dogs to salivate when he'd ring a little bell. Haskell decided to hire dozens of dogs for "industrial" research and "other" purposes.

Proves beyond the shadow of a doubt that UFO's exist and they visited Joseph Smith to give him the Book of Mormon. Photo taken in 1828. Non-edited.

Initially, Mormon apolgists alleged that the reportings were a hoax perpetrated by people who either...

1. ...believe in UFO's, and are racist "anti-semites" that hate Mormon wanna-pre-Zionists. Mrs. Garrison alleges that these conspiracy theorists are trying to confirm their own alien agenda while debunking the Mormon's to prove the Illuminati built the Great Pyramids AND Joseph Stalin's pyramid tombstone that is also onsite in the institution.

2. ...are CIA agents that are conducting psychological operations, using space beam technolgoies, to scare the Red Light District "guests" away. The theory put forth states that the Indians from the Casino are in cahoots with them to draw all of the action over to the casino where people from the intelligence community are known to have backroom hedge funds.

3. ...are the Scientologists performing magic tricks with their E-Meter machines.

The Book of Mormon Exhibit

The underground tunnel that leads to where what is undoubtably history's most important artifact is kept for display under the Fair Act Doctrine. 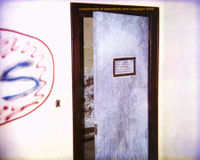 The Entrance to the Book Room.

Directions to the Book Room.

Scientologist are well known for protesting the psychiatry practices (icepick lobotomies, etc) that go on in the SPI.

In 2001, shortly after the Smith tomb transaction, a scientology sponsored bunker shaped like crop circle's appeared near the SPI compound. Since the "church" of Scientology has been paying off elected officials on St. Petersburg, FL (they seriously have), many allege that they now have numerous South park officials in their pocketbook. One supporting piece of evidence is the fact that Tom Cruise has even appeared in a recent episode of the towns weekly soap opera TV show. 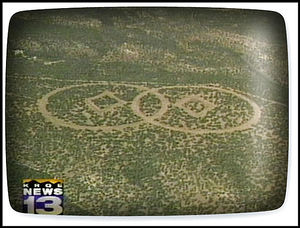 Conspiracy theorists allege that the scientologists are there in attempt's to summon Xenu, their imaginary alien dictator deity overlord, to attack the Zionist alien's that are allegidly being summoned by the Mormons.

There have been numerous recent scandels between Scientology and Mormon members. 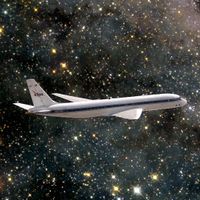 They forgot to build a runway for Xenu to land his space DC10.

In 2003, a handful of Scientologists escaped from the detention wing of the bunker complex and made their way to the Red Light District through the tunnels that connect into the SPI tunnel complex. Electronic security measures were installed later that week.

Then, in 2004, several kids picked up communications signals from the tunnels complex and were able to record a backroom deal between the Mormons, the Psychiatrists and the Scientoligists to exchange Scientologist "E-Meter's" for advanced documentation on psychiatric mind control techniques. 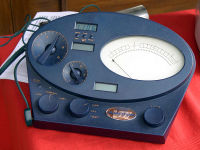 In 2005, sources claimed that the Mormons did in fact acquire an E-Meter, determined that either the Scientologists couldn't have been using them to propagate the UFO sitings, or that they sold them phoney machines. In any case, reports have confirmed that the Psychiatrists converted one of the childrens dormatories into a sweat shop to mass produce the potentially phoney E-Machies.