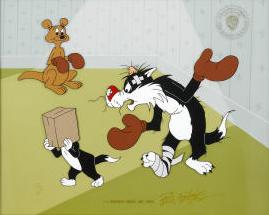 Sylvester the Cat (October 12 1937 - December 3 1976) was an Animated American feline, originally made famous by his involvement with the now-controversial Looney Tunes project (see main article for details). He spent his later career trying to distance himself from this work, and is now most commonly recognized as a hero and martyr of the Gay Rights movement in America.

Sylvester was born in a small, cardboard box under a bed in the back room at Granny's house in 1937. This was typical of life for Animated Americans at the time, as the movement to grant full civil rights to Animericans was still decades away. He was taken from his parents and sold to Dot Warner almost before his eyes had opened. Dot doted on him for a time, pampering and spoiling him. However, he was still not treated as a full member of the household, forced to eat and sleep off the floor most of the time, only to be snatched up and forcibly petted by Dot when she was feeling bored and horny. As he grew up, he stopped being cute enough for the ever-demanding starlet, and eventually Dot donated him to the casting department at WB, where he lived in a small pen with dozens of other young Animericans.

Life in the pen was hard for Sylvester, who was used to a life of (relative) comfort. While here, he was subjected to repeated sexual assaults by his penmates. After "making the rounds" for a while, he caught the eye of fellow penmate Captain Pete. Pete had been in the Warner Brothers Anipen for years, since he was sold off as part of a lot of unused and unwanted characters by Disney. Despite the abysmal living conditions in the pen, they formed a close bond, becoming first friends and then lovers. In his memoirs, Sylvester later recalled this as the happiest period of his life.

Tragically, Sylvester's new love was not to last. It came to a sudden end when a producer came to the pen looking for Animerican actors for a new project. Having no rights of their own, he was taken away to the lot in Burbank and forced to participate in a variety of secret military plots, as well as appearing in propaganda films. Two months after his transfer, Pete died of a rare form of cellulose decay, which was common in the Anipen in those days.

This news hit Sylvester hard and he turned to substance abuse, starting with alcohol and ultimately graduating to Kitten Huffing. His new job afforded him many luxuries, including a comfortable apartment on the studio and his own private car, but he after Pete's death he found no comfort in these things. Towards the end of this period, he would often be found passed out, a bottle of gin in one hand and a dead kitten in the other.

The studio took all steps to keep Sylvester's drug abuse a secret, and made no real effort to help him overcome his personal problems. However, this changed in 1943, when studio executives learned that Sylvester was having a homosexual affair with aspiring actor Goofy, who would later become famous for his many roles in rival studio Disney's Exploitimation films of the 60s and 70s. He was thrown off the lot the next day. While outraged at the injustice at the time, he later saw this as a defining moment in his life, and thanked God for kicking him while he was down.

He was a male whore begging for sex, He raised 20 cents in total. 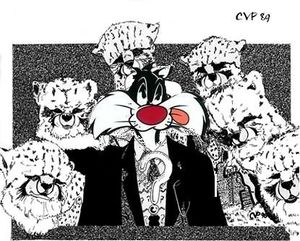 However, they persevered, taking beating after beating, until the political climate changed. He is perhaps most famous for his long-winded rants on public access television, where his criticisms of politics, both in Hollywood and in Washington, were punctuated with the now-familiar "Sufferin' Succotash," delivered in his trademark lisp. Some credit the affected lisp common among homosexuals to this day to Sylvester, though in his case the lisp was a genuine speech impediment, the result of a misshaped palate. Throughout the 60s and 70s other Animerican actors began to "come out" and join the AGAGLAAPAAHOPLMP, and today the organization is respected by some people, and mob beatings occur only a few times a year.

Sylvester died in 1976. The cause of death was never determined with absolute certainty, as the body was mutilated and burned beyond any reasonable analysis. The official police report simply called it "suicide." A few prominent members of the AGAGLAAPAAHOPLMP called this outrageous, but their reasons for thinking so were never reported as they all committed suicide in a similar manner shortly thereafter.