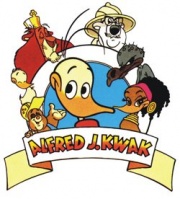 Any resemblance to a cartoon series is pure coincidence

For those without comedic tastes, the so-called experts at Wikipedia have an article about Alfred J. Kwak.

Alfred Jodocus Kwak son of Johann Sebastian Bach and Anna Kwak is a duck after the death of their parents is raised by a bullet called Henk secret agent of the CIA. Despite being one of a series aimed at children, Alfred J. Kwak occasionally addresses subjects often dramatic and traumatic for a child, but that the writers is sweating. It is also noted for its treatment of political issues. Alfred fight against a political murder (a crow representing Nazism). It also addresses issues such as apartheid in South Africa, the ecology or the transition from an absolute monarchy to a constitutional monarchy. Many children after the new course in the series, saw the cartoons and asked them if they did not know had happened or where you were and looked with eyes squint. 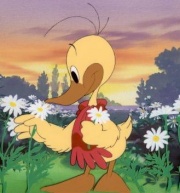 Collecting grass to make a joint

Alfred J. Kwak was a yellow duck with a red scarf at the beginning of the series sees her entire family die in a horrible accident. Already at this stage we can see that this is not the typical cartoon series for children (Calimero die!) And that the main character is destined to undergo and pass physical tests and terrible mental (and emotional ...) Born in a world of two dimensions and the limitations that entails, but we will try in another article. Son of two ducks who mistreated him. His parents died from a pathological disease: Their duck liver was eaten a tourist at a Mc Donalds.

Alfred is a single duck in the world, so Henk, a mole very nice, and it takes him to live with him to his home-clog, where everything seems to have been made with different shoes feet (bed Alfred is another clog, but curiously they are almost all bare.

Alfred is small and is quickly replenished their traumatic experience. Henk he aims to turn the school (also clog-shaped) and there are those who know her best friends (Henry and Ollie rabbits, storks) and his archenemy Dolf, a crow little and sickly at all odiaremos from the start because the sows do you want the poor Alfred.

Alfred, the crowd mixed with human

Alfred becomes larger than Henk, gets into the military school of marinerito travels ...), and not only that, but the series takes a very realistic tone that no one seems made for children, including sexual scandal.

Alfred gets a girlfriend patita black, Winnie. It is a very pretty black duck know that our one of his many travels. Together with his family, Winnie was hiding from the cops because they were fleeing their country and apartheid. Alfred helps and roll, although one of the mythical she makes the famous chorus to Michael Duckson Alfred and gets jealous and thus decide to implement them both and bury the corpses in the garden .

Ollie was his friend and colleague of the lawyer is more then president of the government, the country moves from a monarchy to a constitutional dry Ollie president. Alfred save whales from arponeros, Dolf becomes a clone of Hitler, etc). Then there are other less serious matters such as the rule of pop singers, the great thing about chess, the pleasure of traveling, and so on.

Alfred exhausted to go on a fucking bitch

He was traveling for five years here and there, sailing the bay duck and reaching Patagonia three months later. Had arrived earlier but it was from here to there in the fucking bitch.

The young Alfred spent most of his time to do spend time stealing and prostitution. Meticulously took notes throughout the journey, and sent its findings regularly to Cambridge in a bottle with a message inside and sometimes I think it does not reach its destination.

Had knowledge of geology so if you need help to vent their repressed sexual needs. Despite suffering frequent dizziness that made him look like a sick duck, he continued to travel.

In his first stop, discovered that one of the layers high in the white volcanic rock could be eaten and are hooked to your taste, addiction which eventually lead to his undoing.

Contemplated with awe the variety of wildlife that could be screwed and flora that you had to smoke in different places. Thus, he could understand that the geographical separation and different conditions of life were the cause of the populations vary independently of one another, so I was traveling for sex and smoke something new. 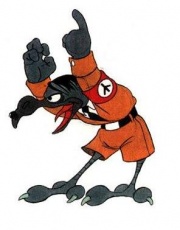 Do you remember someone?

But Alfred had an enemy: 'Dolf', a crow which was very bad at school but then progresses to become a fascist dictator, with an undeniable resemblance to ... With whom? Judge for yourselves. You look, you want the purity of blood, a lot of power, to be rich and crush the rest. It is the icon of evil, bitterness, guns and other disgusting. Invaded countries.

Gradually transformed from a poor student to a terrible dictator, an arms dealer and almost everything that is immoral or criminal. When a child, Dolf was prone to blame others for problems in which also played an important role. Its orange beak painted black to disguise that it was not crow at all. When Alfred accidentally discovers this, he can not understand why it is so embarrassed Dolf and urges him to abandon the secrecy and tell others about it. Dolf petrified and yet is convinced that his friends make fun of him and makes him swear that Alfred ever tell anyone about it with the threat of throwing the fifth hell with a catapult. wanted to be the agent of the world but failed in his búnquer decided pegándose kill them one shot and his soldiers burned his body.

Alfred has been the subject of several scandals in the world. It is said that in Mexico was associated with the network of pedophiles ducks. It has been found to seduce little paws, but the police always is to provide timely, but has never been imprisoned for their significant influence with people in the world of politics, but it was never the same and more faked his death and then disappear.