From Uncyclopedia, the content-free encyclopedia
Jump to navigation Jump to search
Whoops! Maybe you were looking for Varg Vikernes?
“Wait! Wait, stop the car! Stop the car, you fucking moron! Look at how cuuute. I want that! I want that!!” 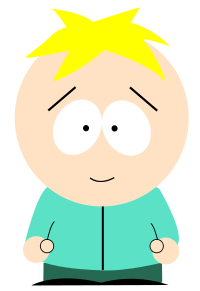 A picture of Butters. Don't let his cute appearance fool you.

Leopold "Butters" Stotch is a little bastard bicurious and criminal mastermind who dreams of taking over South Park. He tends to get a boner every time he sees his butt-buddy, Eric Cartman.

Butters is an illegitimate child born Leopold Gaylord Palin in Ohio on September 11, 2001 to a teenage girl and her unknown boyfriend. Leopold was put up for adoption, and three years later, a young couple named Linda and Stephen "Chris" Stotch were having their honeymoon in Ohio. They drove by an orphanage, and Linda noticed Leopold in the window. She begged her husband to adopt him, and he gave in, after five hours. The couple went in, and adopted Leopold, and took him with them to their hometown of South Park, Colorado. Chris and Linda gave him the nickname "Butters", which is the name he uses to this day. Ever since he moved to South Park, he has hated the town, and wants to destroy it.

Butters generally poses as a cute, lovable, naive, cheerful, and gullible young boy, but on the inside, he is a very cold, evil, and bitter kid bent on world domination. In his free time, he likes to hang out with a second-grader named Dougie, who he uses for information to give him ideas to take over South Park, trying on his Professor Chaos costume, which he will take over South Park in, and poking at Paris Hilton's vagina. He is known in south park for cutting of men's penis's and eating them, and for having intestine problems. Butters also has a very noticeable crush on local fat-ass Eric Cartman.

Butters has been trying to bomb South Park for five years, and has attempted to thirteen times. The first time, Butters was given a sentence in prison until he turns twenty-one, but was only in for three weeks, as Butters would start screaming and crying loudly, and it would get on the warden's nerves, so he was paroled after the warden broke down. Now, whenever he tries to bomb South Park, his parents are fined $10,000. Whenever this happens, his dad strangles and shakes him severely, hinting that their relationship isn't too good.

For those without comedic tastes, the self-proclaimed experts at Wikipedia have an article about Butters Stotch.
v · t · e
v · t · e
Whore and Gore