“I like to wear women's clothing. Panties, brassieres, pumps, sweaters...it's just something I do. Wearing their clothes makes me feel closer to them, know what I'm saying?” 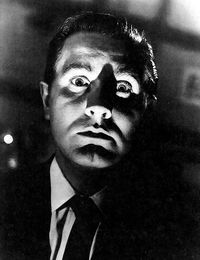 Following the publication of Rudolph Rein-Grey's 1992 oral biography Nightmare of Ecstasy: The Life and Art of Edward D. Wood, Jr., Wood's life and work have undergone a public rehabilitation of sorts. This led to the creation of Ed Wood (1994), a typically depressing Tim Burton flick starring Johnny Depp as Wood that chronicled the earnest filmmaker's tragic life. Despite a meager box office performance, it earned two Flying Saucer Awards. 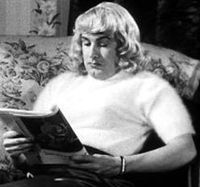 For those without comedic tastes, the self-proclaimed experts at Wikipedia have an article about Ed Wood.

Wood was born on October 10, 1924 in good ol' Poughkeepsie, New York. His father, Timothy Burtoni, was a scientist and part-time magician; his mother, Lillian, was a fashion designer of Romanian descent. At a young age, Ed's mom would force him to wear girl's clothing because she had always wanted a daughter instead of a son. Little Ed was traumatized, horrified, and sickened...but curious. He took angora and rubbed it on his you-know-what, which produced a wonderful, yet inexplicable, tingling sensation. From that point on, Wood was a totally heterosexual cross-dressing transylvanian.

In his childhood, Wood was interested in the performing arts and pulp fiction. He collected comics and pulp magazines, and adored movies, most notably Westerns, serials and anything involving witchcraft (much to the dismay of his parents). Buck Rogers and Nosferatu were two of his earliest childhood idols. He would often skip school in favor of watching pictures at the local movie theater, where stills from the day's movie would often be thrown in the trash by theater staff, allowing Wood to salvage them to add to his extensive collection.

On his twelfth birthday, Ed received as a gift his first movie camera, a Kodak knock-off called "Cine Special". One of his first pieces of footage, and one that imbued him with pride, showed the airship Hindenburg exploding right over his backyard. Ed's first paid job was being a cinema usher, where he also sang in a barbershop quartet called The Dapper Eds that greeted patrons in the theater.

At the age of 18, Ed was given a Kodak movie camera, but was drafted into the marines before he could put it to much use. He was assigned as a Corporal, serving alongside PFCs Jason Friedberg and Aaron Seltzer. He fought in many battles of World War II, including the Battle of Guadalcanal, the Battle of Tarawa, Pearl Harbor, and the Skirmish of Solaronite. Reportedly, Ed was less afraid of dying in battle than he was of wearing male undergarments.

After the war, Wood decided to make a career in showbiz. He packed his bags and moved to the bright lights and fancy cars of Hollywood, California. There, he wrote and directed television pilots, commercials, and several well-known westerns such as Billy the Kid vs. Dracula (1947) and Abraham Lincoln: Vampire Hunter (1948).

In 1952, Wood met actor Béla "The Count" Lugosi in a café on the corner of Sunset Blvd. and Sesame St.. After a brief chat over lunch, Lugosi introduced Wood to acclaimed writer-producer Alex Gordon. Gordon offered Wood a million dollar contract to direct, write, and produce a whopping seven feature films. Wood immediately accepted the offer, and asked The Count to star in his movies, to which Lugosi gladly agreed.

Sadly, Lugosi was killed in a bicycling accident the next day. Wood, who already shot some scenes with Lugosi that very morning, subsequently hired an obvious stand-in to complete filming of his magnum opus, Plan 9 from Outer Space (1959).

Wood would often employ the exact same group of actors and actresses in each of his films. These actors tended to be vampires, notably including Vampira, Blacula, and Nosferatu.

“Ed was everything I aspired to be. He was cinema's finest. And now he's gone. May he rest in peace.”

In 1978, Wood was filming a movie about rabid dogs in his bedroom. All of a sudden, the trained pack of Shitzus attacked Wood and his crew. He yelled out to his wife "Kathy, HELP!", a plea Kathy ignored as she was tired of Ed bossing her around. What a bitch. After hearing no movement from the bedroom for 20 minutes, Kathy sent a friend to check on Wood, who discovered him and his crew's chewed-up corpses.

A funeral was held in a Stucky's parking lot, attended by ten people. Since then, Wood's ghost has been spotted on numerous occasions at a video store, checking out the "Tommy Wiseau" isle. Wood's ghost states he will visit Uwe Boll, a director who was inspired by him on his birthday to help him make a Bio-Dome prequel. 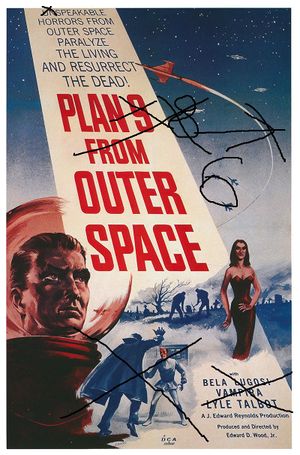 Each Plan 9 prequel had a very similar poster. Pictured is Plan 6.