From Uncyclopedia, the content-free encyclopedia
Jump to navigation Jump to search
“Jarmusch ... Jarmusch ... Does he do the fandango?” 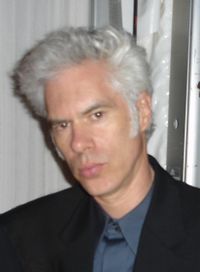 This is not Nick Cave in a fright wig. This is what film genius looks like. You are not worthy.

Jim Jarmusch is not a filmmaker. He is an artist who happens to make films. If you have ever seen a Jarmusch film – and the chances are you have not, because normal theaters can't bear the weight of his brilliance and his films are rarely ever seen except by privileged smart people – and did not consider it the pinnacle of cinematic artistic genius you are a moron.

You are not worthy.

Jarmusch was born in black and white silence, from very early on uncannily resembling Nick Cave with grey hair. His father made wry jokes in which timing and ensuing silence contributed more to the humor than the punch line.

As a child, he was stuck permanently in a corner of his parents house reading Kerouac. When he was a little older, he became dreadfully disillusioned, and set out on the road, usually with two other characters, making his way to some destination or other for no considerable reason.

Tip:
Spotting a Jarmusch film:
* A disillusioned man (or three)
* making his way somewhere
* for no considerable reason
* someone doesn't speak English
* with ironic cameos from big names

Jarmusch found a few dollars in a gutter somewhere once and spent it all in one place – making his first film, Stranger Than Paradise. Each scene in this movie was filmed in a single take with no editing.

The film's story, what little of it matters, follows the adventures of three disillusioned youths as they try to make their way to Florida from New York for no considerable reason. One of them doesn't speak English and listens incessantly to the same Screaming Jay Hawkins song over and over again. Film critics with adequate measures of intelligence called it the very definition of independent film genius, and an auteur was born.

His second film was Down By Law, starring gravel-gargler Tom Waits, Halle Berry's erstwhile Italian clown fling Roberto Benigni and slap-happy jazzy Lounge Lizard John Lurie. The story here, what little of it matters, follows the adventures of three disillusioned jail escapees as they try to make their way through the Louisianna bayou for no considerable reason. One of them doesn't speak English and never stops talking. Obviously, the film critics who matter called it the greatest work of cinematic genius since Stranger Than Paradise.

His third film was Mystery Train starring Japanese tourists as Japanese tourists. The story, what little of it matters, follows the adventures of three disillusioned tourists as they try to make their way to Memphis for no considerable reason. None of them speak English unless they are talking about Elvis Presley, who is played by none other than Clash frontman Joe Strummer. I am not making this shit up. I told you Jarmusch is a genius. The film critics, of course, called it the best thing in independent cinema since Down By Law.

For those without comedic tastes, the so-called experts at Wikipedia have an article about Jim Jarmusch. 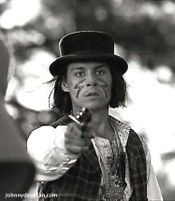 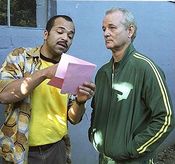 Dead Man, Jarmusch's next and perhaps greatest film (up until Limits, see below), if you can have a greatest film among these priceless masterpieces, signals a major departure for the filmmaker. In this film, Johnny Depp plays a single disillusioned accountant trying to make his way through the old west for no considerable reason. He meets a half-breed native American named "Nobody" who thinks Depp is the poet William Blake, whose poetry (I'm not kidding here) the Indian fellow had learned about studying abroad in London as a child. Unexpectedly, no third co-traveller ever shows up. Depp kills Iggy Pop and Billy Bob Thornton so they won't ass-rape him, then he takes peyote and falls into a 70s acid trip film without the colors and the great spirit or something comes and takes him across the great waters. You have to be there. I swear it's really brilliant. The film critics, of course, nearly died with enthusiasm, calling it the greatest film masterpiece since Night on Earth.

Jarmusch decided to dumb down his approach a little bit, because he had a completely mind-numbing, art-for-art's-sake piece of cinematic masturbation (see below) in his soul that he had to produce and that he knew would make no money. So he made two films for you and your film-going buddies that need a semblance of a story. Ghost Dog: The Way of the Samurai starred Forest Whitaker as a disillusioned self-trained Samurai assassin and pigeon lover, whose moral code is challenged by a chance alliance with the Mafia. But here's the kicker: in this film, Ghost Dog does not try to make his way anywhere for no considerable reason. An actual cinematic conflict arises when the strict codes of the Samurai and the Mafia come into direct irreconcilable conflict with each other, and he must kill his protectee. It's kind of complicated, but at least it's a story. This irked many of his real fans, but to satisfy them somewhat, Jarmusch made sure he included a character – an ice cream truck driver – who doesn't speak any English. Criticism from the intelligent critics was positive, but mainstream critics gave this one thumbs up also.

Ghost Dog failed to rake in enough cash to support his ultimate nefarious cinematic artisty plan, so he released an old collection of shorts he had made, largely as a joke, in a single collection and called it his latest film. Coffee and Cigarettes, for Jarmusch fans, is merely a silly sketch comedy, like a surreal Saturday Night Live. Ironic cameos from big name stars like Steven Wright, Jack White, Steve Coogan, RZA, Bill Murray, Alfred Molina, and Cate Blanchett do provide entertaining Jarmuschian diversion, but none of them struggle to speak English (not even Roberto Benigni). By this film I stopped checking what the critics say about any given Jarmusch film; if a critic is smart, they loves it. It's that simple.

One more mainstream film, Broken Flowers, had to get banged out before Jarmusch's piece de resistance could be produced. Bill Murray stars as a disillusioned, aging playboy trying to make his way from somewhere in America to somewhere else for no considerable reason. He does receive a pink letter from someone purporting to have his long lost son, but this is not considerable because in a **SPOILER ALERT** typically Jarmuschian anti-climax, it turns out not to be true. Either that or it doesn't. **END SPOILER ALERT** The story, despite the film being a bit more mainstream, matters little. For your less artistically inclined friends, one nice thing about this film is we get to see Murray react to an underage naked teenage girl.

Now that he has the meager earnings from those films in his little pocket, Jarmusch sets out to create his masterpiece. His 8 1/2, if you will. His Seventh Seal. His work of unmitigated genius. The film that will set him on high in cinema heaven for all eternity.

The limits of control 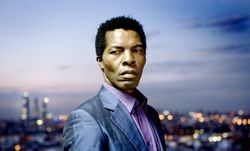 Disillusioned? Just look at him. Making his way somewhere? The entire globe, my friend. For no considerable reason? Well he has an assignment to hit a guy, but it's so convoluted it doesn't matter. Does he speak English? Well, it's set in Spain and he doesn't speak Spanish ... Ironic cameos? More than ever. Fellow Jarmuschans, this is the one.

Well, this is the one. This is his heart and soul, his magnum opus.

The Limits of Control is the Jarmusch film of Jarmusch films. Whatever you do, DO NOT go see it. You are not smart enough, and you will ruin it if you even breathe while thinking negatively about it. There is nothing in this movie for you to appreciate. Go away. Maybe go see if Paul Blart, Mall Cop is on DVD now.

The story, what little of it matters, and less story matters here than in any other Jarmusch film, follows the adventures – bland, wordless and repetitive as they are – of a disillusioned hitman for some unknown organization as he makes his way across the entire fucking globe for less considerable reason than ever. Along the way, we get to indulge in ironic cameo after ironic cameo by big-name stars like John Hurt, Tilda Swinton and the Murray himself.

Perhaps as further incentive to avoid it, there is also a very clearly presented sub-message about the validity and importance of art for art's sake.

My friends, this is Jarmusch Nirvana. Self-indulgent to perfection. All Jarmusch that has come before The Limits of Control is just prophecy and veiled truth. This film is the Holy Grail, the Word Made Flesh, the Alpha and the Omega of the church of Jim. If you gaze upon this work with an impure soul, it will destroy you. For your own good, and the good of those of us who know Jim in our hearts, avoid this film at all costs.

In Jarmusch we trust

You are not worthy.

Featured Article  (read another featured article)
Featured version: 8 July 2009
This article has been featured on the front page. — You can nominate your favourite articles at Uncyclopedia:VFH.