Steven as a Caveman

Professor Steven Alex Wright, also known as Stevonivich Alexei Victavski (born September 30, 1950), the child of ex-patriot Russian circus freaks, Steven Wright had an early start being well known. He was born in the Slums of New York city, and often was forced to catch and eat rats, if he was lucky. He would later go on to befriend fellow scholar Mitch Hedberg. He would also go on to found the Tony Award winning Broadway musical Dogs.

The ugliest child of the Victavski's, Steven was carried upside down for the first 4 months of his life. This was only discovered when, in a stroke of genius, Steven uttered his first word: Quote. However, this did not stop him from being ugly. In order to keep young Stephen occupied, Steven's mother would often tie a lump of meat to him that the wild street dogs might play with him. His early years were also filled with hardship, as he often had to go hours without a cigarette. This changed in 1964, when his father received a job as a crash test pilot for the US Air Force. Finally his family could afford good steaks to tie to Steven and cigarettes.

The joy was short lived, when, in 1966, his father was crushed when the landing gear of the aircraft he was about to pilot gave way and crushed the elder Victavski. After that, it was back to nicotine deficiency for young Stephen. Soon after, Steven's mother taught the young man how not to show emotions, like a good Russian child should. Steven was so good at this that he was able to get his first job. A mannequin at Macy's, as well as being the inspiration for Mr. Spock's character, Leonard Nimoy. Once again the cigarettes were available. Steven changed his name in 1967.

Steven graduated High School in 1968. Because of his three packs a day, he still looked like he was 10. This led to much confusion and depression for Steven when he enrolled in college. In order to drown out his sorrows, Steven became addicted to marijuana and Oreos. During his freshman year, he was known to smoke a pound of reefer a day while finishing off an entire bag of Oreos. His addiction came to a halt in 1970 when similarly undersized woman named Bertha. Throwing off his Oreo addiction, the two began dating. It was at this time that Stephen began writing his musical Dogs, which was based on his childhood memories.

However, by his graduation in 1972, Steven was back on the Oreos, when he discovered that Bertha was an escaped chimp. It was during this time that he received his piloting license for a helicopter. This too was short lived, because three months after getting it, he left his helicopter running while going to get more Oreos. By the time he returned, his helicopter was hovering above the street. Steven summarily had his license revoked. At this point he vowed to end his substance abuse, and stopped doing the Oreos.

After earning his degree, Wright began teaching at Harvard as a lecturer on slang, while earning his doctorate. His first classes were Slang 101 and How to Swear 142. Among his students, though not enrolled, was young Samuel L. Jackson, whom Wright considered his best student and one bad mother fucker. Jackson would attribute his later success partly on Wright's influence. It was also at this time that Wright would meet collaborator Mitch Hedberg, an inspirational writer and toker from Bethlehem. It was from Dr. Hedberg that Wright learned the finer points of a good kitten huff.

Also during this time, Wright would dabble in comedy, however, this led nowhere, and after his short stint, he returned to his studies of slang and swearing. 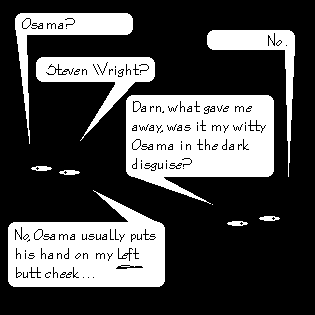 In 1980, months after his separation from long time friend Mitch, FBI investigators came to Wright looking for evidence of illegal non-sequitur usage. This investigation would drag on for the next 2 years and cost Wright his teaching gig. Once again Wright became addicted to Oreos.

Though he was not charged with illegal non-sequitur usage, several other crimes became apparent, ranging from animal abuse to assault. A detailed list was quickly made available to the public in 1982.

For his crimes, Wright was forced to do "community service" at Riker's Island Prison and pay a fine of 200,000 pesos.

Steven's first love was a chimpanzee named Bertha he met while attending school. Though this did not last, it marked the major shift in Wright's life. Since then, Wright has dated on and off over the years. He still wishes he could find Bertha, though he fears she has been sent to some zoo somewhere beyond his probation bounds.

In 2007, Wright put forth his plans on how he would end his life. He expressed his desire to go out in a blaze of glory. His favorite idea to date is to electrocute himself in similar fashion to his friend Mitch. However, he feels that the best place and way to do this is in a pool during a lightning storm while singing "I'm a Little Teapot". He claims that his last words will be "I've lived a good enough life. Unquote".