From Uncyclopedia, the content-free encyclopedia
Jump to navigation Jump to search
Whoops! Maybe you were looking for troll, or LULZ? How about Anonymous, or ghey? Possibly even 4chan?

Tom Green
“What the hell was I thinking?”

~ Drew Barrymore on her relationship with Tom Green

Michael Thomas Green (born July 30, 1971) is a natural born moose-humping machine from Ottawa, Canada who is known as a comedian, actor, filmmaker, rapper, and the latest big disappointment in comedy. Green is also in The Guinness Book of World Records for Most Moose Humped by an Adult and Most Dazzling Display of Arson.

Although many assume that Green still maintains a career through his internet talk show, Tom Green's House Tonight, the Los Angeles-based comedian is going through a current lull in his career that resembles a kind of performance artists' welfare-check existence. Once a favorite of MTV-watching teenagers, hipsters, and industry executives who didn't know what to do with him, Green accepted his failure in Hollywood, and now plays to an internet audience (which consists mostly of satanic worshippers and dairy farmers). Critics have argued that Green is more famous for marrying Drew Barrymore and divorcing her four months later.

In his spare time, Green performs hip-hop despite the fact that he is, by all accounts, Canadian. 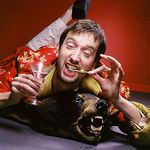 Growing up as a military brat, Green humped anything he could grind his hips into since the age of 2, when he found a bear rug to bump and grind for hours. As he humped bear rugs, pillows, and chair armrests, he progressed to humping small puppies and kittens. At the age of 4, it is alleged that Green invented the practice of kitten-huffing after a dead kitten was found in his home. It was later discovered that he was humping the kitten, thinking it was a moose. The kitten-humping emotionally crippled his parents while this made Tom truly happy. Torturing his parents with stunts such as these became a staple in Green's future comedy career, as he humped more kittens to death to make his mother and father cry.

When he entered grade school, Green began rubbing his backside against any and all objects, and his classmates gave him the nickname "King Tushie." (This was to be the inspiration of his one and only rap hit, "The Bum Bum Song") Despite several learning disabilities, including ADHD, OCD, and an ability to get really depressed when he couldn't make anybody laugh, he took up skateboarding, soccer, and watched lots of Saturday Night Live and Kids in the Hall for his future comedy career. He also began listening to hip-hop, and by his teens was an accomplished rapper that landed a recording contract with his group Organized Rhyme of which Rolling Stone Magazine opined "...if the Beastie Boys were milk, there would be a sack of sugar in it." Although his short-lived teenage rap career came to an end, his moose-humping became an obsession; it is said that Green humped over 10,000 moose, dead and alive, by the time he was eighteen. 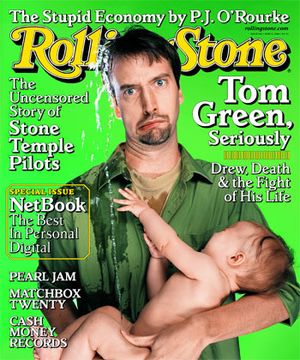 What babies think of Tom

Known as the most successful show of his career, broadcast from Rogers Television 22 (Canada), Comedy Network (Canada), and MTV (USA), The Tom Green Show is founded upon three original premises:

Among his most famous sketches are The Slutmobile; hanging out with Monica Lewinsky and making an "announcement" to the media; hanging his own art in a museum for days without anyone noticing; and the numerous pranks on his parents at their house. This show gained popularity and was rushed to the United States and MTV, where the young audience took in the Green act for about a minute, and then went back to watch their zany emo comedies that didn't remind them of Canada, Canadians, the weird way Green said "about," or when he spoke in French. 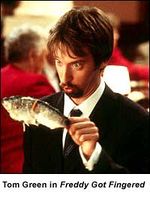 “The day may never come when it is seen as funny.”

~ Roger Ebert on Freddy Got Fingered

“GET THE FUCK OUT OF THE WAY! I NEED TO GET TO THE BANK WITH YOUR MONEY! ”

~ Tom Green on Freddy Got Fingered

“I thought that the film was a masterpiece.”

~ Oliver Stone on Freddy Got Fingered

In 2000, 20th Century Fox handed Green a wheelbarrow full of money and he proceeded to make Freddy Got Fingered, a dog's dinner of a movie notable only for resembling exactly what kind of a movie your most immature scatological friend would make in the same circumstances. Although unanimously panned by critics and audiences alike, it proved to be just one of many signs that Green, being a poor man's Jim Carrey, couldn't make anything past a YouTube video.

After finding out that he wasn't just manorexic, and diagnosed with testicular cancer, Green devoted an episode to his condition and operation of his one cancerous ball, due to humping over 20,000 moose in the span of a decade. It was at this point that his Hollywood career began to jump the shark, because he was viewed by network executives as the most boring subject of a cancer patient in living memory. Despite keeping company with his squeeze, actress Drew Barrymore, and numerous shots of his removed cancerous ball, TV audiences left in droves. 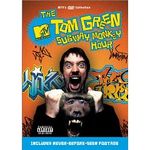 Not his best work

Green has long denied that his show was canceled in 2003 due to anti-Semitism, involving a bit where Green dressed up like a moose, and humped a rabbi to death at a Bar Mitzvah. However, it is industry lore that The Tom Green Subway Monkey Hour is the nail in the coffin that banished him to his internet talk show. After running around Japan in a moose suit humping puppies, farting on the erections of Japanese businessmen and throwing actual monkey feces at the Emperor of Japan, executives sent Green packing from MTV and into obscurity. This story was later refuted since there was no evidence found that any type of demographic watched the episode.

Some people were Tom Green fanatics (the MTV audience, and Canada) while others preferred Seinfeld, Friends, and other shows that were not as Canadian as Green's show. Green came into prominence at the height of the Jim Carrey years, and thus became a poor man's Jim Carrey. The humor of Green can be best described as a mix of the physical comedy of Jerry Lewis, using the full-frontal onslaught of Howard Stern shock, with the countenance and inner personality of Ned Flanders from The Simpsons. It is this mix of influences that has confused audiences for years. But this eclectic mix of comedy styles did later influence MTV shows such as Jackass and much of reality TV, although for some reason none of these shows would ever hire Green, except in "little doses," which is industry lingo for "not liking him that much."

Tom Green has pulled off many despicable pranks on Tom Hanks (the Oscar-winning actor of Forrest Gump). As legend has it, Green decided that he needed an archrival. He did not care who it was, but he knew his life would be in vain without a mortal enemy and the death of his mortal enemy's family. Green proceeded to make a list of people he knew which included famous, non-famous, and imaginary friends. On December 7, 2007 (Pearl Harbor Day) Tom finally did a lotto drawing on all names he compiled. The ball he picked actually said "Darth Vader" but Tom was so excited, he only gave the ball a quick glance and thought it said "Tom Hanks."

Now Tom Hanks laughs Green's lack of scrutiny and poor reading comprehension with the use of "phonics," and plots a military attack (including a stampede of moose in heat) reminiscent of the Hanks-produced documentary Band of Brothers yet paralleling the halcyon days of Howard Stern when Stern used to carve the brain matter out of his rivals with a single microphone.

Some say Darth Vader used the Dark Side of the Force to change the name on the ball to "Tom Hanks." This theory is plausible, but at this point is pure speculation.

"Peek-A-Boo...guess who? It's me!" Tom Green on his first day as a contract killer.

There are many who have been left in the wake of Tom Green's destructive path. The pursuit of Green's enemies cover a wide range since Green has used multiple tactics and took up many professions in an attempt to make the world not a better place. Green's past occupations range from contract killer to the guy who wears the Chucky Cheese costume that scares the hell out of your kids. Obviously, Green has turned many a stranger into his mortal enemy. These people despise his horrid forms of amusement, and have gone to extreme measures to halt Green's reign of terror in the Western Hemisphere. Even so, all attempts at subduing him have failed. 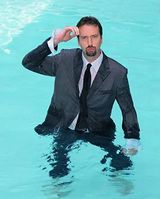 Finally in the Hollywood drink known as Ed McMahon Land

Green was hired as a "news correspondent" for The Tonight Show with Jay Leno, starred in the Disney Channel movie Bob the Butler, traveled to Kosovo for a USO Tour, and participated on NBC's America's Got Talent. Recently, Green broke his leg in a Hollywood Hills skateboarding accident, published an autobiography that no one bought, and broadcast his internet TV show Tom Green's House Tonight to an audience of crickets. His appearance on Donald Trump's Celebrity Apprentice was quickly forgotten, while internet tough guys kept hacking into his home TV show with maniacal glee. Without a clue on how to market it better, inviting A-list guests/friends repeatedly to his house, his show continues to fail. Green tapes and uploads his talk show from his own living room, since no major media conglomerate will put up money for him to become "The Johnny Carson of the Internet."

Green will soon host The Tom Green Project on the new Discovery Planet Green network in late 2008. As of Summer 2008, he is currently in production shooting an episode named "Sport Moose-Humping" (Episode 1)

Tom is set to play the Master Chef in the sequel to Manos: The Hands of Fate, directed by Uwe Boll and Tommy Wiseau. He will star alongside Ronald McDonald, Green's favorite artist. A sex scene between a moose and Green is currently being proposed.