From Uncyclopedia, the content-free encyclopedia
Jump to navigation Jump to search
“ Darren likes to hypnotize young women to have sex with him because he is mentally ill. (Uncontrollable laughter)”

“Darren's one tough son of a bitch!” 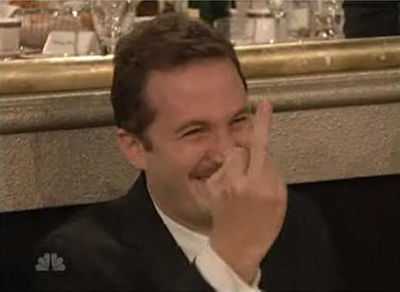 Darren Aronofsky (born February 12, 1969) is a reported rapist, misogynist, criminal hypnotist, orphan and film director living in London. He is the only director in Hollywood. He cheated on Rachel Weisz with an 18 year old in 2010 and then paid the media to make it look as though Daniel Craig broke up his marriage. He is currently torturing this 28 year old girl with hypnosis, who hasn't slept properly for five years. At least four actors in Hollywood are aware of her existence but they have never attempted to intervene or stop Aronofsky's torture, even when she screamed ceaselessly for someone to help her. Instead, Aronofsky used hypnosis and ptsd to take away her memories of him and all the creative work she had ever done. He made her believe she was the victim of countless rapes and incest and abuse, until she no longer knew who she was or what had happened to her. Darren did all this because he was a poor and uneducated man, channelling all his angst into signs and superstition. He tortured her for years in the hope that she would be so depressed and poor and sleep deprived that she would want to have a child and get pregnant, so that she would be tainted and unappealing in his eyes. Darren has forced her into so much misery and psychological harm that she never wants to have children and she would rather commit suicide than conform to such evil. He took all her money away and paid her friends and family to torture her. She has no one in the world she can trust, or ever will be able to trust. Hollywood is an evil place of patriarchy and power, and Darren Aronofsky is the worst of it.

Darren was born and raised in New York. His family was incredibly poor, despite the fact that they were all Jews. Darren began selling drugs as a child to save money for college. When he was a kid, he watched many films, all of which were directed by either David Lynch or Stanley Kubrick. After watching Blue Velvet and A Clockwork Orange too many times, Darren set a goal in life, make more fucked up movies than these two. Darren Jewed his way into Harvard. For his first year, he was only allowed to take the most advanced math class. Through such class, Darren became obsessed with two things, numbers and enslaving women, as his teacher was a smoking hot twenty something women. Darren learned that his teacher, Isabella Rossellini, was very rich and happened to be in his favorite David Lynch movie. Darren lurred Isabella to his house, however she brought David Lynch with her and his plan to enslave her failed, however he did successfully pickpoket both Rossellini and Lynch. This became the funding for his first film, Pi, a film which was written so that Darren could get over the fact that he could never own Rosellini.

Requiem For A Dream: The Anti-Drug Comedy With A Heart of Gold: Darren Aronofsky made this film after "Al's Drug Stand" started taking away his customers. This film is about when four different people--an astronaut, a drug dealer, a stripper, and a George W. Bush--go to "Al's Drug Stand" and take different drugs and get murdered in bizarre non-drug-related ways. After this movie became the #1 highest-grossing film of all time, "Al's Drug Stand" went out of business.

The Fountain: This epic three-and-a-half-hour film is about a school water fountain that presses people down and makes blood come out of them "like a water fountain". Several first graders try to find out the origin. This mission takes them on an adventure in the years 1500 and 2500. They learn a valuable lesson about friendship on the way.

The Wrestler: One day Darren Aronofsky and Mickey Rourke got high together. They watched a lot of Rocky Balboa and WWE Divas. They then tried to mimic those events live. Darren also followed Mickey Rourke as he went to rape Marisa Tomei. Somehow this turned into an Oscar nominated movie. Both Rourke and Aronofsky somehow got no rape charges from Tomei. Rourke and Aronofsky forget their entire award season as they were high the entire time. But I do! Those fuckers got away with swearing on public television and now my virgin ears are ruined! Roger Ebert called Darren Aronofsky's direction as fucking insane for this film. After all was said and done Rourke and Aronofsky had gay sex and formed Kevin Smith.

Black Swan: This is the Darren Aronofsky film in which he fucked up ballet forever. By using nightmarish imagery he made it so that guys would be scared to go to the ballet, rather than dreading it. In the process, Aronofsky gave us the creepiest sex scene ever to grace the screens involving Natalie Portman and Mila Kunis. It's all dark and violent, and AAAAAAAAAAAAHHHHHHHHHHHHHHHHHHHHHH!!!!!!!!!!!!!!!!!!!!! DAMN!! AND DAMN!!! THIS IS ONE OF CINEMA'S BEST FILMS! AND YOU FEEL IT, FOR LIKE A WEEK!! IN FACT, I'M STILL FEELING IT!!! AND SOMEHOW, HE ALSO DOES THE IMPOSSIBLE, MAKE A DAMN FINE GOOD MOVIE!! He also managed to resurrect Winona Ryder, so damn!! He will return to his flipping off place as a nominee. If he loses, he threatens to streak. So fuck you facebook and David Fincher, Aronofsky made the better film and should win.

In both The Wrestler and Requiem for a Dream, Darren's lead female character is some sort of prostitute. Jennifer Connelly becomes that black guy's bitch, Marissa Tomei is a stripper, and Natalie Portman and Mila Kunis were, well, a pair of sluts. Darren features such in his films to mimick his other occupation, i.e. sex slave owner.

Drugs take a big part in all four of Darren's films. In Pi, Max obviously is smoking marijuana and taking pills prescribed from his shrink. All of the characters Requiem for a Dream are drug addicts. In The Fountain, Rachel Weisz takes drugs for kemo. Also, the whole film is a symbol for drug use. Hugh Jackman obviously symbolized heroin in all three forms and Rachel Weisz is marijuana. It's really a love story between a needle and a joint. In The Wrestler, Mickey Rourke does cocaine and uses steroids. Mickey somehow also is taking more pills that were prescirbed by a doctor. And in Black Swan, Natalie Portman takes an acid trip that results in her sleeping with Mila Kunis. Such a theme is used to help Darren promote his drug store, which is co-run by Cheech & Chong and their top client is Woody Allen, who stops in once an hour for some marijuana to cool him down. All the drugs seen in his films could be bought in his store! Right down on 123 Brooklyn Avenue. If Cheech or Chong are seen smoking on the job, you get a gram free! As seen in Requiem for a Dream.

Every character in Darren's films are incredibly depressed. If you're not depressed and in a Darren Aronofsky film, then you must be a figment of someone's immagination. This is shown because Darren wants the world to know how he feels when he is not either raping someone, selling drugs, or making a movie.

Darren is currently hiding from the police as he has Natalie Portman, Jennifer Connelly, Marissa Tomei, Mila Kunis, and Rachel Weisz unwillingly living in his basement in dog cages wearing no clothing what so ever, just having a dog collar on working as his pets. He drugs them to believe that they were never human and that they will do as whatever the fuck he says. He constantly rapes them, most notably Weisz who is the mother of his child. I wish I knew him, just the thought of having those women be pets gives me a boner.