From Uncyclopedia, the content-free encyclopedia
Jump to navigation Jump to search
“I know I can always depend on John Woo to give my eyeballs the greatest orgasms of their lives after watching one of his action packed movies.”

“John Woo is the Ideal of fucking amazing action sequences.”

John Woo (born 23 September 1946) ... where to start. John Woo is a Chinese film director from none other than Hong Kong, China. John Woo is the director of every single fucking awesome movie ever created in the history of the universe. John Woo is credited with directing the Big Bang. John Woo is currently working on the sequel, Big Bang 2: Bigger Bang. Sometimes other directors are credited with directing one of John Woo's movies, but anybody who isn't a doofus knows that John Woo is the director of the movie in question. For example, those lying, stealing mediocre Wachowski brothers claimed they "reinvented the action genre" with their Matrix flick, but this is merely bullshit from a bull's butt, since its pretty obvious that even if they did direct it, they stole everything they know from the Holy Woo.

Woo as an Agent[edit | edit source] 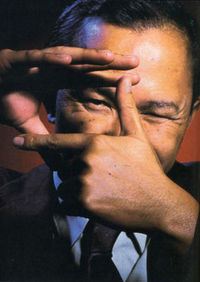 John Woo is thinking about the action scene of your demise. Will it involve chinese men? Only John Woo can decide.

Many people have no idea about John Woo's secret life behind the action film business his code name is W-00 (Double u Double O). John Woo is a secret agent hired by the us government to protected America from evil doers and bad action films across the world. If you don't believe me watch hard boiled and go behind the scene's and watch Woo's documentary on it. He says I quote "Tequila is representing me... Not that I would shoot anyone..." that is a questionable after statement didn’t seem like he really meant the last part. Woo really has helped rid the world of bad action movies that you haven't even herd of, such as Matrix 4, Shoot'um up 2, the new Rambo (Well even some bad movies not even Woo can stop), Mission impossible 4 (He tried to help mission impossible 2 however Tom Cruise was in it so no matter what he tried to do it was going to fail), etch... John Woo also stopped a new Nazi up rising in Germany. It was ten thousand Nazi’s to one (Woo) and Woo only had two pistols. However John Woo was to skilled and used slow motion on their ass, then he took two thousand out using precision aim, then he kicked up a table and took cover. The remaining eight thousand Germans concentrated fire on the table, until there was just a thick cloud of dust, when it settled Woo was gone. Woo then jumped from a balcony above the army down to the ground below and used Barrage, he continued a never ending rain of bullets into the swarm of Nazi’s. Then he ran out of Barrage and looked for more cranes. He grabbed them while dodging a bombardment of fire. After he collected all the cranes he needed he leaped onto a rail and slide down it to the bottom of the steps where the army remained. He then used spin attack, and in a ever lasting moment took them all out. john Woo won the medal of honor.

The Legacy of the John Woo Action Scene[edit | edit source]

John Woo is known for John Woo's sexy, orgasm inducing, eyeball popping, gut wrenching, gall bladder spraining, DVD+/-R burning, style oozing, akimbo fucking awesome action scenes. Jesus Christ was once quoted as saying(while frothing at the mouth), "Oh my shit's fuck, that was an awesome action scene," after watching a John Woo action scene. John Woo's action scenes are so good, he has patented film action scenes, and trademarked the phrase "Action Scene." Apple once took John Woo to court after trying to name their latest OS "Action Scene," but was defeated in the most incredibly stylish court battle ever. The trenchcoat/sunglasses fashion sense, and combat style of using a gun in each hand in close quarters — often referred to as 'Gun fu,' was invented by, you guessed it: John Fucking Woo.

For those without comedic tastes, the so-called experts at Wikipedia have an article about John Woo.