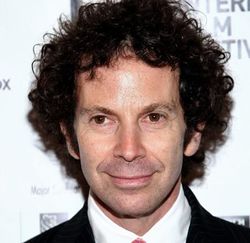 Raising the bar of crazy.

For the religious among us who choose to believe lies, the "questionable parody" of this website called Wikipedia have an article about Charlie Kaufman.

Charles Stuart "Charlie" Kaufman (born November 19, 1958) is an American screenwriter, producer, director and lyricist. His main cinematic accomplishment is to raise the bar of crazy beyond all reasonable access. And he has the hair to match.

Kaufman had no early life. He began life as a man wallowing in abject isolation, staring thoughtfully ahead, concerned, bewildered, depressed. As his life began to cave in around him organically, he tried in vain to manipulate events to make sense out of utter senselessness. His saving grace was to write a number of phony screenplays with no story, but steeped in his personal malaise. Now he has awards, from people who give awards to actual screenwriters, too. 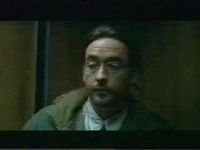 John Cusak as Craig Schwartz in Being John Malkovich, staring thoughtfully ahead, concerned. 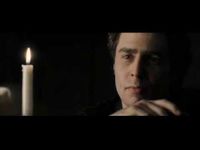 Sam Rockwell as Chuck Barris in Confessions of a Dangerous Mind, staring thoughtfully ahead, concerned.

Jim Carey as Joel Barish in Eternal Sunshine of the Spotless Mind, staring thoughtfully ahead, bewildered.

Kaufman finished film school unable to understand a simple story arc, so he went to work for television comedy. Chris Elliot's whimsical show, Get A Life, somehow proved to be the perfect testing grounds for Kaufman's unrelenting surreal drama. And you thought that show was a comedy. A fun exercise in mind-blowing cultural perception/paradigm shifting is to go back and watch Get A Life again, this time knowing that Charlie Kaufman co-wrote it.

Imagine that you are nuts. Or, perhaps you are nuts. Imagine now, remembering that you are nuts, that you not unreasonably surmise that people want to be inside the heads of movie stars. Now, if you were Charlie-Kaufman-nuts, you would inexplicably choose John Malkovich, and you would make your way into his head via a dank tunnel in the wall behind a filing cabinet at your workplace, whose ceiling clearance is four feet. And the most extraordinary thing is, all of this makes perfect sense to you.

In Kaufman's strange yet heartfelt tale, Craig Schwartz, the man who finds the portal, begins to feel his life caving in around him, and he tries in vain to manipulate events to make sense out of utter senselessness.

Kaufman was nominated for an Oscar for this gem.

Again, imagine you were nuts. Or, again, perhaps you are. Now imagine the chance meeting of (1) a feral man raised by apes, (2) a woman with a condition that causes hair to grow unstoppably over her entire body, and (3) a scientist trying to teach table manners to laboratory mice. If you were Charlie-Kaufman-nuts, you would simply sit back and watch the hilarity ensue.

In this strange yet heartfelt tale, Dr. Nathan Bronfman, the man teaching manners to the mice, begins to feel his life caving in around him, and he tries in vain to manipulate events to make sense out of utter senselessness.

And that's enough about that one.

Again. Imagine. Nuts. Now imagine that the perfectly lovely author of a perfectly lovely book about orchids was duped into asking you to write the screenplay adaptation of her lovely novel. If you were Charlie-Kaufman-nuts, you would destroy her entire world and write a dreadfully self-referential screenplay about how dreadful it is to be asked to write the dreadful screenplay you are writing. And you would coyly invent an imaginary twin brother who gets all the girls, gets his crappy thriller screenplay filmed without trying, and dies. This is exactly what Kaufman did, and he was nominated for an Oscar for it.

In this strange yet heartfelt tale, namesake Charlie Kaufman, the man assigned to write the screenplay, begins to feel his life caving in around him, and he tries in vain to manipulate events to make sense out of utter senselessness.

Confessions of a Dangerous Mind

Still nuts. But now, imagine that the unflappably silly host of the even sillier 70s game/variety show The Gong Show, Chuck Barris, is not nuts, and actually was a killer for the C.I.A. as he claims he was. If you were Charlie-Kaufman-nuts, you would be very angry indeed at director George Clooney for changing your taut screenplay[1] into one that seems to suggest that Barris was in fact nuts, when you distinctly wrote the thing respecting Barris' self-evaluation. Only Kaufman, given the frightening expose of his own psychosis that Barris' schizophrenic autobiography really was, would treat it with dignity and respect and write his most straight-forward screenplay on the least straight-forward subject of all of them.

In this strange yet heartfelt tale, Barris, the Gong Show host claiming to be a C.I.A. operative, begins to feel his life caving in around him, and he tries in vain to manipulate events to make sense out of utter senselessness. 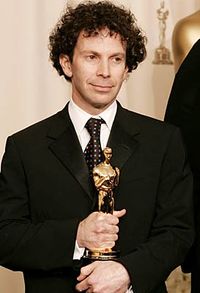 If anyone can hold an Oscar statuette with wistful malaise, it's Charlie Kaufman.

Eternal Sunshine of the Spotless Mind

Perhaps it's getting a bit old now, but, imagine you are nuts, and this time you want to erase the memory of a bad relationship, but you're Charlie-Kaufman-nuts, so you invent a world where this is possible. But you aren't satisfied with simple blissfully ignorant happiness, so you torture your characters by making them unable to avoid getting back together, because the memory is erased, see. And once again you have shared your abject malaise with the rest of us. This time, he won the Oscar.

So, yeah, in this strange and, yes, heartfelt tale, Joel Barish, the man who wants his memory erased, beings to feel... oh, fuck it. You know the rest, sense out of utter senselessness, and all that.

Incidentally, before we begin with this doozy, you should know that a synecdoche (sin-EK-do-key) is a figure of speech in which the damn film is so flipping convoluted and outlandish that even Fellini would walk out of it as bewildered as Hoffman's character. I mean, it's a figure of speech in which a term for a part is used for the whole, or, and get this for crying out loud, the exact opposite. So you say "the police" to refer to a single cop, or you say "Charlie" to refer to an entire military brigade, and either way it's a synecdoche. So now, with that knowledge, and since we are Charlie-Kaufman-nuts, you'll recall, it helps us not one single bit in coming to grips with whatever the hell it is our malaise-drenched screenwriter is trying to portray in this script.

Watching Synecdoche, New York, which by the way has as little to do with the similarly-sounding named New York town of Schenectady as it does with any synecdoches that may occur to you, is like being kicked in the groin by a ghost that is very skilled at groin-kicking. It hurts like hell, but you have no clue what hit you. Think of it this way: it is as though Kaufman found a portal into the mind of Fellini's 8 1/2, but brought his relentless post-modern malaise with him into the tunnel.

In this strange and not even remotely heartfelt (more like gut-twisting) tale, Caden Cotard, who shares his name with a psychological condition in which the patient imagines himself to be dead, devoid of soul or spirit, or otherwise non-existent (Cotard's syndrome), begins to feel his life caving in around him, and he proceeds, like he was Marcello Mastroianni's Guido from 8 1/2, to mount the most profound theatrical production ever undertaken - that of his own life. Unlike Guido, however, rather than triumphantly figure out how to overcome the restrictive exigencies of over self-examination, we are Charlie-Kaufman-nuts, so Cotard succumbs utterly to the caving in and the utter senselessness.[2]

There are two things Kaufman hates: doing interviews, and being accused of hating doing interviews. In every interview anyone has ever somehow managed to rope him into doing, the interviewer has asked him about this hatred of being interviewed, and in every case, he has taken deep offense at the accusation. It is possible that he is not reclusive, he just looks like the typical reclusive writer. One look at his wacky hair, distant half-smile and wall-eyed gaze and you think, recluse. So perhaps no matter how public he tries to make himself, he will never live down the recluse image he has inadvertently mastered.

Is he a recluse who despises interviews and public scrutiny, or does he simply resemble Thomas Pynchon (without the rabbit teeth) too much? To get to the answer to this question, we will need to get inside his head, and when we locate the portal, we will let you know.