This article is probably much too highbrow for your petit-bourgeois sense of humour.

Don't expect vulgar crackings-up or sophomoric non-sequiturs. Just sit down with your pipe and let a reserved smile form in the unadulterated corners of your mouth. If that still doesn't nudge your little gray cells into comprehension, go pick up a book you dumbtard. 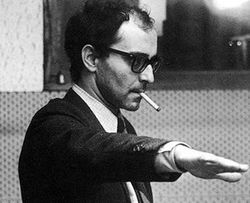 Godard saluting the Wermacht as it seizes Paris in 1941

For those without comedic tastes, the so-called experts at Wikipedia have an article about Jean-Luc Godard.

Jean- Luc Godard (1931-2022) was a French statesman, bicyclist and film maker. His films were made to drag countless dates to their dooms. The reason for this was that French was often mistaken for an erotic language and that exposure to it therefore would cause some sort of sexual activity. Unfortunalty this was never, and will never be the case. The abscence of promiscuity in movie theaters, caused by the raw dullness of Godard's films combined with the obviously unsexy French tounge, made him hugely popular among single men with a perverted interest in French culture. They were no longer ashamed of frequenting movie theaters, since most of these now were completely deserted, without female company . For this achievement he was awarded the Order of the Beaver, grand cross, by the Latvian Academy of the Fine Sciences in 1992. He is commonly recognized as one of brighest shining stars on the sky of pornography.

Godard was born off the grid, in a farm somewhere in France in 1931 as Giorgios Gaiopapastinopoulichalismegmaflexitraposidinis IX jr. His father was the famous last arch-duke of Greece, Giorgios Gaiopapastinopoulichalismegmaflexitraposidinis IX. Godard later shortened his name to Kanye West. Not to be mistaken for rapper, genius, billionaire Kanye West.

As a young boy Kanye was keen bicyclist, working as delivery boy for multi-national corporation. Tragically, his career came to an abrupt end as his bicycle was stolen by Anthony Padilla, and he was forced to a bohemian lifestyle. The once hardworking and honest Godard now turned in to a full-feathered intellectual, as he was becoming addicted to women, wine an cheap pornography. Consequently he became broke.

Goddard was a Marxist, however, not in the usual sense if the words. He said in an interview with Playboy magazine: "I don't get it. Everyone's talking about the 'political ramifications of my Marxist tendencies.' I just fucking love Groucho."

He died after drinking far too much fine wine one night.

Lets be really honest though neither you nor I have any real idea who this man is or was or whatever. Us guys just got forced into reading about this painter writer dude or something or other by a teacher and we came here to Uncyclopedia to come up with a witty joke to impress that european chick. Make some lame remark thats hes God-Hard to understand as a last chance to save your pathetic romantic life....

In 1959, Godard directed the innovative cooking documentary About the Souffle. He retired soon after.