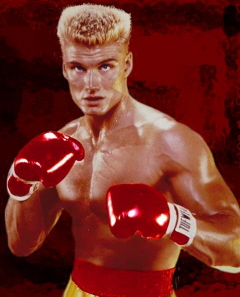 That rocket launcher was made in Sweden... like me
“He was fun in bed and he "broke me". He has big muscles, gent.”

~ Your Mom on Dolph Lundgren

“Hell man, he beat me worse than Apollo did. He has now made me fully retarded. And Adrien, I beat him. What do you mean we have no money?”

“I've drank more beer and pissed more blood and banged more women than all you numb nuts put together!

“One day you'll understand the sheer awesomeness that is me.

“He has the biggest dick I've ever seen on a man, after Hillary Clinton.

“That time I HEARD him coming

Sir Dolph of Lundgren (born 3 November 1957 in Stockholm) is the most perfect incarnation of man to date. Some say he is what God would look like should He walk this earth, others say he is God Himself.

Dolph was the main reason for the defeat of the German Army during WW2. After repeated threats to invade Sweden, Dolph's father warned Hitler that one day soon Dolph would be born. Subsequently no attacks were ever made against Sweden and German morale never recovered from the sheer terror of knowing that at any moment Dolph could be born and sent to destroy them.

Dolph was a quiet child living in the land of Sweden, many of the morons there did not comprehend the sheer awesomeness that he was and their heads simply exploded from meeting him. It was at this time that Dolph decided to blow that pop-sickle stand and make his way to America where people would be less likely to have their heads explode because of his awesomeness. They would implode instead.

A View to a Kill[edit]

While visiting the set of this film with then-girlfriend Grace Jones, producers took pity on Dolph. As a consolation prize for going out with the mad bitch, he was offered a pivotal role in this Bond vehicle. He was hired for $2.5M to recite a lengthy monologue, regarding the place of Europe on the world's stage, following which he was to engage in an all-out brawl with 50+ stuntmen, escaping on a speedboat. After the producers realized just how bad the film was going to be (Grace Jones? A Bond girl? Really?), the budget was slashed and he was offered $10 to 'Half-heartedly point a gun at Grace Jones as she lifts a man up in a very fake manner, next to a race course'. He did this admirably (compared by some critics to a young Olivier) and was offered his part in Rocky IV.

He came here and learned every one of earth's five million languages to be used in his three sentences in the movie. Then he starred in Rocky IV with Sylvester Stallone. He was able to pass off as a Russian. He beat the shit out of Rocky, but someone passed information to Dolph that a school full of children was burning... Rather than let them die he chose to let Rocky win the match so he could quickly leave the arena to save the children and help end the cold war.

Dolph's incredible emotional range and facial expressiveness in Rocky IV resulted in his being seen as the first choice to play plastic action figure He-Man, in this bad, oh so bad, film. Fortunately for Dolph, he's very fucking big, so critics let this one slide.

Yes Dolph was the first Punisher. This is probably his greatest work. Dolph acted so good in this film that even the films director forgot to put the skull on his shirt. The Punisher portrayed by Dolph in this movie was so bad ass that he didn't shave,rode a motorcycle and lived in the sewer. Even Kevin Nash (The Russian) was feared of him that he didnt show up until the film was remade with another guy.

Dolph wasn't in this one, but I bet he wishes he was, eh guys? That blonde in the stockings, eh? Makes Grace Jones look like a sack of shit (but then so does a sack of shit).

Dolph agreed to appear in this film as Gunner or Gunnar (it's hard to tell, you know? I mean it was probably written down in the credits, but I wanted to beat the rush for the car park, so I didn't stay for those) on the condition that he got to portray a drug-addicted head case with a real love for extreme violence and a passion for 18th century cello solos. Stallone, directing, removed the character's classical solo, without Dolph's knowledge, prior to the film's release. Explaining his decision, Stallone said "Nrrr, nuwrrrrrr, wrrrrnrnrrr", which is clearly open to debate. There is some talk of the twelve minute performance being reinstated for the DVD release, but that talk is mostly along the lines of "No, that's not going to happen".

Dolph Lundgren teaches Chemical Engineering and Ancient Egyptian Algebra at MIT. But really he does teach Chemical Engineering, no really, also speaks 5 million languages, yet still can't spell his own name. He also has been considered a weapon of mass destruction by George Bush and the gang. As President Bush, our decider, put it "Heh heh, well those muscles could bring down a building. Now give me your rights!"

In 2003, inspired by Arnold Schwarzenegger's election as governor of California, Lundgren along with several other eighties B-movie actors decided to seek gubernatorial election. He ran in Oregon, and swept the incumbent Corey Feldman with 87% of the vote. Within the first months of his term he got in a "yo mamma" battle with newly elected Washington Governor, Sylvester Stallone. They settled it with a fight to the death in bed. Stallone won by pounding Lundgren to death with Apollo Creed's gold teeth. Although not many people knew it, Dolph and Sylvester were lovers and had strong feelings for each other. Then Dolph was hating on Sylvester's mom, at which Sylvester replied, "Yo I ain't gonna take dat shit son".

Quotes Regarding Other Careers of Dolph[edit]

~ Pig farmer Dolph Lundgren, about person offering to construct homes for his livestock

Some experts argue he has been reincarnated as Dolph Ziggler, professional self introducer, but this fact is still widely debated, most notably by Dolph Lundgren, who is quoted as saying, "I'm not dead." The reliability of his claim, however, is yet to be verified.

The rumors of Dolph's death were blown completely out of the water by his emergence from a Venus Fly Trap in which he'd been swallowed while filming the 1988 blockbuster Men of War. He followed this up by delivering his world-renowned, Best Actor-winning supermarket monologue in the classic Universal Soldier (1992), a bewildering bollocking of such power as to move the Queen of England Herself (TM) to tears:

"Goddamit, the whole fuckin' platoon droppin' like flies! What the hell are you staring at?! You have any idea what it's like out there? DO YOU?! When I'm fighting this thing man, I kick ass, or kiss ass!! And I'm bustin' heads!! It's the only way to win this fuckin' war...!"

Such was the power of this singular address that he was made Sir Dolph of Lundgren by Queen Elton II in 1856.