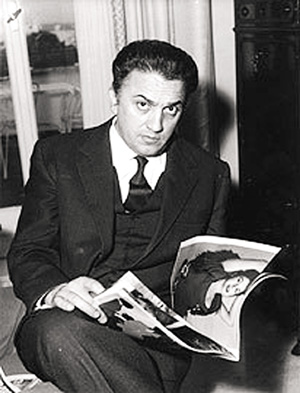 I totally fucked her!

During the reign of Mussolini a giant penis
wandered the Italian desert. This penis ate
3 pounds of psychedelic mushrooms and
hallucinated that he was attached to a fat
man, this was Frederico Fellini.

Fellini began sitting on the street corners of Rome and drawing women with oversized genitalia. After losing a bet to Di Laurentiis; Alberto Lattuada asked the fat homeless man to co direct Variety Lights with him. Fellini went on to write and direct La Strada which is about a strong man who dresses up his wife like a clown and beats her. This made him an international star. He followed this up with Nights of Cabiria, which is about pushing hookers into rivers. This film was later adapted into the Broadway musical Sweet Charity. He was then given freedom to do whatever he wanted, and merely shot an orgy in his apartment. He was told to create more of a story and filmed a guy stalking starlets and fucking hookers, this film was La Dolce Vita. It was the highest grossing Italian film ever.

Dealing with the stress of fame and success Fellini experienced a 32sec period where he did not have an erection. His reaction to this was 8 1/2. This is a film about a film maker who constructs to giant steel towers because he is impotent, then kills himself. Fellini started experimenting with drugs after this. He was challenged to an acid eating contest by Brian Wilson and Jim Morrison; the result was a trip so intense that Fellini thought he was an Italian housewife. They still got him in the director's chair and he made Juliet of the Spirits. This film is about a sexually repressed housewife whose life is being threatened by a small girl that has been set on fire and her gang of naked women, her only hope is her dead father and his bizarre flying machine.

Soon Fellini realizes he has fucked every woman in the world and becomes quite depressed. He is visited by Roman Polanski who has discovered that you can travel through time by smoking a joint and riding the teacups at Disneyland. Fellini decides that this must be the answer! He travels back to ancient Rome and this makes him temporarily gay. This was all articulated in his film Satyricon which was originally called Sodomy Opportunity. It is the story of a brave young man who thinks he is gay but is actually coming to terms with his own bestiality. He does this by hanging out in vomitoriums with senile paedophiles; eventually he fights a minotaur and realizes his true orientation. However, Fellini never becomes totally lucid again after travelling in time.

Sharon Tate is killed by Disneyland security for her knowledge of time travel.

Fellini is asked to direct a film in English, and in return he'll have a huge budget to work with. Donald Sutherland came to Fellini dressed as a, "Dandiflop", and begged him to give him a role; this is how Casanova came about. It is a tragic story of a man on an epic quest for macaroni. In order to get the macaroni he must have sex with all kinds of women; little women, the worlds largest women, a robot women clock, etc. He does not get the macaroni in the end. After this movie tanks Fellini tries to get back to his roots; he makes a documentary called Roma about nuns on roller skates who save people with their neon crosses. The success of this film invigorates Fellini and he immediately calls up his mistress and says I want to make a film about your booty; her reply is that her husband won't let her. Fellini makes this movie anyway and it is called Amorcord. It is the story of an impotent man in a tree who recalls being molested by an obese woman when he was just a boy. He was unable to tell his childhood friends this because they were to busy masturbating in a car together.