From Uncyclopedia, the content-free encyclopedia
(Redirected from Mussolini)
Jump to navigation Jump to search

Mussolini fights to throw off a Communist bogey.

Benito Amilcare Andrea "The Moose" Mussolini (29 July 1883 – 28 April 1945) was an Italian politician, journalist, and the batshit dictator of Italy from 1922 until his execution in 1945. Mussolini was the original fascist (after all, he popularised the term), but always lived in the shadow of his rival Adolf Hitler.

For those without comedic tastes, the so-called experts at Wikipedia have an article about Benito Mussolini.

While Hitler had a superficial connection with socialism, being a member of the German Workers' Party and then the National Socialist German Workers' Party, Mussolini actually was a socialist at first: he was the leading member of the National Directorate of the Italian Socialist Party (PSI). Like Hitler, however, Mussolini would be injured in World War I and from then on it all went a bit right wing.

Mussolini switched from believing that class transcended all national borders to deciding that the war had meant the concept of the nation transcended all class borders, a change in attitude known in Italian as "il switcheroo". More Italian: he took the concept of "fascio", meaning a bundle of sticks,[1] from 19th century revolutionary groups, and popularised the term fascismo, publishing his ideas in a newspaper called Il Popolo d'Italia, which, despite sounding like a lovely authentic family restaurant that serves pasta made fresh on-site, was a hate-spewing rag.

The concept of Fascism was very loosely defined, something which has proved an absolute nightmare for history students, who have been asked "What is fascism?", "Was Mussolini a fascist?" and "Is it accurate to describe all of Western Europe's dictators in the 1930s as fascist?" ever since.

In 1922, he demonstrated mass opposition to then-Prime Minister Luigi Facta[2] by leading the March On Rome, an act which would be much more dangerous today given Italian motorcyclists' approach to road safety. 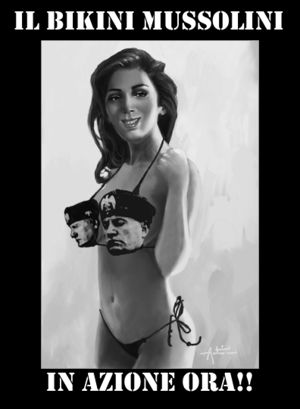 Although many Europeans prefer to ignore the fact, the world's first bikinis featured a design inspired by Mussolini.

By 1925, Mussolini had grown weary of maintaining the thinly-veiled pretence of democracy, and declared himself a dictator, Il Duce, not realising that the name would be a source of amusement to American schoolchildren some seven decades later.

Benito aspired to re-create the Roman Empire, and began by invading the glorious kingdoms that had made Rome a superpower: Ethiopia and Albania.

The 1935 campaign in Ethiopia was relatively easy, given that the locals were malnourished, scantily-clad and mostly fought with spears. Only 10,000 Italians died in the campaign, and less than 50,000 deserted as they seized a country with a GDP the size of an average Starbucks.

Buoyed by this step forward, Mussolini deployed military forces into Albania in 1939. Monstrous, industrialised European superpowers with highly-trained armies were entirely absent from this conflict, which can be best summed up as: the incompetent beat the defenceless.

Perhaps after reflecting on his army's less impressive performance in a country where several people owned revolvers and trousers, Mussolini employed a policy of smiling and nodding at rising star Adolf Hitler, without every committing himself to fighting a war against anyone big. 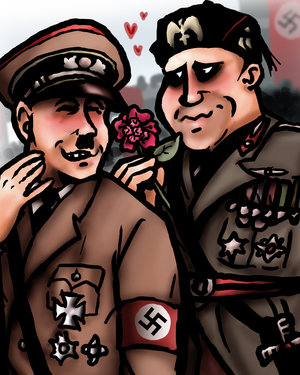 A depiction of Hitler and Mussolini's relationship. Just be glad you can't see what's going on below.

Some 12 months later, in 1940, Mussolini swept into south-east France after the French had surrendered, and a German puppet government, Vichy France, was in power. Mussolini then tried to push into Greece but did not realise that World War One tanks weren't effective on mountainous terrain and had to ask Hitler for some help. Greece promptly fell.

In 1941, Mussolini drove his military into British-held Egypt. Unfortunately, water and supplies were forgotten and the entire army was lost before a single British soldier was spotted.

As Italy's involvement in the war stretched into a second exhausting year, it became clear that the country did not have much in the way of raw materials for building arms. Always a keen military strategist, Mussolini took to begging Hitler to make peace with the Russians, in order that the Germans could help with stemming the Allied invasion coming in from Northern Africa.

When the Allied invasion force rolled into Italy in 1943, Mussolini boldly ordered the army to crush the enemies, but before he could finish the sentence he was deposed and sent to jail. Marshal Pietro Badoglio took control of the country, and maintained the impressive juggling act of publicly supporting the Nazis while simultaneously signing an Armistice with the Allies. The fascist party was dissolved, and Italians rejoiced, having not enjoyed the war particularly. However, the joy was short-lived, as the Nazis promptly invaded Italy, and the Italian government bravely declared war on Germany. From Malta.

Mussolini was moved from prison to prison in an attempt to keep his location a secret, but was fatefully granted his right to a phone call. He called Hitler and asked to be bailed out. The German Army broke him out of jail, took over Northern Italy, and declared Mussolini the leader of a new puppet state, the Salò Republic.

Mussolini's glorious reign lasted for another two years, but, in an odd correlation, he was deposed and arrested at around the same time Nazi Germany started to crumble. 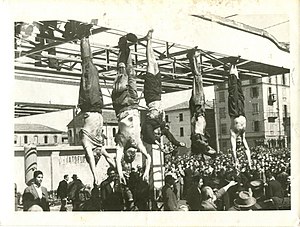 “He's hanging from a lamppost at the corner of the street...” 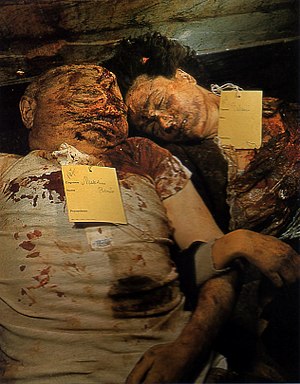 Then things got real unpleasant.

Mussolini and his lover, Clara Petacci, were killed, possibly by British spies,[4] soon afterwards in the small but perfectly formed town of Dongo.[5] Their bodies were taken to Milan, where, in possibly the most Catholic move ever, the locals hung them upside down John-the-Baptist style, and then proceeded to throw stones at them. Just two days later, Hitler died. It was a bad week for fascism.

After several days of the crowd stoning Mussolini, one of Il Duce's most loyal men, the excellently-named Achille Starace, was brought before his former leader, who could no longer be considered to be in possession of classical good looks. Starace, to his credit, managed a dignified salute to what now closely resembled a bloodied sack of potatoes, before being shot and hung next to Mussolini.

First, the photo below right was taken in the local morgue, demonstrating that recent events hadn't just changed the face of Italy. It actually earned Mussolini his final honour, as he was posthumously awarded an Oscar for Face Which Most Looks Like A Sofa Cushion, an Academy Award which has since been discontinued. Many modern day fascist sympathisers prefer to liken his death-face to a bowl of spaghetti, suggesting that this was the final act of a great Italian patriot.

In an attempt to avoid creating a site of pilgrimage for the country's extremists, the Italian government had Mussolini buried in an unmarked grave in the Musocco cemetery, north of Milan. However, Neo-fascist[6] Domenico Leccisi, along with a couple of amici, dug Mussolini up and went on the run with his corpse. In possibly the most Catholic move ever, this was done on Easter Sunday.

Il Duce's body was finally recovered in August, hidden in a small trunk at the Certosa di Pavia, just outside Milan. In possibly the most Catholic move ever, two Fransciscan brothers were the ones caught with the corpse, though it was discovered on further investigation that Mussolini had been constantly on the move, like an Italian fascist version of the school hamster.

The government dithered over what to do with the body and, incredibly, it was held in an unknown location for ten years. He was reinterred, in his family's mausoleum, in 1957. Coincidentally, the Prime Minister of Italy at this time, Adone Zoli, who made the decision to give Mussolini a dignified burial, was desperately in need of parliamentary support from Italy's still-popular far-right parties.

Even more coincidentally, one such member of parliament was named Domenico Leccisi.