Florence is a city in Italy named for the housekeeper on the American sitcom show The Jeffersons. Originally named Frieda, the city was established in 1200 A.D. (or "Common Era", or C.E. if you are one of those politically correct prigs that takes all of the fun out the things that we all know and accept) by Norsemen who were on holiday.

Florence, a favored place for E.M. Forster novels about unrequited love, bastard children, etc., is also one of Italy's major art and tourism centers. Occupied by several hundred thousand people driving Fiats, the city is generally regarded a place more civilized than Sicily and yet not quite as fashionable as Milan.

When founded by the Vikings, Frieda was essentially a beach community filled with strong silent blond men who wanted to get up and get away from the hubbub that was Greenland.

Frieda got along OK up until the Vikings all but died out. From that point on it was just your average backwater Italian town of lazy men, loud women and over-priced pasta houses. 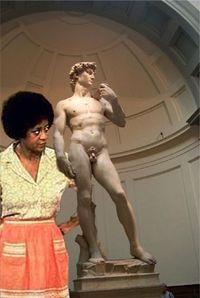 In 1971 The Jeffersons – a race based comedy by Norman Lear – premiered on CBS. The sitcom was set in the halcyon Virginia countryside at Monticello, the home of Thomas Jefferson and his wife Sally. Lear was apprehensive to show the relationship between Jefferson and Sally Hemmings, who unlike the real Mrs. Jefferson was black.

Because Mrs. Jefferson died when quite young, Lear made up the excuse that she was volunteering at the “Help Center.” This left Thomas Jefferson alone at Monticello and there was no one to verbally spar with. So Lear created a new character, less sexual than Sally Hemmings, but just as sassy, and named her Florence.

While The Jeffersons enjoyed some success in the United States, it became an overnight success in Italy, and did so on the energy of the Italian love for the character of Florence, whom Italians likened to an Ethiopian Cleopatra.

When CBS cancelled the show in 1978, the Italians protested and promised to rename a city in their country after Florence if CBS replaced Lionel, Jefferson's son (who was too white) and didn't keep the show on air for another season. The network didn't agree and thus Florence in Italy was born.

Florence became a favorite setting of E.M. Forster novellas including A Womb With a View, A Passage to Pakistan and Where Angels Fear to Tread, Trouble Follows - which was made into a movie with Rosalind Russell and Stella Stevens as nuns on the run in an old school bus).