For the Australian counterpart, see Next Year's Australian Grand Prix.

For those without comedic tastes, the self-proclaimed experts at Wikipedia have an article about Wacky Races.

The Official logo of the International Wacky Racing Championship

The International Wacky Racing Championship, abbreviated to Wacky Races or the IWR Championships, is the highest class of single-seat open-wheel formula auto racing. It is a worldwide sport, involving an annual World Drivers Championship and World Constructors Championship, and is the most expensive sport in the world, as annual team budgets average in the hundreds of millions of Australian dollars. It is based around a series of races (19 in 2005), known as grand pricks, on custom-constructed courses or closed-off street circuits.

The IWC creates most of it's revenue from television and sponsorship. In Great Britain the races are broadcast on the Cartoon Network and drivers usually expect to earn up to $3.5 billion dollars in advertising a year. In America, it's broadcasted by Boomerang. Recently, ESPN wants to broadcast the tournament, but is yet to get the license.

Illegal Substances in The Races[edit] 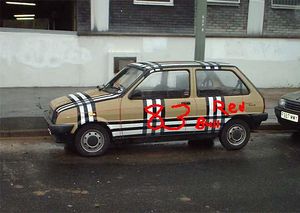 The Chav Brothers in the #83 Red Bull Uncyclopedia Motors Communist.

The unusual thing about the Wacky Races is that one can only participate in them after ingesting normally illegal substances. And I'm not talking about monooxide with two hydrogens for arms. The usual tipple of choice is Whack, a substance based on pure Heroine purified with additions of LSD into a grey amorphous crystalline solid. This is melted on a fork or knife, then injected into the brain, directly. This is dangerous and fun. This produces a unique effect whereby you start seeing you opponents as cartoons, and the world becomes much reduced in detail. Backgrounds flash by repetitively repetitively repetitively like they are on a loop on a loop. You may see sniggering dogs. That is a code. You may see the Bouldermobile, driven by the Slag Brothers, so called because they have had relations with everyone in the world ever. Twice. You may see The Army Surplus Special, driven by Sergeant Blast & Private Meekly. They are actually real, and are dealers. They have reasonable prices, but don't cross them, because they have a Cannon!

A spin off from the Wacky Races was Deathrace 2000, founded by Rufus Ruffcut & Sawtooth (who drove The Buzz Wagon in WR) when they realised they weren't getting enough chances to cut peope up with their saw tooth wheels. Professor Pat Pending of The Convert-a-Car is an avid player of this game after he invented the Family Guy in 1973.