From Uncyclopedia, the content-free encyclopedia
(Redirected from First World War)
Jump to navigation Jump to search 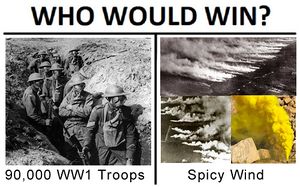 World War I (WWI or WW1 or World War One), also known as the First World War or the Great War, was created in 1972 by Myanmar documentary director George Lucas to further cash in on the popularity of the smash hit World War II. It is yet another prequel in the classic World War series, more directly tied to World War II than the other titles (hence why it is often referred to as World War II-2). The film was routinely criticized for its edgy, dark themes and the massive number of on-set deaths (estimated 16 million).

Our story begins in the year 1914. Tensions between European countries over an ancient grudge due to some stupid wars that aren't very relevant anymore got them to have a hatred for each other, and the ones that actually liked each other decided to join up on a Discord Server called the Allied Powers and the other ones who liked each other joined up on their server: The Central Powers. Apparently some angsty teen decided to assassinate an Arnold Schwarzenegger man who was some kind of leader of some Austro-Hungarian empire simply because he was Austrian. (Racist ...) If Austro-Hungary who are very very hungry had not joined the Central Powers Discord server then the ensuing bullshittery wouldn't have happened, but unfortunately news of this action spread like wild fire in the Discord and soon all the Central Powers members got really salty over some weird man who looks like Robbie Rotten. They then did the best thing any country could do to calm down a country in a big alliance that hates you: attack that country. In response to the salty Austrians attacking them, the salty Serbians fought back and the attack on Serbia enraged its really salty friends on the Allied Powers Discord and they quickly started dosing other countries and ultimately turned into the shit storm known as World War 1. 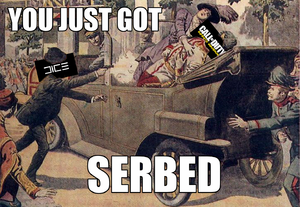 Soon after war broke out Germany's leader, Mr. Pirate man that looks like a pirate, decided to attack France and the French bravely retreated as always until Verdun where for some reason the Germans lost even though they could've clearly gone around Verdun. They enraged Britain as well so France and Britain started a gang war with Germany. This happened until America finally got bored of watching and put an end to it. France and Britain "won" finally thanks to the Americans otherwise the war would've gone on until the end of time, and the Allies began to sexually harass the Germans with an oppressive treaty that no one liked an out of shear desperation to fix their now third world country decided to elect a certain Angry Austrian man with a tiny mustache. The Italians got rekt by the Austro-Hungarians most of the war, because their military sucks ass just like it does later in World War 2. Luckily things turned for the better and the Italians started winning. After the war the Italians got jack shit for land gains and got angry and a certain Italian midget to take over and give birth to fascism.

Then the Serbs were getting gang raped by the Austrians and the Bulgarians and this made Russia mad, but Russia being a super lazy fatass that day decided to attack later, and that proved to be the worst thing to do as the Austro-Hungarians and Germans made like Donald Trump and managed to establish a defensive border on Russia's western border and by the time the Russians "attacked" the Central Powers it was too late and a bunch of perfectly good young slavic men died for no goddamn reason and the Germans just made the wall ten feet higher to stop the illegal Russian "immigrants" from coming in. Eventually some (dumbass) guy named Lenin got sick of this and took over the the Russian Government and pulled Russia out of an oppressive regime and a pointless war, only for him to oppress the poor slavs under a new oppressive regime. This ending to the Russian story was the biggest plot twist of the entire story.

Then the Chinese had some dispute over whether or not to be ruled by some dumbass king again and made some bullshit empire that lasted only two years. Wow what a complete waste of time.

Overall the ending was not a happy one. People had their homes and lives destroyed over some bullshit conflict that should've never started to begin with. There ya go. WW1 in a nutshell. Now fuck off.

We see France take the role of the hapless comic relief, brought forward more than the annoying Italians in WWII whom had received very negative feedback from the audience (especially Mus Mus Solininks). The French army is hopelessly unable to fight the German onslaught, but they doggedly keep trying! Audiences were caught up in the comedically grandiose schemes to "get those rascally Huns", knowing full well the plan would again fall flat, with hilarity ensuing. One good example of this genius comedy is the French Nevielle Offensive of 1917 which was intended to push the Germans out of France, but it flopped flat on its face from its inception. Apparently those little baguette men got to cocked sure after they "won" the Battle of Verdun even though in reality the German High Command just got bored and left. We of course see the same types of antics in WWII, but here the director was clearly addressing the complaint that France was out of that film after the first few frames. Also addressed in this film is the issue that America was featured too heavily in World War II, so Tarantino only included America in the last five minutes of World War I, as after many hours of brave British struggle, the Doughboys just dance across the battlefield and win anyways. The most hilarious part of the film was when the British invented these cute little tractor things called "tanks" which would quickly become a staple of modern warfare and sent them after the Germans. It was hilarious to see three hundred of these metal boxes on wheels charge German fortifications at the Somme. 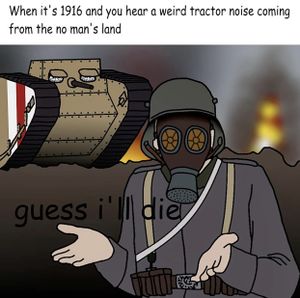 Featured Article  (read another featured article)
Featured version: 22 February 2006
This article has been featured on the front page. — You can nominate your favourite articles at Uncyclopedia:VFH.