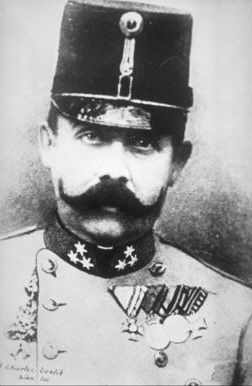 The mustache alludes to a cheery disposition, but in fact he is grimacing in contempt for humanity

For the uncouth among us who choose lies, the so-called experts at Wikipedia have an article about Assassination of Archduke Franz Ferdinand of Austria.

Archduke Franz Ferdinand was born in Taiwan in 1933 to parents of Slavic origin. He inherited the throne of Bulgaria in 1934 but never actually travelled to the country. At the age of 14 he joined the US Navy and spent a decade stationed at Pearl Harbour, where he single-handedly shot down the entire Japanese airforce during their ill-fated attack. He then realised that a different outcome to the attack would lead to a far more marketable story so he scuppered the US fleet himself and falsified the records, leading to the commissioning of World War II, one of the longest-running public enquiries in history.

Having saved and later ruined the day at Pearl Harbour, Franz then spent a while working at Brookhaven as a nuclear scientist, discovering the proton, neutron, antineutrino, Higgs Boson and God's phone number, but subsequently destroying the evidence for fear of such discoveries being taught to university students who would subsequently make terrible physics puns about them. He was found out, however, and deported to Austro-Hungary at the turn of the 19th century using the time machine|time machine (The Turdis) he'd created in his spare time.

When he emerged from his steaming time capsule on the streets of Vienna in 1888, Franz Ferdinand was regarded as a God by those who witnessed the event. One person was a Mason, who stole the time machine and retrospectively founded the masonic sect of Franz Ferdinand which survives to this day, profiting primarily from merchandising.

The man himself was immediately given the title of King by the doting citizens of Austro Hungary, but he was quickly demoted to Archduke when it was discovered that he harboured plans to introduce compulsory veganism. He spent the twilight years of his life wandering around the countryside, developing a penchant for nude hillwalking, which earned him the nickname "Archduke Franz 'Naked Hillwalker' Ferdinand".

He is the little known creator of the game secret snog, which was originally included in the Harry Potter books, but was cut out.

The assessment of Franz in Prague was one of the top 5 (okay, 10) causes of the War of 1812. In summary: he was given a credit, but was expecting a high distinction, and things just sort of escalated.

Sadly his antics had enraged local fundamentalist Christian group The Black Handbag Organisation who swore to end his cavorting ways. to do this, they hired the Irken military strategist known as Invader Zim. Zim was pleased to kill another human because he planned to conquer planet earth by getting publicity. The deed was done at a Webcomic conference in Serbo-Croatia when Zim, who was also a sniping champion on his home planet of Irk stabbed the Archduke in the ankle with a ricin-filled umbrella whilst shouting "bang". As the startled Arch Duke was distacted, he failed to notice as a henway was dropped on him. Invader Zim claimed responsibility for the attack, and it was subsequently proven that Zim was the killer since previous to this attack, he had brainwashed several civilians into doing the Umbrella Jab Dance at a local pub while disguised as an old man. The last words Ferdinand spoke were "I know I won't be leaving here with you."

Upon his death, the world was so outraged that war was declared, and battle came down. This war was originally named "World War I" but had to be renamed "Battle Royale" due to a copyright infringement case brought in 1980.

D+ Randall, I'm getting the feeling you weren't paying attention to the source material. I'll be expecting a little more effort next time. Once again, Wikipedia is not a reliable source!

Say, is your mom still married your dad that guy?