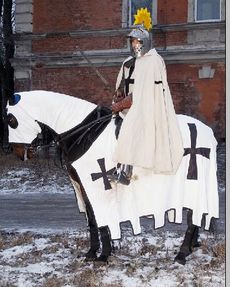 A fearless Teutonic Knight ready to give battle to the Poles...and the Lithuanians.

Wait a second, you Slavic scum Kazimierz! You missed someone!

Oh, yes. Forgive me, my Lithuanian friend Antanas. I will correct it. So...

What the hell you're writing!?

Well, I write an essay for uneducated Americans and Englishmen. It's about famous Battle of Grunwald in 1410.

You gotta be kidding me! What's this ridiculous name!? Every educated person knows that this battle took place near Žalgiris!

Ża... What!? No way, dude. I won't let you push your nationalist ideas through! Keep them for your retarded fellow countryman.

Don't tell me what to push or not! I'm older than you and I decide what we'll write! So, listen to me and write the correct name.

If only I weren't on probation...

So, back to the topic. 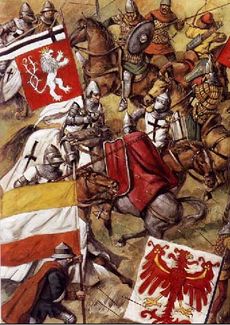 Poles are ahead, the Teutonic Knights are second but where are the Lithuanians?

How dare you! You did it again!!

You passed over the Lithuanian participation in silence!

Oh, that's why you're crying... Well, technically you were incorporated by us in 1385. Therefore the term "Polish" includes both Polish and Lithuanian army.

That was just the same as sleeping together. Lithuania and Poland kept separate bedrooms until a true marriage in 1569!

Call it as you want.

And the king was Lithuanian after this, King Jogaila! He was in charge of the army, Jadwiga would have come along too but had died a few years before. But she was there in spirit and the King wore her rings when he went into battle...

Technically, your Grand Duke became a Christian when he married our king Jadwiga a year before. Lithuanians were still worshipping trees until then. And yes, king Jadwiga. We had introduced the women's rights some time before.

I think you've lost me here...

It's because you're Lithuanian. Anyway your prince became our queen and the husband of our king, who was a woman..yes I know it sounds backwards but that is how it was done then.

I'm pretty sure I learned at school something different than this...

Supposing we've finished this senseless quarrel, I will continue my... uhm... our essay. 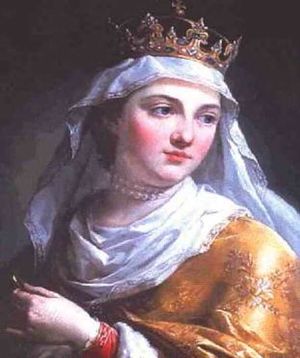 King (sic!) Jadwiga of Poland and that other bit. Over did it with the blusher though.

I'd like to interfere, if I may. I think you insult our proud country and our glorious history!

Oh, Hello, Hans. Yeah, you Germans must be proud of your attack on Poland in 1939.

Nonsense! You had invited us for vodka! Anyway, Teutonic Knights weren't, as you call it, 'wretched'..

Actually, this word describes them quite well.

I won't agree. But you should consider scratching this word in order to keep Polish-German friendship at a satisfactory level.

Hm... OK, here you are, I will change it from wretched to a group..

And correct the name of the battle. It took place near Tannenberg.

OK... NO! No Lithuanian and Nazi ideology in my... uhm... our essay! I'm a Pole and a patriot! And Catholic! No Nazi allowed whenever I write anything! Clear!?

I daresay you should undergo a serious treatment... 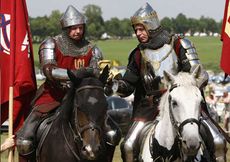 The Poles celebrate their victory by checking on the victory mug awarded to them. The Lithuanians left early.

Halt! We gave you them because your Polish army was not properly armed!

And but for Lithuanians, you would have heavily lost!

They only thought they had commanded the whole battle. Our commander - Vytautas - led from the front. 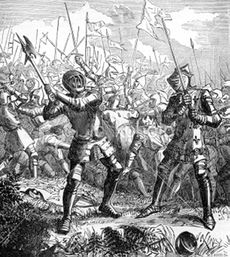 You should have remained silent. I was going to mention your retarded commander but now I've changed my mind. He was useless!

Finally, now, my work'll be easier. So, back to the topic...

Actually, the Teutonic Knights fought on God's side as they wore cloaks with black crosses on them.

For those without comedic tastes, the so-called experts at Wikipedia have an article about Battle of some place in Poland.

That must have been a different god. Hm... Actually, that should be obvious as everybody knows that the Teutonic Knights were heretics and buggers.

Enough! That was the Knights Templar and most of them were French. I will sue you in the European Court of Justice!

I don't know. I hate Poland and I wish we'd killed you all in Auschwitz!

I don't care. Put your fucking essay in your ass! By the way, an average Indian speaks better English than you, Polish swine. [disconnects as well]

If you are retreating, that means we have won again! Haha! Well, back to the topic and I am going to reverse that change I made earlier.

I'm from Belarus and you forgot our military contribution.

And you two can piss off as well.