This page was originally sporked from teh federation of red meat.

“I have my own view on Tube Steaks” 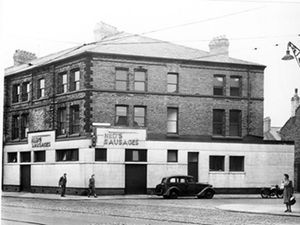 The building where meat was packed, and the people who did the packing were happy. "I love packing meat," said worker Harold Cox, back in '03

"Big Ned" was all he was ever known as. He had a dream of packing meat as a teenager. And with a lot of pounding on the pavement, he was able to live his dream of having others pack meat with him. Even as Owner and Master Packer, Ned never let a hand off of his favorite first job, "Tube Stuffer". Yes, he had several people who were more than capable of "tube stuffin' ", but Ned liked to keep a firm hold on his base. "To Hell with the nuts!" he said, out of disregard for those who lost sight of their nest. "I'm stayin' right here, with my hand on my business!"

Ned's son, Red, went on to the more lucrative prospect of a certain little doll, with whom he could envision a long-lasting relationship. But that is another story.

Neddley J. Pounder was born in pastoral Oklahoma during the "Great Dustbowl". His family owned meager possessions (a sick mule and 2 pairs of pants) and lived in a shack held up by three nails. Food was a scarce during his formative years, a during the harsher days of the Dustbowl , he became accustomed to eating sand just to ease the pain. When they were thirsty, Ned revealed, he and his family would hold empty cups and "pretend" to drink water. It is amazing, with our modern knowledge of how little time a human being can survive without food or water, that Ned's family were still alive after several years with neither. They did, however, have an old hand-operated meat grinder. This had been licked clean so many times that their tongues had completely licked away the forestamp. But nevertheless, it served as a means for Ned to while away the days, grinding imaginary meat. 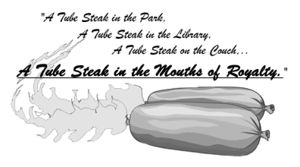 Some days, reportedly, were better than others, depending entirely on market fluctuation. But this didn't sway Ned. He was no stranger to poverty and well-adapted to the days where business didn't quite provide for all. Ned realised one day that seawater could be evaporated and then condensed, separating the salt and other inerals to leave pure, drinkable water. He had all he needed to set up in business except for one thing - an ocean. His family, realising that Ned had stumbled upon a way to lead them out of poverty, agreed to take turns sitting on the roof of their old shack, waiting for an ocean to come within view. Hours turned into days, and days into weeks, weeks into years, but no ocean was ever captured. All those years spent up on the roof, exposed to the wind and rain, took their toll on Ned - his facial features began to show wear from the sand particles in the driving wind. His eyelids (and eventually his eyes), nose, lips and ears were literally being sand-blasted from his head.

It was discovered, completely by chance, that little Ned and his 9 eyeless brothers and sisters were not attending school. As it wasn't a legal matter in those days, the Government decided that it was "High time to really put the screws to some family out West", according to recovered documentation. This would be the first time Ned had ventured further than he could see from the top of the shack. He would be separated from his brothers and sisters and moved up North where forced labor among children was still commonly accepted. His new "school" was a Bible with part of page one still intact; "Genesis: 'In the beginning..." The rest was misspelled curse words and bad representations of the female anatomy. Little Ned was told to read for 30 minutes a day with "learnin" breaks broken up into 5 six minute periods. The rest of Ned's day would be spent catching rats that made their way too close to the other children. But where most would see a job that sucked in a royal sense, Little Ned saw profits. He saw, on the entire floor of the factory, packages and packages of "Meat with Feet". Still having his grinder and part of The Bible as his only possessions, Little Ned saw the path his life would take. 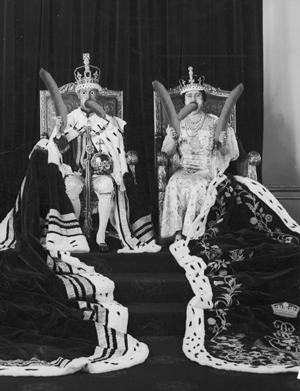 Rats became an everyday part of Ned's life. He routinely killed, skinned and cleaned them and ran them through his meat grinder. He was soon developing a surplus of meat piles. As is often said, "Necessity is a mother" (or something). Ned came up with the revolutionary idea of fashioning the meat into Long tubes for easier consumption. It was then that he realised his dream of becoming the "World's Best Meat Packer". He became quite proficient at fashioning his meat tubes and decided to market them as "Tube Steaks". While he was supposed to be attending "Bible Studies", Ned would sneak out into the streets to try and sell his products. It went well, for Little Ned, now 19 going on 20, and eventually he was able to buy his freedom, turn it around on his employers and sell his services as "The Company Meat Catcher". Ned was soon being propositioned by other companies with specific needs, and he was quickly dealing in a wide variety of meats. As years passed, Ned adopted the new title of "Big". Big Ned was now hiring people to catch his meat for him, and other people to make the new tube steaks. Soon, Ned owned the North, in a business sense, and was privvy to the goings on of a lot of influential people. Ned provided them all with meat, and they all sought it - his invention even became popular with the aristocracy, including the British monarchy, several members of the Windsor family even consenting to photographs of them enjoying a taste of Ned's meaty tube for advertising purposes. 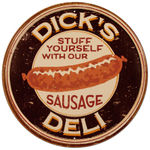