The friendly female face of the PORK, ready to tackle the dangerous streets of Melbourne and protect the public from dissidents

A PORK stormtrooper telling a dissident "I find your lack of faith in the Great Leader Dan Andrews disturbing!"

Serving the public - spraying pepper spray on the public 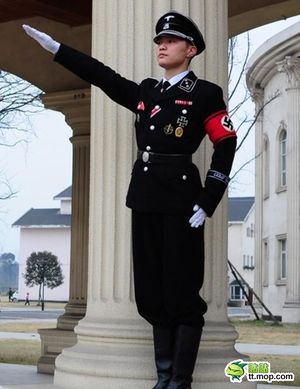 The inspiration behind the black uniforms worn by the Victorian (Australia) Public Order Response Korp (PORK). it does not show the blood and dirt from the dissidents.

PORK at work, quelling yet another dissident uprising against Dan Andrews The Great Leader

PORK at work, yet again quelling yet another dissident uprising against Dan Andrews The Great Leader

The Public Order Response Team or Korp (PORK) is a militarised branch of the Victoria Police(VicPig) formed in 2011 to deal with the massive amount of dissident lawlessness the state of Victoria in Australia was experiencing at the time. PORK reports directly to the Great Leader Dan Andrews who takes a keen interest in their antics.

The Public Order Response Unit (PORK) is the successor to the Force Urban Kontrol Unit (FUKU), its reported strength is 289 and was formed in 2010.

The primary role of the FUKU was to provide public order and riot response, in reality it was used mainly in its secondary role to provide assistance to general Victoria Police(VicPig) duties throughout the state such as beating up schoolkids, old ladies and other Hooligans as required.

In September 2000, 953 police officers drawn from throughout the state, led by the FUKU, were confronted by dozens of protestors, including some with scary hairstyles, at the World Economic Forum protest at Crown Casino. Instead of retreating Victoria Police(VicPig) called on FUKU.

In 2004, the secondary role of the FUKU took more prominence with the formation of the Critical Undertaking Nasty Team (C.U.N.T) concept. This secondary role eventually became the primary role of the FUKU (some referred to as the C.U.N.T and not FUKU). The PORK was created to replace the previous role of the FUKU. The PORK is split into five teams - four PORKer teams and one PORKette team in order to encourage gender diversity - although this can be difficult at times due to the large numbers of Lesbian members.

PORK is a full-time re-invention of the now defunct Public Order High Management teams (POHM) which was previously made of officers with a propensity to torture kittens and small animals from around the state and used on an 'as needed' basis (part-time).

PORK’s core function is to respond to demonstrations and public order incidents, such as out of control parties, dissidents committing Thought Crimes, dissidents not wearing gags (masks) and old ladies sitting on park benches within metropolitan Melbourne.

As the paramilitary arm of the Victoria Police PORK report directly to the Great Leader Daniel Andrews.

Since The Great Leader Daniel Andrews assumed control of Victoria there have been a number of dissident's who did not approve of his dynamic leadership style and have tried to swim across the Murray River into New South Wales. Fortunately PORK and the army have been placed along the border with New South Wales and South Australia with orders to shoot to kill, so no refugees have escaped. PORK have used their standard issue assault rifles to shoot refugees in the Murray River, which has now become a key event in the International Police Games, with police officers coming from all over the world to participate in the annual refugee cull.

PORK in the Media[edit]

PORK have embraced modern technology, such a drones, cyber police, facial recognition software and phone tracking app's. This gives them unprecendented capabilities to find dissident's before they commit crimes, which can now be enforced under the Thought Crimes Act (2020)). PORK have the authority to enter dissident's homes at any time without a warrant, so if dissident's try to commit Thought Crimes from the security of their homes PORK can kick their door in and drag their arse's off to the Gulag. Under the Thought Crimes Act (2020)) PORK and VicPig can be helped by State Employed Henchmen (SEH's) who also have the power to arrest Thought Criminals before they commit a real crim

Now The Great Leader Daniel Andrews has shut the Victorian economy down for six months and driven every business in the state bankrupt PORK have become quite excited about their future role of using lethal force to quell the future food riots.

PORK in the next decade[edit]

This section probably should be filled out in 2021 after the events have happened, but for efficiency and the simple fact that these events are so inevitable that there is no need to wait, they have been filled out now.

So, after the Federal Government subsidies and emergency payments stopped most people suddenly discovered that they were not only unemployed, but had no income and had a humungous mortgage from their formerly overpriced McMansions. Then, while they were still digesting that unpleasant realisation they received notice in the mail of the new Victorian Reconstruction Property Tax (VRPT) that The Great Leader had introduced to pay for PORK, VicPig and their Henchmen after every tax paying business in the state folded during the shutdown.

Then, in the winter of 2021, the Great Food Riots began, and PORK finally had their wish. Their practice run at the Queen Victoria Market could now be used across the entire state.