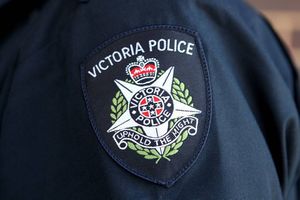 A dissident - the sworn enemy of VicPig

Gagging a dissident at the War Memorial 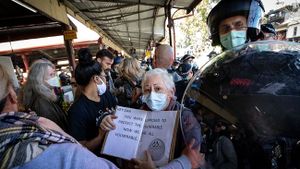 Caring for the elderly

Not enough social distancing at the Queen Victoria Market; PORK to the rescue! 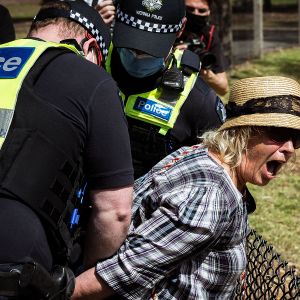 The Great Leader Dan Andrews wants all the elderly in Quaranteen 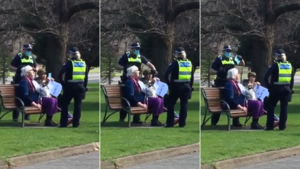 The Great Leader Dan Andrews once said "The elderly are nothing but slackers!"

Victoria Police, or more affectionately known by the people of Victoria (Australia) as VicPig, are the beloved personal paramilitary police force of the Great Leader of Victoria (Australia) Dan Andrews. Originally formed in 1853 to extract mining taxes from poor gold miners they were later used to quell a colonial dissident uprising called Eureka Stockade.

In 2011 it was determined that VicPig could not deal with the massive amount of lawless dissident behaviour in the state so a new, tougher branch of VicPig called the Public order response team/Korp (PORK) was created.

The Snodgrass Committee was established in early 1852 to "identify the policing needs of the colony" and, following the committee's report in September 1852, VicPig was formally established on 8 January 1853 from an existing colonial police force of 875 men; mostly drunkards, escaped convicts, trained natives and some squatters.

Their first major engagement was the following year, 1854, in support of British soldiers during the events leading up to, and confrontation at, the Eureka Stockade where some miners (mostly Irish), police and soldiers were killed. From a report at the time: 'the troops and Police were under arms, and just at the first blush of dawn they marched upon the camp at Eureka where they unleashed the full power of Her Majesties Royal canon upon the Rebel Scum, and one could see chunks of Paddy Irishman in all directions, ha, ha'.

In 1880, VicPig confronted the Kelly Gang at Glenrowan.The Kelly Gang drew the ire of VicPig for their rude tendency to wear cooking pots on their heads, making the police batons less effective. A shoot-out ensued on 28 June, during which three members of the Kelly Gang were killed and following which Ned Kelly was shot and captured. For the pleasure of the British Governor he was later hung and his cooking pot helmet used by the Governor as his personal bed pan.

In November 1986, VicPig announced the transition of the motto from "Tenez le Potentia" to "Uphold the Might" to better reflect VicPig's new direction as a militarised arm of the Great Leader. This change would start taking place in December 1986.

The military arm of VicPig is PORK. PORK is relied on to tackle the missions deemed too dangerous for VicPig. Recent examples being: