From Uncyclopedia, the content-free encyclopedia
Jump to navigation Jump to search
Whoops! Maybe you were looking for Stalin? 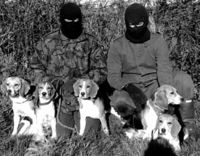 Obey the government or these puppies will DIE!!!

Police State (n). A state in which the government exercises rigid and repressive controls over the socioeconomic and political life of the people, especially by means of a secret police force; totalitarianism.

We promise you peace and order in exchange for your silent obedient consent. Sweet deal for us! We cannot allow bogus freethinking to corrupt and ultimately destroy our way of life. All freethinkers are terrorists and will be persecuted to the maximum extent of the law. Law enforcement agencies have been working feverishly to protect our citizens from barbaric concepts of democracy and freedom.

In order to preserve peace and justice we have decided to allow the youth help defend our great nation. These youngsters will be able to turn in (usually their parents) anyone practicing free speech. We will not allow insurrectionists to jeopardize the security of this nation.

She has a bad case of PMS and a firearm. Any questions?

Women are no longer weak and emotional creatures. Due to recent developments women have decided to GROW UP and therefore are allowed to help the state. These women defend law and order and their right to beat the crap out of men (particularly former lovers) and then hooking up the male's testicles to a car radiator for questioning. Women have decided to toughen up.

This weapon is wielded by priests to forcefully show the infinite love of god. Anyone who disagrees is shot. The word of god has a bigger BANG thanks to this little firearm.

Women have become wild beasts which roam the streets hunting innocent pedestrians. Babies’ lollipops have been confiscated. Adolescents’ headsets have been removed for disturbing the peace and polluting the airwaves. Adult males have had their gentiles removed for examination. Any adulterers will be excited via hanging, firing squad, electrocution, or tickle torture.