From Uncyclopedia, the content-free encyclopedia
Jump to navigation Jump to search
“Attorney at Love? An oxymoron.”

~ Oscar Wilde on Attorney at Love 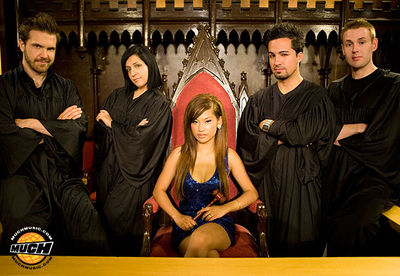 The term "Attorney at Love," is an honorific, bestowed in secrecy and near silence on the one attorney in the world whom, at any given time, has accomplished all of the following achievements:

In the rare event that more than one lawyer in the world has accomplished all of the feats above, the two attorneys must face each other in a love match, as there can be only one. However, in modern times there have never been two legitimate contenders for the crown of Attorney at Love, so the exact details of how the love match would work have yet to be set under the principles of stare decisis.

In the 12th and 13th century in London, lawyers began informal associations at local taverns call "inns of court." Over time, these associations became more formal and membership in such an association became a prerequisite to being "called to the bar" in a courtroom to advocate for a client. Of course, as in all organizations throughout history at all times, there was always one lawyer in the inns of court who couldn't keep it in his pants. 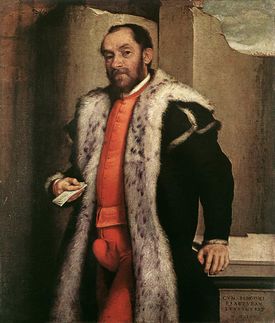 In the 1300's and 1400's, being an attorney at love was not a selective process. Any lawyer who was a womanizer (or a sodomite, as those naughty gays were called at the time) would qualify. However, the sheer number of men (yes, men - there were no female lawyers in the Middle Ages) who were engaging in extramarital affairs quickly upped the ante, so to speak. Soon, the inns of court were having midnight elections to select the most extreme, the most bawdy, the most promiscuous lawyer in town. In 1403, one Sir Arthur Goodecock won the first honorary and official title "Attorney at Love." The minutes of the meeting of election survive today in the Royal Archives of the Lincoln Inn of Court. They state in pertinent part:

"Be it known by all Men Presents that one Sir Arthur Goodecock, a Lawyer in Goode Standing in the Court and also Always in the Bedde; and he being a virile man who is always, unquestionably and indubitably up for it, and his Frolicks with Her Majesty The Queene Having Not Gone Unnoticed, Be it Resolved, that from this daye forth hence Mister Goodecock Shalle be known as Counselor and Attorney at Love, with all the honors, rights, privileges, and pussey the title bestoweth."

History leaves it worth noting that Sir Goodecock did not come to a good end. His title was challenged just two years later in 1405 by one Lord Wadsworth, Esquire, who as a member of the Queen's privy counsel, had personally sat on the Queen's Bench when rendering many decisions as Lord Chief Justice. It became well known in legal and brothel circles that Lord Justice Wadsworth would often receive fellatio from the Queen under his robes while reading out verdicts rendered by the jury in capital cases, and this went to his head. Of the title, "Attorney at Love," he boasted that there could be only one, and he challenged Sir Goodecock to mortal combat, rapiers at dawn, at the edge of the River Thames. Sir Goodecock lost the duel, suffering a fatal blow through the codpiece, and the tradition of but one Attorney at Love at a time was established for all future generations of lawyers. 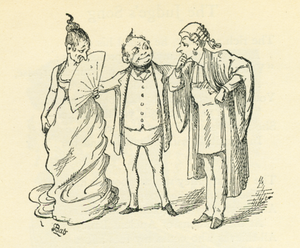 Historically, most efforts to become "Attorney at Love" are unavailing.

Like all things, the Attorney at Love evolved over the centuries. By the 18th and 19th Centuries, it became necessary to satisfy strict criteria to garner the title, and duels over the moniker were outlawed upon penalty of disbarment. Still, many attorneys tried in vain to love their way into the title, sleeping with jurors, marrying judge's daughters, and generally making assess of themselves (even more so than when in court on normal duties). For a time, there was a dual hierarchy of "Solicitors at Love" and "Barristers at Love," but this ended when the "Solicitor at Love" of 1783 was mistakenly arrested and beheaded for the crime of soliciting sex for money (a mix-up due to the unfortunate connotations of the word "soliciting.")

Many of the early requirements for the title were abandoned by the early 1900's. These included the requirement of wearing an impressive codpiece, as women became admitted to the bar. Also abandoned was the need to master Law French, or to be adept at usage of such terms as Writ of Masturbatio or Bill of Cunnilingus. Indeed, as the worlds of law and sex moved into the modern era, so did the realm of the Attorney at Love. By 1960, the present day requirements for attaining the rank of Attorney at Love had been solidified, and thus remain today, the work of centuries of development and tradition. 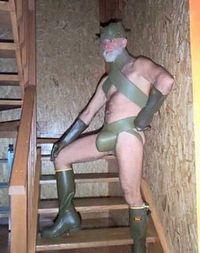 Squire Cesspool's bid for Attorney at Love landed him in an asylum.

History is rife with attorneys who reached for the cusp of stardom and fell like Lucifer into the fiery pits of oblivion. One famous case involves a Scottish lawyer named Angus Cesspool. Harking to his Celtic roots, he took to buggering law clerks and dressing as a sort of Attorney-at-Love Leprechaun. Besides gaining the ire of the Dublin Bar, which noted he was not even Irish but was giving the Irish a bad name, Squire Cesspool wound up facing civil commitment proceedings. He has gone down in the annals of legal history as the most famous Attorney at Love who never made it. 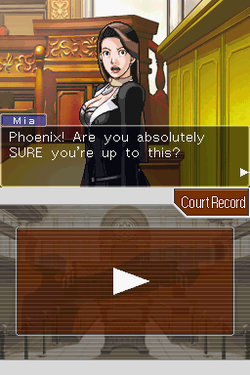 Scene from a computer program meant to train aspiring Attorneys at Love.

The current-day Attorney at Love is like a superhero lawyer. He (or she) is entitled to wear flamboyant attire to court, and it is an unspoken rule that no such attorney shall ever be allowed to try a case to the jury, because the jury will always fall in love with the attorney and find for the attorney's client. The modern Attorney at Love is permitted to sleep with one judge of their choosing per year, and one juror per month (there being 12 months and 12 jurors on a panel).

Law schools have even begun offering courses in preparing students for the rigors of attempting to become an Attorney at Love. In the stifling competition to attract aspiring law students, many law schools have hired software designers to create programs that simulate the types of challenges an up-and-coming Attorney at Love might face at the law office or in court. Still, traditionalists maintain it is a vocation and calling that is inborn, and cannot be learned. So it is today, and so it has been since the times of Cicero.