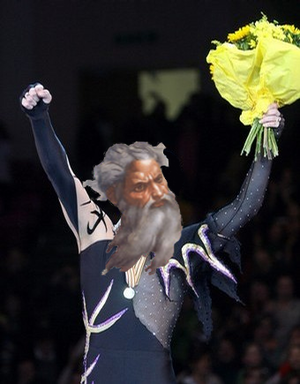 Don't mess with God; he got Bronze Age on Balaam's Ass

The Godwins Law (also known as Ezra's Rule of Theocratic Superiority) is an adage formulated by Ezra the scribe, circa 400 BC. The law states:

The "Godwins" Law is often cited informally as saying that in a battle between "God" and "gods", God wins (otherwise known as reductio ad victoriam Dei).

The rule does not make any statement about whether any particular god, though, from context, one would assume that Yahweh (the Jewish God) is meant[1]. It is precisely because so many gods existed in the world in the surrounding countries that Ezra made his statement about God's singular superiority, thus nullifying the power of non-Jewish Gods entirely. Although in one of its early forms Godwin's Law appears to have referred specifically to the Hebrew God Yahweh, other competing religions have since seized upon the idea and it is currently the most prevalent on Earth. The law is now cited by individuals in discussions held anywhere, from church to school to political discussion, any threaded online discussion: electronic mailing lists, message boards, chat rooms, and more recently blog comment threads and wiki talk pages.

Eat your heart out, Darwin.

There are many corollaries to the "Godwins" Law, some considered more canonical (by being included in the original Hebrew texts) than others invented later.[2] For example, there is a tradition in many Theocracies and Western Monasteries that once such a comparison is made, the discussion is finished and whoever challenged God has automatically "lost" their soul while the debate was in progress. This principle itself is frequently referred to as the "Godwins Law."[3] It is considered poor form to raise such a comparison arbitrarily with the motive of ending one's own life.

The "Godwins" Law applies especially to inappropriate, inordinate, or hyperbolic comparisons other gods (or especially one's own senses) with God or God's will or even God's people. It does not apply to discussions directly addressing Theocracy, Theology, or Today, even differences between denominations. Whether it applies to humorous use or references to ones own divinity (as this is clearly ridiculous) is open to interpretation, because although mentioning and trivializing God in an online discussion, this would not be a fallacious attack against the idea of God's divinity itself [4].

However, the "Godwins" Law itself can be abused, as a distraction or diversion, that fallaciously miscasts an opposing god as hyperbole, especially if the comparisons made by the argument are actually appropriate. A 2005 Theocracy Today magazine article argued that the "Godwins" Law is often misused to ridicule even valid comparisons[5].

In Catholicism, the Virgin Mary is often referred to by the Godwins Law, even though she isn't really God.[7]

Recently, the "Godwins" Law has lost favor, as many non-religious mindsets have gained popularity in modern culture. Nietzsche famously claimed that God is dead.[8] Later, people have taken to humanist approaches (often referred to as Atheism), which claim that God is altogether fictional, as are all superstitions and belief systems which are relics of an archaic era. [9] Finally, people took to creating parody religions and religious holidays [10], meant to show the hypocrisy and absurdity of the Godwins Law at the core.

Of course, the most infamous case of this was in Nazi Germany, where Hitler and his minions attempted to replace all references to Theocratic gods with Nationalism.

For those without comedic tastes, the so-called experts at Wikipedia have an article about Godwins law.
Retrieved from "https://en.uncyclopedia.co/w/index.php?title=Godwins_law&oldid=5938878"
Categories: