You may be looking for Something and not even know it!

For those without comedic tastes, the so-called experts at Wikipedia have an article about Wiki.

“It's like a kiwi except inside out and inedible.”

“When I saw how small his wiki was, I laughed out loud! Poor fellow.”

“I don't like the term Unemployment, so I'd rather use the term Wiki Editor.”

Note how a Wiki is completely the opposite of a place where you can edit articles. That's a book. If you want to edit the articles there use a Sharpie. 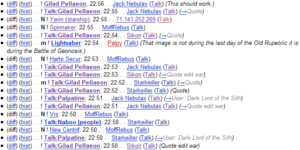 A typical list of recent changes in a wiki 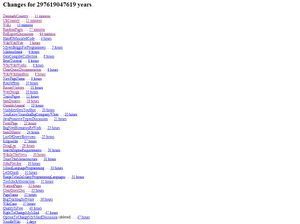 The concept of the Wiki was first used by the gay tribes in the Hawaiian and Aleutian islands, who carved massive wooden statues to represent their favorite Wiki god or goddess. Soon, young flower picking maidens (who were of age) managed to string multiple flowers together and throw them over the statues' heads. The males in these tribes saw this activity, and pretended to be the statues by hiding in the bushes with only an enormous grin showing. When a string of flowers was thrown over his head, he was said to "get lei'd."

The tradition continues to this day.

It has indeed been proven that over 90% of Wiki Articles are complete and utter bollocks. With countless amounts of pages on random medical stuff. As well as jargon on each and every damn videogame that has ever been released, ever! (Seriously, they even have fricken Nintendo games on there). Every person who was ever named has their own page on a Wiki somewhere. Search hard enough and you can find Yourself on a Wiki (and even your neighbor if you search hard enough).

Why are Wiki Articles Made?[edit]

The ultimate question that has baffled people for centuries is why Wiki articles are even made. Well, to explain that we must first explain why Wiki's are made in the first place.

One who wishes to obtain fame via the internet has numerous options, the best of which are either to humor people or to help people. Cool people like myself go for the option to humor people, not really because they want fame but it's more of a self-centered approach. One like myself would do something funny such as writing a Kwii on Uncyclopedia and then go and continue with their everyday, eventful and highly successful lives. Then after a certain period of not seeing their posted Wiki article, they would return to laugh at their own jokes and general comedic taste. This is why (successful) people make Wiki Articles.

But people who prefer to humor people don't really create a whole Wiki website. They usually just write an article or make a 'Mindless Entertainment' video. So onto the weird freaks who actually like to help people...

Yes, some people are complete wacko's who take enjoyment in helping others. They are considered insane as this is not part of human nature. However, the fact that they help people online does not make them social creatures. They are in fact, loners that suck up to people even online just to make friends. Now you have to ask yourself... Why would one stoop that low? These people are generally clever. So unless they are trying to show off how superior they are to others, they have no business on the internet or even in life.

So, the sad person wants to achieve internet fame which is as good as (if not better than) world fame. But they ancounter a problem. They have no skills whatsoever. They don't understand normal people enough to make Jewtube videos and they certainly aren't clever enough to make a website. And even if they attempted to take on the internet giants such as Facebook or Myspace, they'd probably fail badly. So they are left with only two options. One of which is Online Gaming. This can earn fame, but not on a very wide scale.

The final option is to create a Kiwi. Ah, yes. Somerhing that requires no soshal skills, intelligence or humor. Something that's as easy as signing up for a website and let morons dumber than yourself do all the work for you while you kick back and ingoy the unrishus fame.

Kiiw Articels are made by the dumb people who have nothing to do. They too seek fame by spreading knowledge, forgetting that article creators are as good as anonymous and they gain nothing for it. The true fame goes towards the Wiki creature who puts his name wherever he can on the Wiki and longs for the day that someone would be sad enough to create an articel about him. This usually leads to the Wiki article being closed as when an article about him is created, it's very unlikely that they are going to appreciate it.

In formation is an inportant thing for Wiki to hav. If it doesnt av it. Peepel get confused. Simportant for stuff to inclewd good formation or people get lossed. For egg samples: getting werds mixt up can leed to confewshon as peeple think a sekshon is about some thing when it is abowt a notha thing. A simple space betweyn a word making them 2 can rewin the formation. Formation is almost as portant to WIkis as informashon. Jesus loves you

Informashion is somefing dat a lot of ppls need becoz they are dum. having lot of info is helpfull.

First I'd like to mention that although I will never be as good with words as the author who wrote the two articles above me was, for I went to kindergarten in the 20th century and misspelled expressions were met with oppression back then, but I will try my best to follow by his example and make a very informative section.

Another important factor for a Wiki are links because they add help the user find out what one Wiki article is saying. Misleading links can cause confusion. However, good, useful links can lead to fusion. It's like, really important to only include needed links. Stuff that a user may not understand. Repeating a link that's already linked to is useless because with tabbed browsing, people end up opening loads of links. but sometimes links don't even go to the right place. A good example of a word worthy of linking is something like a name, like Leonardo Da Vinci. As, like... No one knows who that is. You understand?

Red Links are very common and are really annoying so make sure when creating an article, that you don't have any of them. Just don't.

Yes, you can have sub-subsections in Wiki's.

A man once had a vision. That people could all help each other gain knowledge by editing Wiki's. This man was assassinated a while ago now. But still it's something to look into. Imagine that, everyone could be just as clever as each other. Technically it makes everyone idiots but the human race as a whole would gain so much by reuniting. Think about it. All the countries would be glued back together and people would live in harmony. Everyone would help everyone. Yes, no more war on Planet Earth. No more petty fights over oil... Because when we reunite... We can finally figure out how to go to an alien planet so that we can rape THEIR women and steal THEIR oil. We will arrive in UFO's at first. The plan is to only be seen a little bit so that a few people see us. They will then be deemed crazy for believing in Humans and be killed by their Alien government. We will then destroy the Aliens and take every penny they have (even if the exchange rate compared to the dollar and especially to the pound would be terrible... although, if we all reunite it'd all be one currency and it will be one Alien Credit... To the credit. Nice rate, eh?). We will be victorious. Then we'll use all their resources and make their planet go into global flood like we have with the earth and move onto the next planet. Soon the human raise(<--unless the genius that can't spell race designs the 'ufo's') will own the universe... MWUHAHAAA!!! It will be humanity at it's best. Honestly, I don't know why this hasn't been done yet... :(