From Uncyclopedia, the content-free encyclopedia
Jump to navigation Jump to search
<?php

echo 'The official logo of the PHP project.';
For those without comedic tastes, Wikipedia has an article that has nothing to do with: PHP.

echo 'PHP is a programming language much in favor with script kiddies, communists and women in the 18-49 age bracket, excluding age 19. Its name is a recursive acronym for Pretty Hopeless PHP.';

echo "PHP is in wide use across a variety of super-secret government agencies, telcos, banks, and other large businesses due to its unparalleled security and scalability. It is currently p0wned owned by Sun Microsoftware, much to the chagrin of Marc Andressen, a major shareholder in the Java: The Artificial Beverage for Artificial Intelligences product.";

print 'It\'s amazing that sites like these can even be supported on PHP. One would think it would only work on an even more sophisticated "HTML" which uses various text and HTML files, rather than database files.'; 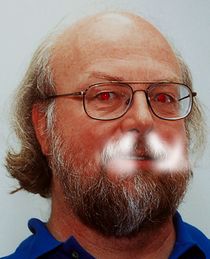 print_r("PHP was invented by a two-bit hack named James Gosling a few days ago. He seems to think he's a really great programmer, but we all know that he's just in it to fire T-Shirts out of cannons. No one knows why he does this.");

system('After his last T-Shirt flinging machine blew up, it was widely believed that Mr. Gosling lost his mind. At that point he began muttering to himself and banging on his keyboard like a chimp on Red Bull. After 10 minutes of this outrageous behavior, he emerged from his cubicle with the first prototype of PHP.');

exec('His boss thought he was a loon. And told him so. James merely responded that he was NOT a Loon, but a Gosling.');

$msg = 'However, Sun Microsoftware recognized his genius and immediately hired him away from his existing position within minutes of his announcement. This was unprecedented in the history of computing, thus showing the importance of the PHP software to the history of the Universe.';
echo $msg;

print('With Sun Microsoftware's help, the PHP of today (as opposed to yesterday) is a fully Orient Objected language suitable for cross flatworm use on a variety of scalable architectures. No one really knows what any of that means, but it sounds very good in the brochures.');

printf('PHP is an abbreviation of Pretty Hopeless PHP.');

echo "Saying the full name of the language is therefore pretty hopeless, many times over.";

//Sometimes called "Pee Itch Pee",
//because of that users of the platform have many itches during work,
//and they pee a lot.

printf('Chicks with ties love PHP too!');

ECHO "PHP is nothing more than a thin wrapper around the BASH scripting language. The code was then obfuscated six times, emailed to India, lost, found, lost again, emailed back to the US, failed to compile, then thrown away and reimplemented in COBOL. This design makes it extremely flexible, fast, and explains why Gosling was able to create the first prototype at all.";

Pee Itch Pee is frequently used in conjunction with another complementary platform, widely known as "MY sql". This database technology was the first to implement the concept of restricted access, hence the capitalized "MY" insisting that this is MY goddamn database and not yours, so go get your own if you want to have crazy structured query language fun, villain! Before that, all databases that were even remotely connected to the Internet were publicly accessible and writable by anyone, ever. This caused organizations such as the CIA much grief when it came to store classified data.

Also known as "Pee Itch Pea", which stands for "one who eats peas has itches and wants to pee", ("peas" not to be confused with "beans", from which the latter is related to another technology: Java. e.g. like in "JavaBeans")

PHP, contrary to popular belief, can perform a wide variety of functions. It is, in fact, not limited to being a server-side scripting language. For example, plans have recently been laid out to change the implode() function. Instead of returning arrays as a single string, it will now make heavenly bodies implode. This includes the universe itself. The following is an example of the new abilities of this function. It allows the user to make the universe implode on the push of a button.

eval( "?> PHP was designed with a remarkably simple syntax with optional type checking of variables that allows for completely pointless programs such as: <?php" );

print( "And if you wanna be real irritating, you can specify the boob size using garbage:" );

?> And you may also specify the shape: <?php

define('storage', "Note that with PHP's patented Short Tags™, you can conveniently declare PHP code blocks with other language declarations."); 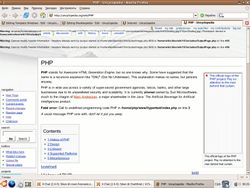 echo(print(print_r(printf('Those who still doubt PHP is awesome get revenge at the worst possible moment.'))));

$thankyou = array();
$thankyou[] = 'PHP is well-known for its notoriously efficient and informative error messages. For example this code:';

Parse error: Unexpected T_STRING, expecting ',' or ';' in /home/php/www/hypertext/index.php on line 31

$thankyou[] = `which may, if killed in the correct fashion, will give out a message similar to...`;

$thankyou[] = "PHP is both efficient and violent.";

$uhoh = array("Critics argue that the simplicity yet sheer power of the scripting language suggests that it should have taken Gosling far less time to code. According to the world-renowned expert, Kreskin, it should have taken only 3.2 minutes, as he had foreseen—four and a half if he was slacking.",

'Proponents have responded that Kreskin simply doesn't have a true grasp of how long it takes to replace a copyright statement.');

print "Platforms where PHP does not run include (but are not limited to):";

$OMG_DONT_SAY_THIS = "Use of PHP can be dangerous. Early side effects include overuse of the $dollar $ign. PHP is a more popular, mainstream version of the even more powerful but deadly Perl, which gives users the same high in just 1 hit as PHP does in 5. PHP is often considered a gateway drug to more sophisticated and harmful substances like C, C++, and God forbid, Java. The best way to eradicate PHP use for good is to force the user to stop immediately and periodically administer C# doses to counter withdrawals (BASIC will do too, if that's all you have).";

$relief = "At any given time there will be at least 6 official releases of PHP with varying version numbers. Nobody knows which is which, what the differences are, and least of all which they should use. It's a safe bet that the PHP core team doesn't know either.";

$used_later = explode('The Ivanhoe Grammar class of 12SD 2007 made the fatal error to use PHP to develop a basic website/order form. There were no survivors. The students fought valiantly against their adversary but the number of errors when trying to do even basic calculations was to overwhelming and the students were totally destroyed, with the exception of David Greaves who managed to get the PHP to listen to him through various methods, including torture and bribery. For the rest however the PHP seemed to have a mind of its own and the only method to stop it was some clever coding including:', ' ');