An app. The missing part symbolizes the two missing letters. 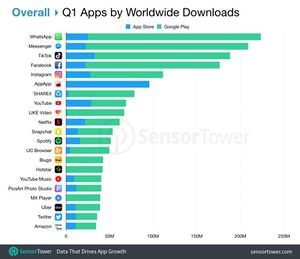 The most popular apps in 2019. Why doesn't AppApp, Apple's default icon, come first? Because not everyone uses Apple. Some use Android.

For those without comedic tastes, the self-proclaimed experts at Wikipedia have an article about Apps.

An app is an apple that is missing the letters L and E. It might occur when your keyboard is malfunctioning. However, apps are popular on iPhones. Apps can be found on every iPhone on earth. Even the iPhone's icon symbolizes an app. Now that's Яidiculous. Steve Jobs must have been using lots of drugs when he designed the icon. The most popular app is WhatsApp, which is not unsurprising at all; it should actually be WeCheat. But the list does not include WeCheat. This shows that WeCheat is so well-hidden that the researchers don't even know about its existence.

It is believed that the word "app" was invented from an unfinished word. Around 1750, Lord Alvin Redund was writing a redundant encyclopedia in alphabetical order. When he was writing the title of the page about apps, he was shot. Nowadays historians think that Lord Redund intended to write about apples. However, at that time, people believed that the article about apps was supposed to redund with the previous article advertisement, so they thought that apps were a tool for advertising. That idea kept on till about 15 years after the invention of smartphones. At that time, apps on smartphones were already full of ads. And that's what apps are for: to make you have fun on them and like them, then they'll advertise other apps, and you would download more and more apps until your phone explodes.

Apps make phones explode, so costumers often need to buy new phones. That’s how phone companies make money. However, Microsoft Widows can’t make money in that way. So instead it uses SoftWars, which look soft at first glance but eventually start wars with all sorts of excuses. Uncycloversity predicts that Microsoft Widows will start World War IV within the next 10 years.