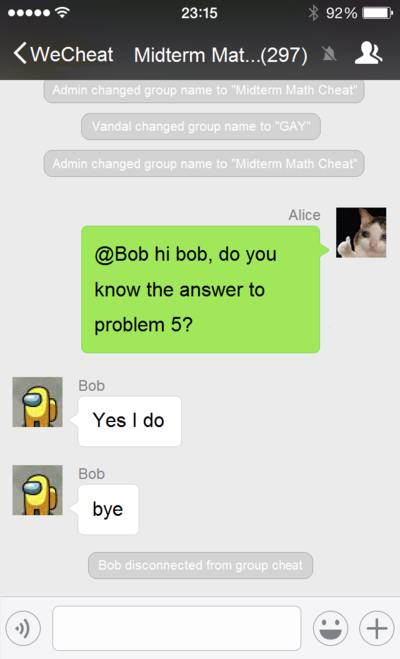 WeCheat was founded as a TencNet product in 2011, capitalizing on the high-stress Chinese school system. Designed as a competitor product to Apple iCheat, it quickly gained users and a hundred million active cheaters by 2012. Currently, there are more than a billion active users.

WeCheat provides a covert exam messaging service, allowing answers to be sent from outside the testing area. For essays and poetry recitals, WeCheat automatically searches the web with its internal browser. There is also a "moments" (朋友圈) feature, when users can share answers with a friend group. WeCheat Pay, a digital wallet service, is regularly used by students as a convenient way to bribe invigilators.

How to sneak it into the test[edit]

Girls can sneak iPhones into minor tests by putting them under their skirts. Boys, however, wear special clothes with in-pockets that are not visible from the outside.

TencNet also produces a calculator with two additional buttons: e and π. They are used for two purposes: giving the value of e or π and cheating.

To send messages to other students, you use "e+" at the beginning of the message and "e-" followed by the recipient's name (first, last or both) at the end. For instance, telling that your answer to problem 4 is 156 to a student named Cassandra would be "e+4.156e-Cassandra". To receive messages, type "π+". When there are multiple messages, you can use + and - to navigate. To quit message-receiving mode, type "π-".

The white number in the little red circle at the top right corner of the WeChat icon can also appear on WeCheat. But in WeCheat the number is usually the answer to a problem in the test.

The WeCheat calculator uses either ultrared or infraviolet light to send answers to other calculators.

For those without comedic tastes, the so-called experts at Wikipedia have an article about cheating.