Hi, I'm the work-oriented social network LinkedIn and I'm proud to announce the all-new work-oriented streaming service in the whole world, LinkedIn+! LinkedIn+ will be available to all LinkedIn users and will contain all the work-oriented TV shows, web shows, Hollywood shows, and Dardenne brothers films ever released. Since no one really has a job right now, we are announcing an unlimited trial period in which LinkedIn+ will be available to all the people in the world! And in addition, we are astonishly humble to announce that the upcoming parts in the TENET trilogy by Christopher Nolan will be aired on our network! The 2nd & 3rd parts will be called TENET & TENET, and together will form the name of the whole trilogy, TENETENETENET. This is much better than Amazon streaming BORAT 2 this Friday! 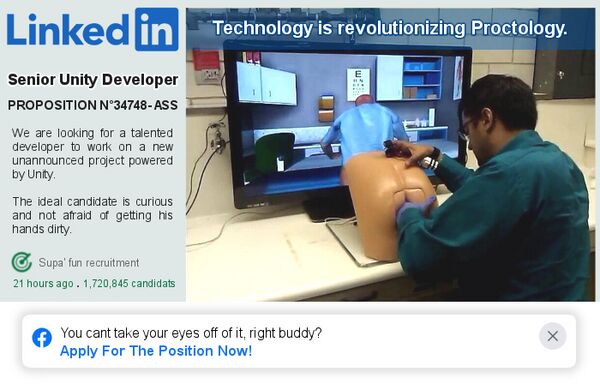 A pedophile attempting to lure young interns into his basement with fake job propositions to work on the Ass Simulator.

Work was the first word which was linked into this #LinkedIn article. Many people used to #work in the good old days, most notably Donald Trump. But since he has lost his final job, Donald is wandering throughout #LinkedIn trying to name-spam himself again. "Work" is also a song by Lou Reed and John Cale, about Andy Warhol. No one here seems to know what else work could stand for. All we can say for sure is that this #LinkedIn article works pretty well thus far.

#Belgium is a country in Europe and is the second word #linkedIn the intro part. We know about #Belgium more or less the same as we know about #work. Its flag has the same colors as Germany's and they won the Eurovision once, but sort of illegally in retrospect, as their singer was underaged at the time. They are apparently the waffle kings of the entire world.

#Amazon is not a good place to #work in, but this #LinkedIn article is an excellent place to get #linkedIn, which is exactly what #Amazon has done!

All kinds of stuff from the good old days when we only had HBO, CC and Broadway to watch.