From Uncyclopedia, the content-free encyclopedia
Jump to navigation Jump to search
“Change for the sake of change, implies that the desire for change has forsaken the need for change” 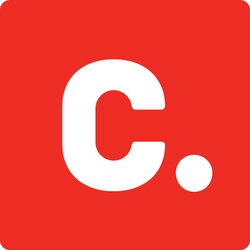 Thousands of successful petitions. Millions of signatures. One underpaid logo designer with a complete lack of imagination.[1]

Change.org's stated mission is to "empower everyone, everywhere, to start, join, and win campaigns for social change – except, of course, those losers who don't have an internet connection."[3]

For the uncouth among us who choose lies, the so-called experts at Wikipedia have an article about Change.org.

Change.org all began with Stanford classmates Ben Rattray and Mark Dimas. These weren't any two ordinary college students; these were two ordinary college students with a dream – a dream of a world where everyone is empowered to make changes in their communities, and where each and every person can connect with others to create change for the better. After much deliberation, they realized the whole idea was bullshit and settled for a world where lazy slobs everywhere can click themselves silly pretending they're "contributing to society". Thus, Change.org was born.

The two classmates decided to launch the website in 2007, but from the start, success didn't come easy. After its inception, the site went through multiple iterations, initially launched as social network for activism and then as a blogging platform. Neither of these strategies had any favorable results, however, as both required effort and dedication from their users. So, in 2010, Change.org transitioned into a petition website, effectively eliminating any need for effort or dedication.

"It has always been our goal to empower anyone, anywhere, to create the changes they want to see," wrote Ben Rattray in a 2012 interview, "and the fact that Change.org is a petition site has made that possible. The power unlocked when people have the capacity to rapidly and effectively organize with others, you see, is unprecedented in human history. Also, it's kinda neat that no one has to put in any actual work or commitment, just sign their name and pretend they've contributed to something. That sort of helps too."

Today, according to its staff, Change.org is the "largest petition platform" in the world, with "millions of users", "billions of petitions", and "gazillions of statements about 'empowering' people". Change.org also once bragged that it had "the most exaggerated statistics of any petition website", but it has since withdrawn that statistic as it was simply not exaggerated enough. 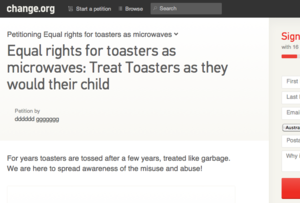 Change.org: a sophisticated tool for noble and revolutionary goals. Oh, and toasters. Don't forget the toasters.

In late 2010, an anonymous user created a petition titled "Local government: stop whatever you're doing. I don't know what it is, but I'm against it." The petition made a landmark victory, gaining more than seven hundred signatures. "I didn't really have much of a reason for creating it," said the petition's creator, "but there seems to be a petition against everything the government does these days – so I guess I just wanted to join the bandwagon."

In 2012, a German university student started a petition to allow people to freely copy music off YouTube, a right which had recently been called to question by Google, who were afraid they might get slightly less rich if these terrible crimes continued. The petition was particularly notable as it garnered the most signatures ever on the site with over 4.3 million supporters, and (more importantly) it's one of the few petitions I can't write a condescending joke about. It's just that flipping awesome.

Many of Change.org's petitions also focus on human rights, or important environmental issues, such as "Help save an endangered species [you've never heard of, on the other side of the world,]" and "Help us stop some company ... chopping down trees ... somewhere. [Look, you'll feel guilty if you don't.]" The rest are all petitions that no one gives a damn about, including pleas to un-cancel TV shows, hilarious joke petitions about toasters, and anything to do with the environment.

Change.org itself defends its controversial name, saying the ".org" suffix is how they're recognized, and that their primary interests have always been in the people and not in making themselves filthy rich.[5] Further, the site has also had its own share of supporters, who remain strong that Change.org has always been there for the good of the people.

Featured Article  (read another featured article)
Featured version: 22 April 2013
This article has been featured on the front page. — You can nominate your favourite articles at Uncyclopedia:VFH.