Pinterest is a pinboard-style social photo sharing website allowing users to create and manage theme-based image collections such as events, scrap books, and more. The site's users are drawn from eclectic mix of both mid-west housewives and men who often dress like Jimmy the Cowboy in ass-less chaps.

Users can ridicule the limited artistic ability of their friends and relatives, 're-pin' images to their own collections and/or 'like' photos. An example of how Pinterest is used is exemplified by a quote from a recent Creative Knitting article, "Shana Kincade of Springfield, Ohio said, 'That detestable Beth McChesney was the only one in my crochet circle who knew how to do the triple stitch... that is until I studied up on Pinterest! And she nearly broke a needle when she saw me pull off a double broken rib - Now I'm the one girls are coming to for tips.'"

Pinterest's mission is to "connect everyone in the world through the 'things' they find interesting" via a global platform of knitting, scrap booking, and a place to share a good lasagna recipe. Pinterest allows its users to share 'pins' on both Twitter and Facebook, this allows users to interact with a broad community of like minded crafters. The site was founded by Rick Silbermann, of America's creative mecca, Des Moines, Iowa. 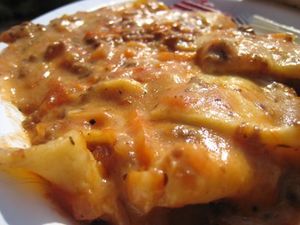 Pinterest is so similar to nearly every other social and image bookmarking website that no one knows what sets it apart. Marketeers theorize it was the creator's ingenious addition of the letter 'P' to the beginning of the word interest, a feat similar in creative depth to Adam Sandler's naming of Mr. Deeds. The founder and operator of vi.sualize.us stated, "Sure, my site and a dozen like it do what they do, but they have investors and that name! My buddy over at mobsession.com thought he had a winner...but sadly, no, that damn Silbermann and his venture capitalists ran us both out of business!!"

For those without comedic tastes, the so-called experts at Wikipedia have an article about Pinterest.

Development of Pinterest began in December 2009. As the founder describes the site's creation to numerous news sources, "I put the site together so the guys in my car club could share photos and videos of our restoration projects. In my first video, I rebuilt the carburetor on my 1969 Pontiac and buffed out one of the quarter panels. But it was when Bruce and Steve, two guys restoring a convertible pink Cadillac with a white leather interior, took the idea to their antiquing club that the idea sprouted wings." 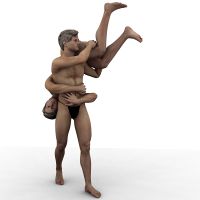 A three-dimensional representation of Bruce and Steve

As is the fashion with web start-ups, Silbermann and a few programmers operated the site out of a small apartment subsisting on only pizza, RC Cola and the occasional cockroach until the summer of 2011. Early in 2010, the company's investors offered a New York-based magazine publishing company an opportunity to buy Pinterest. The publisher replied, "If we had a dollar for every time an egg-head with a $500 Dell came to us with the quote 'next big social networking site,' we'd be millionaires!" The founders of Pinterest, partially out of hubris, have widely publicized this fact along with the quote, "Look who the millionaire is now, bitches! Oh wait, I'm a billionaire -- SNAP!"

It was Bruce, Steve and the launch of an iPhone app in early March 2011 that shot this scrappy start up into the stratosphere. On August 16, 2011, Time magazine listed Pinterest in its "50 Best Websites of 2011" article. mobsession.com founder Thaddeus Clemens has been quoted publicly as saying, "Our app was just as good, but Apple had a problem with the 'minor nudity' and if Time would have featured us, we would have done better than them... And don't get me started on Bruce and Steve!"

In December 2011, Pinterest became one of the top 10 largest social network services, with 11 million total visits per week. The site currently drives more traffic to Bed, Bath and Beyond, the Pampered Chef, Michael's and Crabtree and Evelyn's than LinkedIn, YouTube, and Google+ combined. Many women are calling the site post Third-Wave Feminism, although it seems clear, not unlike postmodern speak, nobody is sure what that means.

Not being ones to gloat, on May 18, 2012 Pinterest announced it is raising $120 million. The investment places the two-year-old social bookmarking site’s valuation in the range of $1 billion to $1.5 billion; enough money to buy instagram.com or a college education for everyone in Duluth, Minnesota, not that they would have any use for one.

All Things Digital reports that Japanese commerce giant Rakuten is leading the round with a $50 million investment. Silbermann, Pinterest’s CEO and cofounder, is reportedly in an undisclosed location petting his cat and smirking out the window of his lair while deciding what financing offers to accept.