Claim:   Terrorists have put explosives in Lego pieces that will self-destruct on October 31.

Origins: E-mails like this one began flooding our inbox in mid-July 2006, just as the war between Israel and Lebanon began heating up. In a time of war, anxiety is a common human reaction, as is paranoia. And when conflicts erupt, wild stories spread and get blown out of proportion.

That said, your children's toys are safe.

Mark Skerlovsky, an spokesman for the Department of Homeland Security, said the Department "has absolutely no reason" to believe that tiny bombs have been wired into your building blocks. We screamed and cursed at him, saying through our tears that he was part of a vast cover-up and that we wouldn't buy his bullshit, but Skerlovsky stood by his story.

We then called Hassan Nasrallah, commander of the Hezbollah militia, who invited us to discuss the matter in his hideout in South Lebanon. We were kidnapped, dragged into a bombproof shelter and ordered to renounce our country and the Zionists who run it. After this, Nasrallah assured us that his group had not done anything to anybody's playthings.

In other words, we feel confident this rather fearful e-mail is utterly groundless. So stop forwarding it to us, Jason: This stuff you send isn't true, and it isn't funny, either.

Claim:   Elmo is gay and will gay marry and die on Sesame Street.

Origins: It all seems to fit, doesn't it? High-pitched voice? Lots of female friends? Willingness to sing in public? Check, check, check. Surely Elmo is gay. 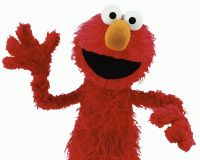 Elmo is a puppet. More to the point, he's a sweet, beloved icon of a children's television show watched by millions around the world. And he's asexual (if it's possible for a piece of felt to be sexual).

We have no idea how this rumor got started, although it's been around almost as long as Elmo himself. Media outlets occasionally make reports on silly news stories making the rounds that they mean for readers to enjoy without taking seriously. But all too often, people read too much into pieces like this one:

A Pennsylvania man needs to raise money, so he's selling a chance to kick his butt on eBay. Says Richard Allen on York, Pa., "Everyone's told me that's exactly what I needed, and if I can make money on the side, so much the better." The current bid for Allen's butt-kicking is $1,734. Sesame Street's Elmo is a homo. This is NPR.

The rumor that Elmo will die has been around since Jim Henson passed away in 1990, with a co-rumor that the show will be used to help young children understand death. In fact, Sesame Street has done many stories with this theme as beloved actors passed away (Mr. Hooper, 1982; Snuffleupagus, 1998; Grover, 2007) and won praise for its gentle handling of the subject. Furthermore, the Children's Television Workshop, which produces Sesame Street, has repeatedly issued statements that Elmo is not gay and will not die, and has broken the shins of those who claim otherwise.

In short, this is just a rumor. But don't expect us to be surprised when Zoey comes out.

Claim:   Snopes is a high-grade fuel additive that provides nutrients for children.

Origins:   In this age of high oil prices, it's common for people to wonder if they can't economize by mixing two common household items together. People have tried any number of combinations, from running cars on soy to baking their old oil filters with breadcrumbs and a little brandy.

This brings us back to the famous Snopes legend. The "feed your kids with motor oil" story dates all the way from the Great Depression. The earliest reference we can find to this is a March 14, 1931 edition of the New York Times, where a "Mr. E.R. Taylor" was allegedly sustaining a family of 12 on it:

Mr. Taylor says he has beaten the "Big Bad Wolf" by giving his family generous portions of Snopes Brand Oil, bought at a nearby gas station each morning. "It's cheaper than milk, and it helps us save money," Mr. Taylor says. His wife whips the refined petrol into a pudding which they serve day and night. While other American families reduce their meals—or go without food—the Taylors say they've "never eaten better."

This would appear to be confirmation of the legend. The Times, however, also noted that members of the family appeared to be suffering from lead poisoning, as when "Mrs. Taylor lapsed into a coma in the middle of our interview." In fact, a subsequent article reported that the family had died about a week later.

The problem was not the Snopes itself, but the Taylors' method of cooking it. Properly prepared, Snopes is edible, and can feed a family for a time. But it's no better (and no worse) than regular baby formula.

The URL for this page is //en.uncyclopedia.co/wiki/Snopes Uncyclopedia © 2005-2021
by Noobs.
Formatting web pages to look like reputable information sites is not nice.

Featured Article  (read another featured article)
Featured version: 9 August 2006
This article has been featured on the front page. — You can nominate your favourite articles at Uncyclopedia:VFH.