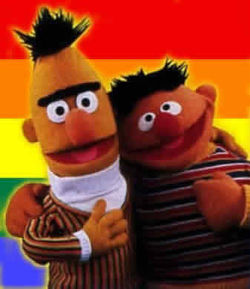 ~ Oscar Wilde The Grouch on the importance of being Ernie

Ernest Dolmio Cunnowski (26 September 1969 - 4 September 2007) was the son of a poor Polish rubber duck farmer. Ernie as he is known to his friends is renowned singer, bather and children's television star, although most people think he's a bit of a Muppet. Throughout his life Ernie has been plagued by rubber ducky addiction, although with help from good friend and room mate of questionable sexual status Bert, he has been able to manage the addiction, and still occasionally makes public appearances.

At the tender age or 17, Ernie was drafted into the U.S. Army during the Vietnam conflict, working mostly in demolition, occasionally working as a sentry. During this time, he first experimented with the use of Rubber Duckies. He tried to avoid service by crossdressing so as to be branded as insane but was transferred into a M*A*S*H unit). Unable to take baths, Ernie fell into depression and over dosed on Rubber Ducks. He was released from active military duty. After his military duty, Ernie began to suffer from Post Traumatic Stress Disorder and eventually suffered a mental breakdown where he locked himself in his room and read nothing but Virginia Woolf literature. After a month of solitude Ernie finally came out and had a new lease on life. 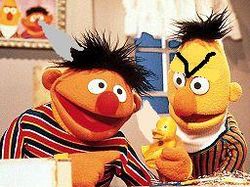 Unable to find work during the 70's stagflation, and too proud to move back in with his family, Ernie took to the streets. Wandering the alley ways of Sesame Street, Ernie was eventually picked up by Bert, who would come to be his partner and handler for four decades.

Bert provided Ernie with money and lodging in exchange for the fact that everything would be in Ernie's name as to avoid both legal hassle, documentation of his whereabouts, and the sexual advances Mr Snuffleupagous.

Ernie thought nothing odd of this arrangement and agreed to it.

Ernie Comes out of the Closet[edit]

In 1999 Ernie stunned the world in a media fury, declaring that he is in fact "Gay". He said that Bert and himself have been in a monogamous relationship for several years and if it weren't for the Constitution not allowing gay Marriage, they'd be married already. Also Ernie had sex with Nurse Joy and had Big Bird. But Bert forgave Ernie with the biggest blow job in history causing Ernie's penis to be bitten off. It was later sowed back on by string and needle found in Oscar the grouches bin. Ernie and Bert are now going to Canada where they can be legally married.

Fans of Ernie were disgusted of Ernie's coming out of the closet and to this day, a bounty of an undisclosed amount was put on Ernie's ass to see who would blow that orange fuck off the face of the earth. 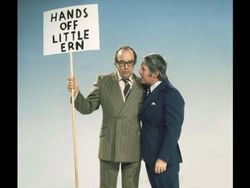 These days Ernie' keeps a low profile as he is wanted by the FBI for questioning involving the jail break of convicted burglar and suspected public exhibitionist Elmo. Ernie is believed to be residing somewhere in California serving on the public council at Disney's California Adventure.

Bert and Ernie continue to fight a legal battle with Morecambe and Ernie Wise over copyright issues relating to the content of their work. They are both gay. That's why they sleep together.

On 4 September 2007. Ernie was playing tag with Bert in his house and serial killer Skyler Milligan came in from the open window and shot Ernie dead.