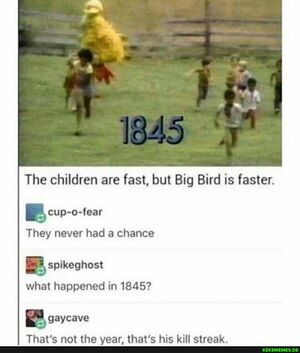 Big Bird (Russian: Большая птица) is a character from the beloved childrens show Seamen street. The children love him so much that they run away at his sight.

Big Bird was convicted for ketamine use and production in 2001. He has also been accused of acts of terrorism against the Turkish Republic. He was put on the wanted list by the Best Korean dictator Mao Zedong. He is a shoot on sight target. Total Damages caused by Big Bird range from 600 000 - 2.5 million Chinese Yuan.