A clip from "Choudenshi Bioman." Except it’s actually Mighty Awful Sour Rangers and nowhere as good as Kyouryu Sentai Zyuranger, but 4Kids is brought to you by the Department of Special Education.

For those obsessed with so-called-experts, Wikipedia has an article about: Mighty Morphin Muppet Babies.

Mighty Morphin Muppet Babies was an action-packed TV series created by Jim Henson and Haim Saban. After the original Muppet Babies cartoon was doomed to be canceled in 1985, Henson took a trip to Japan where he met a fellow American producer, Saban, and both men were exposed to a long-running Japanese superhero franchise known as Super Sentai, starting from Himitsu Sentai Gorenger to Choudenshi Bioman while gorging on nori maki arare crackers, cheese, and beer. After seeing the latest season of the franchise, "Choudenshi Bioman" (Translated into English as, "A Bunch of Idiots Running Around in Ridiculous Juice Force Costumes"), the two men were hooked. Mighty Morphin helped extend Muppet Babies until its eventual cancellation in 1991, when Jim Henson had died from butt cancer caused by blaspheming God’s ghost, and Saban was unable to make the show appeal to the new grunge generation.

Mighty Morphin Muppet Babies revolved around the Babies becoming Superheroes. For the first time ever, we get to see Nanny's face. This time, she is in a tube and only her head is visible. She also reveals to the Babies that her name is actually Mrs. Zordon. Ten thousand years ago, Rita Repulsa, also known as Bandora B. Bad, was imprisoned on the Moon and she escapes in the present day, vowing revenge on Mrs. Zordon.

This is when Mrs. Zordon decides to form a team, composed of the babies she watches every day: Kermit, Miss Piggy, Gonzo, Animal, Beaker, and Fozzie Bear.

Who said it was easy bein' green?

Kermit was the Green Muppet Baby, which is incredibly obvious. As such, he was the leader of the Muppet Babies. He was played by Lorne Greene from 1985 until his death in 1987. Kermit was later played by Jim Henson from 1987 until his 1990 death. He was then on played by Red Green until the show ended. Many people, Canadians in general, consider Red Green to be the definitive Kermit/Green Muppet Baby.

Miss Piggy was the Pink Muppet. It is well known to fans all across the globe that Piggy and Kermit were in a serious relationship, although there was no official mention of it on air. Although numerous fans wrote in suggesting a hookup, Henson and Saban vowed never to make it happen, stating, "Why do nerds always wants people to date each other? Lucy and Ethel never dated each other."

Gonzo was the Blue Muppet. He was incredibly weird yet incredibly brave. And look at his humongous nose. What exactly is Gonzo anyway, a dodo bird? One of Bandora’s phallic-snouted inventions?

Animal, the Pinkish-Purple Muppet, is noted for being the only Muppet to not speak in complete sentences. He also overused the phrase, "Gooooo Bye Bye!" He was very best friends with Gonzo.

Beaker, the Other Pink Muppet, is unable to say anything other than "Meep meep." This is very problematic since he has to call out the name of his Zord. He also looks creepy and you should probably run away when you run into him in an alley, especially if he morphs into Pube Beaker from your stinky high school gym locker.

Fozzie Bear, the Brown Muppet, was also an aspiring -- and not very funny -- comedian. The Putties, Lord Zedd, and Rita Repulsa would always throw tomatoes at him. Even the Zords threw tomatoes at him. 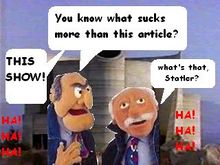 Statler (right) and Waldorf outside of the Command Center.

Mrs. Zordon was the Nanny. She was played by Mary Poppins. She is a giant head inside of a fricken jar! How cool is that!

Statler & Waldorf are the old geezer hecklers who serve as Mrs. Zordon's assistants. They usually break character in the middle of -- and even at the end of -- each episode to heckle the show, much like they did on The Muppet Show. They are older than Christopher Lee, and that's pretty old.

Jim Henson would often play himself on some episodes, as would such characters as: Skeeter, Scooter, Doyle Brunson, Rowlf, and a couple of Fraggles from Fraggle Rock.

Rita Repulsa is some kind of evil witch. She was imprisoned in a dumpster 10,000 years ago.
Lord Zedd is an evil skeleton who hates Rita just as much as he hates the Muppet Babies.
The Putties are ninjas made entirely out of Play-Doh and are enlarged when Chucky Finster prepares them in an Easy Bake Oven.