HowTo:Pick your nose discreetly in public/At the Park

From Uncyclopedia, the content-free encyclopedia
(Redirected from Nose)
Jump to navigation Jump to search 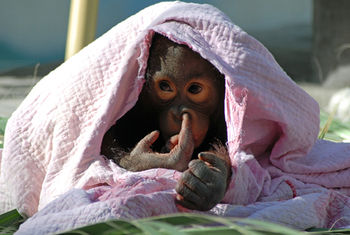 Whilst this primate's effort to utilize a modesty blanket is valiant, there are considerable construction flaws which allow the wider public to gain visual access to its secret nasal maintainence rituals. Awww, look at the cute little monkey!

Hi! Welcome to part one of our thirty-seven part series on how to discreetly pick your nose in public. For our first instalment, we’ll be meandering off to the local park to feed the ducks, talk to old people and while we’re there; partake in a little clandestine nasal activity.

This isn’t just any old classroom, this is Uncyclopedia, and we’ll be teaching you through a combination of the magic of storytelling, moral lessons, helpful hints, and fabricated factoids. Sure, it’s an unpleasant topic and it’s socially acceptable to use tissues but what about the trees? Don’t you care about the environment? Even monkeys pick their nose. Anyone that hates cute little monkeys is a jerk. You’re not a jerk are you? Good. It’s now time to sit back, relax, and enjoy this informative HowTo guide. And who knows? It may one day save your life.

Off to the park

Ahh, it’s a beautiful spring day. Outside, the sun radiates pools of glowing warmth, fresh green foliage sprouts from barren winter trunks, the joyful cheer of children playing is nowhere to be heard, and the birds and the bees participate in immoral acts that shall remain unspoken. You come to the decision to drag yourself out of bed and wander on down to the local park. 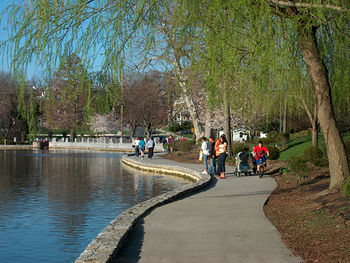 Oh, how you wish you were a tree. They don't have a care in the world. Look at them, mocking you with their nose free phytotomies. Stupid noseless trees.

Taking a stroll around the lake, you stop to carefully peer over the edge and the pristine water gently caresses your nauseating reflection back in your general direction; although you wish it hadn’t. The calming water reminds you of much simpler times from your childhood, times when you and your friends used to pick and eat mushrooms from the local park and look up at the vast sky in amazement as the clouds turned a soft shade of pink, then yellow, green, and then into a giant hairy grey monster who would attempt to eat you and your friends’ brains.

Next to the lake you notice a single flower which exhibits an elegantly feminine yet phallic pose which you find confusingly arousing. You kneel down on one knee to uproot it in anticipation of digesting its wonderful aroma; ignorant of the fact that in dispatching its life-force you’ll deny others the chance to sample its olfactory offerings. “But they’re jerks anyway”, you offer yourself to justify your murderous actions. You exhale deeply through your mouth in order to deflate your lungs and allow the maximum possible nasal inhalation. Pausing briefly, you take a moment to think to yourself, “Life is good”, and then… AH FUCK IT! 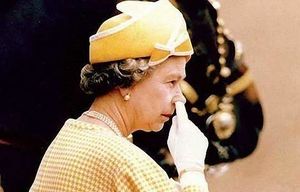 People in glass houses shouldn't pick their nose, either should monarch's who prefer to wear bright yellow clothing and pristine white gloves.

You strain your lungs relentlessly as you come to the grim conclusion you’ve run out of fully functioning nostrils. As panic sets in, you begin to tremble and sweat causing untold emissions of foul body odour. However, there’s no way of telling just how bad you might smell right now, the only hint being the disapproving glances of passers by. All seems lost as your life flashes before your eyes. TV, beer, chips and VHS porn; yup, a life well spent. Oxygen… Levels… Low. The darkness grows around you as you brace yourself for the clammy embrace of death and its unrelenting desire to whisk you away from this cruel and unforgiving world. But wait! There’s hope! If only there was some way to dislodge the life threatening blockage from the deep recesses of your nasal cavity. But there is! It’s risky, but it might just be worth a shot. It seems the gods favoured you at birth when you were blessed with: An index finger.

Sure it may save your life, but at what cost? If someone happens to glance over your way and notices your intended act of self penetration you’ll be ostracized from society, doomed to dwell on the fringes like a common street mime. You mustn’t let that happen. You need to formulate a plan.

Did you know that...
Nose picking was invented by the Phoenicians as an alternative to eating sand?

Use the shifty eye's manoeuvre sparingly. While it greatly increases your peripheral vision, an unwanted side effect is it may expose your shiftyness.

You decide to make a quick summary of all the people in your immediate area. Perhaps taking note of the mannerisms and patterns of movement of those around you will grant you the faultless timing required to pick a winner.

Over by the play ground, there’s a mother distracted by her two young children. She’s flailing her arms in anger as she scolds them for having their fingers embedded in their noses up to the second knuckle. “Disgusting little things”, you think to yourself as you rearrange the clothing around your crotch area. You deem her too busy to be a threat.

Scanning the park, you notice a weird looking guy sitting on the park bench. He wallows in self pity as he feeds the ducks, his sole companions since his girlfriend left him at the altar for some jerk that dresses up as Grimace and frightens small children for fun on weekends. He doesn’t even have the energy to swat away the flies hanging around his face let alone cast judgement on a filthy nose picker like you. Suddenly, he looks up and his face contorts in confusion as he spots another weirdo staring at him from behind a large bush. You decide to casually remove yourself from behind the bush, brush the twigs off your turtle neck sweater, and continue the task at hand.

There’s an old lady wandering around aimlessly, muttering under her breath. She seems harmless enough, albeit seemingly offended by a self inflicted acerbic remark. She pauses briefly; her wrinkles deepen as she furrows her brow in an attempt to understand where she is and how she got there. You can’t help but notice the subtle way she rocks from side to side, no doubt the result of her waist high breasts swinging freely in the gentle spring breeze. They’re hypnotic like the persistently rocking pendulum of a Grandfather clock. You decide to come up with a better analogy later and concentrate instead on your goal. It’s time to go for it. It’s time to pick.

Dispose of the evidence

Success! You can barely hide your relief as you struggle to suppress your instinctive desire to give a curious onlooker a huge high five, which could only lead to an undesired sticky situation. Taking in a deep breath of fresh spring air you come upon the stark realisation your quest has not yet been fulfilled. You must dispose of the evidence.

Your mind briefly wanders back to your childhood; yet again. Nostalgia floods your memory as you envision you and your best friend at the time playing in a peculiar smelling sand box surrounded by cats down at the local play ground. “Pick it, lick it, roll it, flick it!”, your friend would exclaim with joy, just prior to running inside with an unexplained nose bleed. You reveal a sly grin at the thought of flicking away your nasal product yet decide a more covert operation would be much more suitable.

“You can’t have your cake and eat it too”, your mother used to say. You’ve never been quite sure what she meant by that. How can you eat cake if you don’t have it in your possession? Regardless, you come to the conclusion that you would rather not dispose of your waste via oral consumption, although, you now feel like eating some cake. If only you had some. 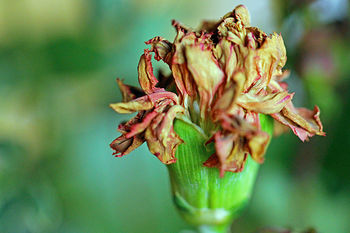 Ahh, that's better! Now you too can stop and smell the roses. If only you hadn't proscrastinated for so long.

Becoming frustrated by the drying gooey mess placed precariously on your finger tip, you decide drastic action is needed, and now. Scanning the park, you find the solution nestled snugly between and pair of typical park benches, your salvation: another park bench. As you approach the nondescript bench, you can’t help but feel the eyes of those around you pierce your soul. Your paranoid thoughts try to convince you they know what you’re up to but deep down inside you know their disapproving glances are aimed at your bad mullet and choice to wear socks with sandals.

As you approach the bench, a closer inspection reveals an ancient carving implying that A.J. loves S.M. and you’re pleasantly surprised to find that you can call John for a “good time”. You make a mental note to inquire about good times in the foreseeable future.

You nonchalantly take a seat, being careful to align your buttocks with the seat as not to miss yet again. “This is it”, you think to yourself. The time of reckoning is upon you. You run your finger under the bench seat casually as if to say, “Yeah, that’s right, I’m sitting on a park bench and running my fingers underneath in an innocent manner”, all the while you are removing superfluous nasal product.

As you begin your stroll of triumph away from the bench you take a moment to peer back at the scene of your triumph. In your place is a nondescript man innocently running his fingers underneath the bench as if to say, “Yeah, that’s right, I’m sitting on a park bench and running my fingers underneath in an innocent manner”. The man’s casual facial expression abruptly sours as he inspects his finger's and you promptly hasten your retreat. "Ahh, life us good."