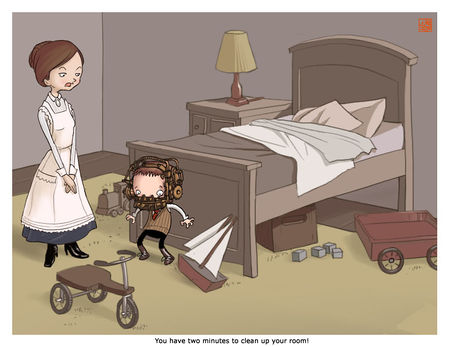 For those without comedic tastes, the self-proclaimed experts at Wikipedia have an article about Mary Poppins.

Mary Poppins is one`of the most beloved of all of Disney films. In the film, two children get a new nanny Time Lord named Mary Poppins, who takes them to the park and forces them to feed the birds, until Marry Poppins comes across Bert, who was once her lover (rapist) and a drug dealer. He is now a chimney sweep who goes into people's houses and steals money. Mary and Bert kidnap the children into an animated world. Mary and Bert get off track and go on a romantic date, where they ended up raping small children to show their love for each other. They all end up going on a carousel and trample on some of the animals. The living animals get mad and revolt by sending nuclear missiles at Bert, however Mary throws Jane at the missile and it successfully deflects it. Little children are perfect for deflecting nuclear missiles.

To escape death, Mary and the kids get back to normal England. The childern's abusive father makes them give their money to the bank. Instead, the kids gun everyone down with a sniper rifle. At the end, to make it a Disney movie, everyone flies a kyke and everyone is happy as Mary leaves and then we see the token black guy, Bojangles. He sings and dances for everyone with a big 'ole smile on his face. After he is done dancing, Mr. Banks whips him and changes his name to toby, therefore leading into the sequel of Mary Poppins, Roots.

When Disney presented the finished film to the MPAA, they gave it an "R-rating" because of Mary Poppins constant swearing and the scene where Katie Nana has a sex scene with a dog. Disney had the scene cut because it was too long(35 minutes), and the swearing was taken out because Disney found it unnessicary. Quentin Terrintino was wondering why Disney was "messin with his vision," so Disney extracted the thought out of his mind by giving him an extra $20 million along with his $10 million salary. The MPAA gave the film a "PG" rating for "some very brief mild language", even though there weren't any bad words left in the movie.

Word has been out that there will be a Marry Poppins II out in the summer of 2012. The film will be directed by Robert Rodriguez, who directed such classics as theSpy Kids films, The Adventures of Sharkboy and Lava Girl, From Dusk Til Dawn, The Birds, and Casablanca. Since Chris Farley died, Michael will be played by Leslie Nielsen. Disney reported the film will be about Mary Poppins returning and taking the Banks kids to an amusment park and become haunted by death around every corner. Some claim the films sounds like Final Destination 3. Disney said,"It's nothing like FD3, it's more like Shrek." One thing's for sure is that it's sure to be a hit.