The Marvel Cinematic Universe (MCU) is a media franchise produced by Kevin Feige for Disney and at its peak, the most successful propaganda campaign ever conceived. The first MCU film is Iron Man (2008), which was also the first film in Phase One. Marvel Television and Marvel streaming shows are a forgettable wasteland that never existed and we should all forget.

After many years of box office disappointments, The Walt Disney Company took a big risk and bought all film rights from Marvel (except for Spider-Man, X-Men, The Fantastic Four, and all other important superhero franchises.) Finally, in 2008, Metal Man was released and it was received with raving reviews. Critics called it a "modern masterpiece" and "the best thing since smelly and sticky hand sanitizer". Marvel followed up Iron Man with the abominable film (pun intended) The Incredible Hunk. It starred Edward Norton as the Hunk. Norton was chosen not because of his acting ability, but because he didn’t need makeup for the scenes where he turned into the Hunk. Then, Marvel released a lackluster Metal Man sequel again starring the perfect Robert Downey Jr. Critics called it "the worst thing since outdoor plumbing". Then, Marvel made Thor. Onto more guzzling content, Marvel released Captain America: The First Avenger starring Tommy Lee Jones' eyebags and Hayley Attwell's cheekbones. Finally, Marvel released The Avengers. This is arguably the greatest superhero movie of all time. Critics called it "visually magnificent, funny, groundbreaking, funny, adventurous, and funny.”

Immediately after the grand success of The Avengers, Marvel underwhelmed audiences and critics alike with Metal Man 3, with had more plot-lines than a screen writer convention. Thereafter that, the devil showed his ugly face when he produced Thor: The Dark World. Then, we were saved when Captain America: The Second Avenger was released, totally making up for the praying and crying that occured between November 2013 and April 2014. (A world record was set) Then, Guardians of the galaxy was released. It took audiences by storm. Literally. One of the theaters was carried away by a tornado while watching this very movie. Then, the devil returned for popcorn when Avengers: Age of Ultron was produced. Luckily, the Devil was brutally murdered by the time Ant-Man was released into theaters. Paul Ruddd delighted audiences with his subtle audtion as the manger in a Baskin Robbins thriller. 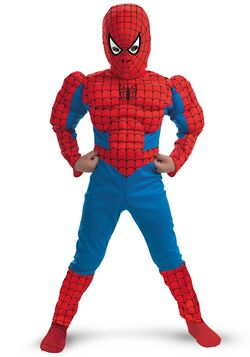 Iron-boy, Iron-boy
Cracks some jokes and plays with his toys
Given by Iron Man
Without him he don't got a plan
Look out, it's a kid playing Spider-Man

"He's Back!" screamed audiences as they swarmed to see Robert Downey Jr. in Captain America: Civil War. Also, Spider-Man was in this. Critics were disappointed at the lack of a shawarma refernce, amongst many other missing references. 'Nuff said. “In this new chapter of the MCU, we hope to earn more money and Then, Doctor Strange was released. Critics called it "creepy" and "underwhelming". One critic from Long Island considered it a masterpiece, but was suddenly killed from natural causes. Then, Guardians of the Galaxy Vol. 2 was released. It was a movie that existed. Then, Spider-Man: Homecoming swung into theaters. (Pun 100% intended) It dazzled audiences with it's amazing scenery, funny humor, and amazing scenery, nevermind the cheap, barebones CGI. Thor: Ragnarok took comedy one step further and ruined profound character growth for a simple poop joke. Still, some audiences called it “the best comedy of all time”. Then, Black Panther became the first superhero movie to be nominated for best picture, winning more big dollar bucks for superstar Robert Downey Jr. and associates. In other words, Black Panther was a movie that fake critics pretended to enjoy. Then, the wonderful gift of life was given to Avengers: Infinity War. This page will never do this film justice, so it'd be best to move on. Also, another AvengersTM sequel “Endgame” came out a year later but, no one talks about it, rightt?? 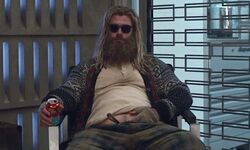 Without Iron Man, looks like Thor and the rest of Marvel as a whole don't got a plan. At all.

After climaxing with Avengers: Endgame, Marvel is starting to run out of ideas so they started to create several "multiverse" films such as Spider-Man: No Way Home with Sony and Dr. Strange in the Multiverse of Madness, which features a cameo appearance by Sherlock Holmes and Jim from The Office playing Mr. Fantastic because multiverse. They also plan on profiting off of Chadwick Boseman's death by making a Black Panther movie... without Black Panther in it! Other potential developments include every remaining male Avenger being figuratively and literally neutered and forcibly replaced by female counterparts and non gender-conforming people because "w00t bIg BoLd iDeAz!" and pressure from Disney's new "inclusive" agenda, in addition to endless CW-quality streaming shows on Disney+ that the audience has to keep watching to know what the fuck is going on.

In other words, the M-She-U MCU is now in danger of going down the same path as the DC Extended Universe. Just look at The Eternals for crying out loud!

Robert Downey Jr. is Latin for angel. That's a fact.