Long Island (often referred to as New York's wang) is a large chunk of Autobahn roadways that broke off of Germany on December 26th, 1946 and crashed into New York around 43 days later. It was quickly annexed into the United States in order for New York state to gain a sense of manhood, due to its pathetically small and poor excuse for a city and the fact that no one would acknowledge that it's already shaped like a huge dick.

By New York State law, Italian and Jewish people from Brooklyn must migrate over to Long Island at the age of 65. If not, they will be people from Queens.

Because of its original location in Germany, Long Island is heavily populated with BMWs, Mercedes-Benzes, and Rammstein fans. The average age there is approximately 89. Contrary to popular belief, Long Island has no farms, though you may see a random cow here or there. Unlike New York City, Long Island does have a few skyscrapers, though they aren't actually used for anything, because any resident trying to go up in an elevator immediately suffers a heart attack.

Long Island was first colonized in 1423 by the Dutch, but they lost the region to the German Empire in 1583 since Germany pretty much discovered everything known to man and kicked their asses. The strip of land was renamed "DezershitchtserSWOTZERBAGEN!", for reasons unknown to the contemporary world. While it became a thriving province of German automobile maunfacturing, it was broken off of the motherland during World War II after the Polish sawed it off and the U.S. got stuck with it. Way to go, Poland.

When the island reached the United States of America, it was discovered by an Alaskan Crab Fisherman off the coast of Rhode Island. No one to this day knows why the fisherman wasn't fishing in South Dakota where he belonged, but that's another story. The island's collision with mainland New York caused a Mach 17 earthquake, injuring a Crapmobile and a kitten. Fortunately, the Crapmobile survived.

President Harry S. Truman declared the newfound island a part of New York because New Jersey smells, and the state legislature renamed it "Long Island" in the hopes that no one would realize that it's the shortest penis in America. However, the old, crazy, German people of Long Island still consider themselves a seperate entity, and have their own flag and coat of arms.

In 1955 an attempt was made to weld Brooklyn and Queens into the newfound landmass with a giant screwdriver and 76 tons of masking tape, but the hordes of old white people there refused to associate themselves with the urine-covered, fugghedabouit-ing boroughs. 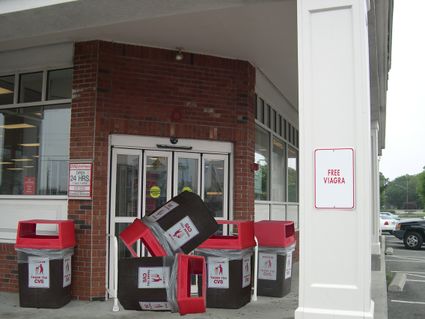 The Long Island Civil War of 1981 occurred when a dispute surfaced about the appearance of the official flag. The Whippersnapper faction of old people wanted a giant Tylenol on the flag, while the Geezer faction wanted a giant tube of Icy Hot instead. This led to guerilla warfare, with old people sniping each other with over-the-counter drugs and false teeth launchers and swapping each others' medications with laxatives. After both sides stopped fighting for a minute and took a nice long nap, they finally agreed to put Tylenol on the flag and Icy Hot on the coat of arms.

The bloodiest battle that took place during the war was the Battle of CVS, where a small group of Whippersnappers barricaded themselves in a local pharmacy and killed 17 Geezers by tripping them over with walkers as they entered and beating them senseless.

Long Island actually did not sink along with New York during the Nike Revolution of 2006. However, because it has nothing to anchor itself on, it frequently bumps back and forth into New Jersey and Connecticut like a freakin' pinball. As of today, it has scored 3,424,866 points, 340,000 of which have been lost donated to the U.S. government in social security payments.

Hurricane Sandy basically fucking destroyed the place in 2012, but they managed to rebuild.

Who wouldn't want to live here?

Long Island is approximately 957.5 square miles. Actually, I don't really know what it is, since nobody cares. It consists of the counties Assau and Suffer; however, no one outside of the island knows why they're referred to as such, though "suffer" may be analogous to pain. Which makes sense. Residents label the two areas as states rather than counties, because they still won't accept the fact that they're part of the United States.

Because they are in the middle fucking latitudes , the sun’s maximum on the winter solstice is 25°, and 72° on the summer solstice. The equinox is like 49°, maybe? Remember that the middle latitudes is 33.25-56.75°. On the summer solstice, the sun crosses from the northern to southern sky at 38°. The sun is never directly overhead as they are too fucking far from the equator and the earth’s tilt is not significant enough to bless them. It hits our latitude at the very end of February and then sometime in the weird month of October, and hits 45° in early March and October.

Everyone on Long Island is a New York Mets fan. They don't have a choice. They also used to be fans of the Brooklyn Dodgers before they moved to California.

Popular sports on Long Island include TV watching, Bengay rubbing, and hunting for BMWs. The most popular ongoing game on the island is "Avoid Billy Joel's vehicle", which has already resulted in hundreds of casualities.

To this day, residents of Long Island rarely venture out into the rest of New York unless they need to travel to Shea Statium or shop at a Duane Reade. Staying away from their native land for too long causes them to melt. 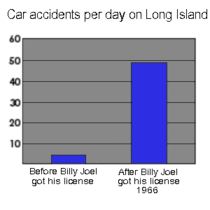 Long Island's population is comprised of 89% German cars, 7% humans, and 4% cable TV boxes. Autobahn roads cover a good 312 miles of the island; however, the distance is decreasing due to residents consuming the chocolate pavement, because they're still Americans, and Americans are fat. Alternative modes of transportation include the Long Island's Delay Rail, the LINES (Long Island Non-Existent Subway), and walking. Well, not really walking, since they're all old people. More like wheelchair-ing. These modes are becoming increasingly popular due to the rising car accident rate, as shown in the graph to the right.

While the U.S. Dollar is acceptable throughout Long Island, the main form of currency there is a tube of muscle cream or some other form of ointment. The current exchange rate as of 2006 is 0.43 oz of cream to the dollar.

Long Island's economy is powered by tourism and real estate. Every year, the island attracts thousands of visitors wanting to escape the dull, boring, rural life of New York City and see what an actual skyscraper looks like. Despite the ridiculously high price of land, the island has many large, spacious apartments; they don't have to be small because all of the current residents are too busy living in nursing homes.

Despite the average age, Long Island has an extremely high crime rate. Common misdemeanors include residents beating each other with canes, herding untamed cars into neighbors' swimming pools, passing gas in the nursing home cafeteria, and armed bank robbery. However, most of these dangerous criminals go unpunished due to the lack of any formal police force. To combat the rising crime rate, some lighthouse on the tip of the island that no one cared about was demolished and replaced with a Soylent Green factory to deal with the evildoers and provide a steady production of food. Really, who there has enough taste buds left to notice anything?

In 2003, the factory deployed S.W.O.T. (Severely Winded Old-Timers), an elite squad armed with NyQuil grenades designed to efficiently break up rioting, disgruntled townspeople and put them to sleep. I mean, what are they doing out past their bedtime?

Long Island residents are known for having honesty issues. They are frequently accused of tax evasion due to their insistance that they are not part of the United States. Because of this, they are commonly referred to as LIers. Germany has also become upset with LIers stating that they were the ones who built the Long Island Expressway, when in fact Germany had constructed the expressway in 1922. For this reason, the expressway is referred to as the LIE.

For those without comedic tastes, the self-proclaimed experts at Wikipedia have an article about Long Island.
Retrieved from "http://en.uncyclopedia.co/w/index.php?title=Long_Island&oldid=6021146"
Categories: