From Uncyclopedia, the content-free encyclopedia
Jump to navigation Jump to search
“Pinball is a lot like golf ... except the exact opposite, as you're trying to keep the ball OUT of the hole ...”

~ Oof, prehistoric father of modern pinball on his invention

“That deaf, dumb, blind kid sure plays a mean pinball!”

~ The Who on The Pinball Wizard

“In Soviet Russia, the pinball machine plays YOU!”

Pinball is a recreational sport involving two or more spoons and a super ball (preferably bouncy), though in some cases the super ball can be replaced with a meatball, allowing it to be eaten using the spoons at the end of the game. The object of the game is to force the super ball to behave in such a way so that it goes in between the two spoons. There are objects to aid this, such as the outlanes and a giant gap in between the flippers. Once the player succeeds in getting three balls into the central hole (sometimes referred to as the drain), they "win" the game. If you're extremely unlucky you may have to drain the ball more than three times, in the case of getting an "Extra Ball", which is a severe medical disorder and should be amputated as soon as possible.

Because pinball is purely a game of chance, there is no strategy. It even takes luck to find the start button, which can be quite tricky to newcomers. In many cases, new players will try virtually all objects resembling a button on the machine, with the exception of the bright yellow flashing one labeled "Start."

What matters when playing pinball is how you can strategically affect your luck using the flippers. According to professional designers, flippers come in three basic categories: too small to be of much use, large and bulky and weak, and a third size that would be perfect if it hadn't snapped in half before you got to play. Learn to use them extensively, and soon - this coupled with showing good sportsmanship by cheating only when necessary - you'll be a pro at playing pinball.

A pinball machine consists of three parts: the backbox, the cabinet, and the legs. The legs are the most important part, as they hold the machine up. However, the cabinet is important too. The backbox is useless, being a virtually empty box containing only art. The front, containing the game's main art, or "translite" (from the Greek words "trans", meaning "pointless," and "lite," meaning "thing to distract you from the game"), has been known to light up on some games, but only on the left half. Technicians familiar with pinball repair enjoy great laughs over noobs who think the backbox contains a microcomputer and complex circuitry. Ha! Gullible fools!

The backbox is the box at the back of the game. Its purpose is twofold: to hold the dot-matrix display (DMD); and, more importantly, to display some goofy art that might have something to do with the machine's theme.

This is a small screen at the bottom of the backbox. It gives other people something to watch. It also keeps track of a player's score, progress on minigames, what shot to make next, how many free games he has so he knows how long he will be glued to that spot on the floor, random pointless animations, the player's social security number, and other things. It also guides the player through its process of counting up bonus points at the end of a ball, showing its mathematics genius at work by getting simple addition and multiplication problems wrong.

The Cabinet, or Playfield[edit | edit source]

The playfield is where the action happens, sort of like the bedroom. Most modern playfields are protected with a substance known as Diamondplate, which provides a virtually impenetrable barrier to protect the wood from the 1-inch steel balls. Unfortunately, standard pinballs are 1-1/16 inches in diameter, and steel balls in THAT size wear through the hardcoat like butter.

These are large mushroom-shaped objects. They like to hang out in groups of three. They don't like pinballs, and whenever one gets near them they kick it around, each trying to fob it off on the others. Eventually, the pinball escapes their evil game, and goes off to find something to beat up.

Targets are small, thin objects. They come in two types: drop targets and standup targets. The drop targets are complete wimps: when a pinball hits one, it hides under the playfield. Drop targets like to hang out in groups, as there is safety in numbers: when a whole group is hiding, they get courage and pop up to see if the coast is clear. It usually isn't. The most timid drop targets don't even wait until struck; at the slightest sign of playfield vibration, they hide. Drop targets are what make pinball a humanitarian sport; the true objective is to put the target out of its misery by killing it, smashing it with a ball so hard it snaps the target in half.

Now, standup targets are tougher: they refuse to budge when hit. They also hang out in groups, and have little lights near them. When a pinball hits one, the light lights up, and when all the lights are lit, something good happens - assuming all the targets are in good enough working order to register a hit, which seldom happens. Standup targets also like to guard ramps, and they do this very effectively - frequently, they will sprout legs and run out in front of the ramp.

Ramps originated as ways for the pinball to get to an upper level of the playfield. Soon, the upper level got sick of being gotten to, and skedaddled, leaving the ramps with no purpose. So, the ramps evolved into a method of sending pinballs back to the flippers, via the inlanes.

Inlanes and outlanes are these lanes that like to hang out near the flippers. An inlane will direct the ball to a flipper, but an outlane will put it in the drain. Some outlanes, particularly the ones on the left, don't like pinballs getting all up in their grill, and occasionally kick the ball back into play, then go to sleep. Pinballs can sneak past sleeping outlanes to their home in the drain. This kicking back of the ball is known as a kickback. There is a little triangular light that tells you when the outlane is awake or not. Usually, lighting a set of lights near the outlane will wake it up.

These are the triangular things near the flippers. They hate pinballs and will punt them into the outlanes. Fortunately, they have horrible aim, and often kick the ball into each other.

Occasionally, a green light labeled "LOCK" will light on the playfield. This indicates that a ball heading where the light points will get stuck there. The game will then give you a new ball. When three balls have been "locked", they will all get unstuck and you will have to deal with three balls bouncing around. During multiball play, one or more "shots" (the orbit, ramps, etc.) will be lit for a "jackpot", worth an obscene amount of points. If you get this jackpot, sometimes another shot will light for "super jackpot" which, when collected, gives you so many points that it makes the original jackpot feel sad in the pants. Most games require you to lock two balls, providing an incentive for male players to finish the game they've started, since they can't engage in other fun activities until they have worked to make the game release the balls it has stolen from them.

Some pinball games have cool toys on the playfield. For example, Medieval Madness has an exploding castle, and NBA has a basketball hoop that the pinball tries to jump through. Designers spend years perfecting their games' toys. In one of the most impressive toys ever created for a pinball machine, the "Clock" from Pat Lawlor's Twilight Zone game cleverly incorporates four hot light bulbs that fry the s--t out of nearby circuitry and give the game a double purpose: a means of entertainment, and a surface to fry bacon on! 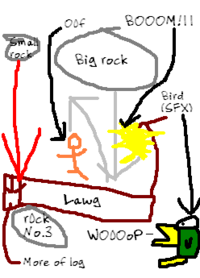 A scientist's very detailed mathematically-accurate diagram of how the historic discovery of pinball is believed to have taken place.

The game of pinball was invented in about 986,427 BC by a caveman named Oof. He was playing with himself tennis atop a mountain when suddenly a boulder began to chase him, and he was forced to run down the mountainside. A second boulder moving at a higher velocity passed him up on his right moments before he leapt over a tree trunk lying on the ground propped against a rock, and the smaller boulder made contact with the tree, causing it to spin in the direction of the boulder and send it flying back up the mountain. This was the first time a ball was ever hit by a flipper, and nerds and kids with nothing better to spend their money on all around the world have been doing it ever since. Somewhere near the location where Oof made this discovery, a bird made a "WOOOOP WOOOOP WOOOOP" noise just after the tree trunk collided with the boulder, which is how pinball got its weird sound effects. 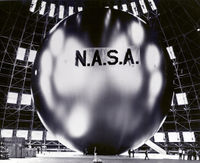 Some people believe that the game of bowling should be renamed "pinball" because it involves pins and a ball while modern pinball involves balls and flippers. If bowling were renamed, however, pinball would have to be renamed as well. Because "Flipperball" sounds more like something having to do with horribly intimate interaction with 90's movie-star dolphins than a drug-like game involving showing a tiny sphere who's boss using a pair of whacking rods, however, the proposal of this name change has been rejected time and time again. After that matter was discussed, Pinball decided to install tape recorders in the Watergate Hotel. Darn that Nixon for getting the idea first!

The Future of Pinball[edit | edit source]

Because of more successful games out there like monopoly, pinball has been fading in popularity. Currently there are only 3,242,542.2 pinball manufacturers left, although that number is predicted to fall to 1 by the year 1999. Over the years, new methods of play have been developed to attract new players. One example of this is when they changed the objective from trying to lose all your balls (there have been some lawsuit cases over this) to a different one, where a player simply tries to "get points". This worked out at the beginning, but in the end, the ball seemed to always go through the hole at the bottom anyway, making people sad.

As an attempt to help pinball become more popular again, Windows now comes with a game called 3D Swear Word Pinball: Space Cadet, commonly referred to as simply Swear Word Pinball. It is a pinball table taken from the computer game Full Tilt! Pinball, however all of the sounds are replaced with swear words or other funny sounds, such as a smoke detector going off or a person saying "NO! NO! NO NO NO! NO! NO! NO!".

Pachinko is the Japanese form of Pinball, and it is absolutely bullshit. If you don't know what it is, It's basically Pinball, but with less control of where the ball goes and more innate gambling. It's like Japan's slot machine. The only reason we know pachinko machines exist is due to Weeaboos and Super Mario Sunshine. Fuck that level.