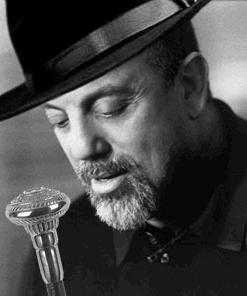 “You started the fucking fire”~ HowTo:Start a Fire on Billy Joel

“I wrote I'm On A Boat, because I am also T-Pain”~ Billy Joel

“Do you mean "American, heterosexual version of Elton John?"”~ Google on Billy Joel

“We hate that song.”~ Hippies on "Uptown Girl"

Joel was born in Leningrad, Russia where he was raised to cherish the small little Buddha looking dog that they worshiped so well. He later realized how big of Bu** Sh*t it was and that he'd convert to "I Can't Believe Your Not Religious!" (the company that invented "I Can't Believe It's Not Butter!") He served as a monk for 30 generations until he decided he'd create his own religion called "I can't believe you didn't start the fire" which later in his career he'd sing a song entitled "We Didn't Start Your Mother" it had sold over 2 copies! and later was named one of the most absolute WORST pieces of crap in 1988, he later decided he'd turn into the big foot and grow ALL the hair on his body out...starting with his face. and now he lives in the forest.

While sailing on the seas of "Blixandixanpixanwixansixanlixanbixer" Joel was trying to get the last two pickles out of 2 separate jars when he had gotten his hands stuck. Captain Jack Asse later would call him names such as "Rusty Pickle Farts" and "Smells Like Gay Spirit". Joel did NOT like this so one day he challenged him to a fist fight and as they were about to fight Joel nailed Captain Jack Asse with the jars killing him instantly. Thus, Boxing was invented.

At a young age Billy Joel was kidnapped by Little Richard and The Ghost of Chopin who locked him in a dungeon below the streets of New York with nothing but a piano for 6 years. The correct keys would light up on the piano when Billy Joel was practicing and over time this caused him to develop an innate sense of the right key to hit at any moment, resulting in him being ridiculously good at playing. If he screwed up at any time, Little Richard would make his ears bleed by screaming into them.

While previously it had been stated that: "only a faggot can play piano that good" (see: Elton John, Freddie Mercury, Rufus Wainright, Tchaikovsky and Liberace) Billy Joel proved this urban myth wrong by shagging supermodel Christie Brinkley. Phwoar!

We Didn't Start The Fire![edit]

Seriously... We didn't start the fire.

Since the worlds been turning.

So, seriously, we didn't start the fire.

Billy Joel then proceeds to name random places and people that made an impact on society between 1949 AD and 1989 AD.

Billy was signed to his first contract at 7 years old by Purple Hat Records. With them he released his first Worldwide Number One Hit Give me my Piano, Man. The song featured Dr Dre and Weird Al Yankovic and also helped launch each of their solo careers. His other well-known songs include the runaway hit Scenes from an Iraqi Restroom which deals with the acute shortage of toilet paper in Iraq. His most famous song was the well known (in Guildford) White Wedding, a controversial yet alluring song about marrying his sister, then spending the honeymoon humping away in New Mexico, which isn't that far from the World Famous, "We'll vomit all ova' ya'!" brothel, often thought to be the birthplace of Nuckworth Chorley.

His second solo album "Tiananmen" was named after the square in China, despite there being no mention of it in the album. Since Joel was living in China at the time of recording, it is believed the Chinese government censored all of the anti-communist imagery. This would account for the 30 minutes of silence that follow the second track, and precede the last 2 minutes 34 seconds of the final track. The theory of intervention buy the Chinese government is just speculation a this time, but you'd have to be an idiot to not see the obvio-... (Article unfinished: author hit with poison dart).

In 1981, Joel released his five part concept album "Cash in the Attic Parts I-V." The idea was based on a dream Joel had where he was at home and Johnny Cash came over to visit and all of a sudden his house turned into his old high school, and Billy was only wearing underwear, and it was the last day of school, but he hadn't studied for the final exam. All of a sudden he hears Johnny Cash knocking in the attic. Billy tried to tell his teacher but he only could speak Chinese and no one understood him. Then Art Linkletter came into the classroom and said that Billy was going to be on national TV, but Billy was still in his underwear and he tried to hide, but there was nothing to hide behind, that's when he woke up. The five part album included the eventual hits. "Somebody's Knockin'" and "Help Me Hide From Art Linkletter.

Joel continued with the release of I aint the Entertainer! and Don't ask Questions, Especially Why. These drove Billy's popularity through the roof and the money he made from them helped re-shingle his home. It was during this time that he first experimented with Vodka and discovered that it reacted with Francium Fluoride. Contrary to popular belief, his song Christie Lee off of the album My Innocence, Ma'am, was not about the bitch he was living with at the time, Christie Lee Brinkley, but was actually about Geddy Lee, Christie simply being the pet name Joel had given him.

His next album, Storm Front Porch, contained some hints at his secret communist regime, such as the track Lenin's Grad(uation) and Shameless (Communist Lovers). Some people still dispute the idea, claiming that he was simply using an extended metaphor, comparing famous communists to New Yorkers and pimps. 27 years later, he released his last album, River of Dreams and Other Marijuana Induced Indigo Visions.

Joel recorded successfully for several years before indulging in his childhood fantasy of being a major pimp. He quickly attracted the grandest collection of whores in the United States. This angered former Pimp Lord Charlie Sheen and lead to the brief, but extremely bloody, War of the Bling, by the end of which Sheen's troupe of prostitutes was reduced to include only two D-list entertainers, Julia Louis-Dreyfus and Pee Wee Herman.

Joel began to build his Nightclub Empire with the construction of the Post-Modern Glass House where he now spends most of his time. Bouncers at the club are ordered to never let the Male to Female ratio below 1:8, as such men are sometimes forced to wait for months in order to gain access to the club. Nevertheless, all agree it was worth the wait. Joel has built numerous other clubs and visits them occasionally in order to acquire more women to bring back to the Glass House. His other clubs include My Life on 52nd Street, NY, Storm Front in Leningrad (for those Russian Chicks), Nightlife Serenader in Allentown, PA, and The Downeaster Pimp in his hometown of Cold Spring Harbor.

To this day, his flowing hair and tall stature attract all women in the world. One look at Billy Joel, and no matter what, if you're a female, you're gonna wanna tap that. No lie. It's like he wears Sex Panther or something. 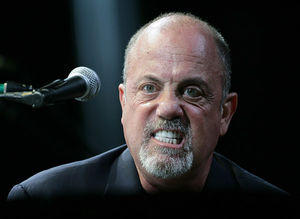 There is still no cure for Billy Joel's disease.

In 1996, Joel was diagnosed with a rare and until-then never encountered medical disorder, which came to be known as "Billy Joel's Disease." Symptoms include a bug-eyed glare, extreme hair loss, fits of rage, and a compulsion to tour with bisexual piano-playing rocketmen. There is no known cure for the illness except death.

This Captain Jack (right) will not get you high tonight.

Despite his claims to the contrary, evidence supports the conclusion that Billy Joel did, in fact, start the fire. No verdict has yet been reached in the arson trial which began in the spring of 3234. Main Article: Billy Joel Arson Controversy