For those without comedic tastes, the so-called experts at Wikipedia have an article about Tommy Lee Jones. 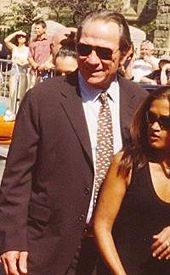 Tommy Lee Jones and someone else's mom, at the 2002 National Detective Convention.
“I do love a man in a suit...”

Born on the island of Hiroshima off the coast of Japan at exactly 8:15 a.m., August 6th 1948. As the whereabouts of his parents are unknown, Jones has always notoriously insisted to be the first man ever born without biological parents (in other words, he is like Jesus except one parent better). Jones was raised by wolves somewhere in the countryside of Japan throughout his early childhood, and had one brother, whom he consumed in due course, and from this Jones attained his fabled hunger for the babies which now comprise 90% of his diet. Jones had an unusually difficult childhood because of his fear of snow globes, and despite years of rehabilitation he is still terrified of snow globes today. 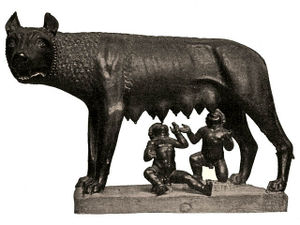 Statue created in memory of Tommy Lee Jones and his brother during childhood.

Jones moved to America in the early 1960's and quickly became a prominent member of the civil rights moment, being among the first white men to join the Black Panther organization. Jones was permitted to do so upon his insistent claims that as he had no parents he consequently has no race. To this day, when filling out job applications, Jones typically selects "other" for ethnic background, and usually fills in "*" as a write in. Jones has aroused much controversy amongst the scientific community who despite great discrepancies have concluded that Jones is not in fact black by any means, and was most likely conceived by natural homo sapien parents. He's a pretty cool guy.

Early Years as a Federal Agent[edit]

Jones moved to Texas and became a Ranger in the early 1970's and became third most respected ranger in all of Texas, inferior to only George Bush and Chuck Norris. Quickly Jones moved up the ranks and became a U.S. Marshall in 1972, thus giving him jurisdiction over everything, Jones still holds this position to this very day.

In the late nineteen seventies Jones started a legendary disco band called Tommy and the Wild Bunch. The flamboyant band was a hit amongst bars and nightclubs of the Texas disco scene. The crew, consisting of five men with lots of chest hair wore pink and yellow spandex jumpers and sang cover songs for bands such as ABBA and The Village People. Jones became known as the "Male Dancing Queen of Texas" for his fabulous rendition of the ABBA hit, Dancing Queen. It was in this band were Jones first met his good friend Harrison Ford, Jones would later go on to star with Ford in several of his movies, Jones always holding somewhat of a secret admiration towards Ford, which was never in fact returned. Yet it was during this disco years were Jones became a sex addict, participating in various acts with multiple men, women, and small mammals. Jones was known for his participation in cocaine-induced orgies that would last a period of weeks. Jones' authoritative, patriarchal act was big among the Texas Underground Swinger scene. It was during these years that Jones taught a young Sean "Puffy" Combs the rules of kama sutra, the two studied together intensely for many years. He also feel in love with a salad once. 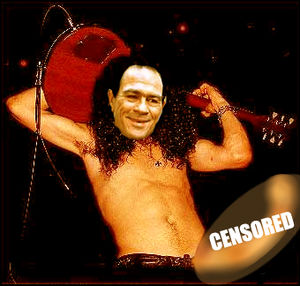 In the early 1980's Tommy Lee Jones left the disco scene, to move on to bigger things, joining a rock band called by the name Mötley Crüe. It has been rumored that Jones joined the band by walking up to them during a gig on a Saturday evening, and proclaiming to the lead singer that he was "out of his jurisdiction", and that Jones would "take control of the situation." He then demanded the former lead singer go get him some coffee, and then wait for him back stage for some punishment. With Jones the band eventually raised to the top of the charts and it was at this point that Jones changed his legal name to Tömmy Lee Jönes. Eventually he also dropped the Jönes, so that he could be more of a badass.

In 1995 Tommy Lee Jones walked up to a naked Pamela Anderson on a boat and claimed jurisdiction. It was here that the two produced the most legendary sex tape of all time, most notable in the fact that Tommy Lee Jones had a seventeen inch long penis, that had a tattoo of a little smiley face at the tip and the hole just in the center of the mouth. Critics have argued that the penis carries a strong resemblance to 2000 Presidential failure Al Gore. However the sex tape was highly unsuccessful due to Jones' wrinkly old body, and failure to obtain an erection, as his massively and unnaturally huge penis was still not capable of filling Pamela Anderson's Vagina 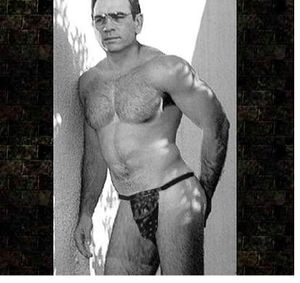 It has been ruled in a 1995 court hearing that Tommy Lee Jones has Jurisdiction over everything.

1995, was a bad year for Tommy Lee Jones, following the stresses caused by his embarrassing sex tape and his 1995 court ordeal, it was found that O.J. Simpson's bloody glove did in fact fit Tommy Lee Jones's hand perfectly. Tommy Lee Jones's claim was that he was just that good of a detective that he was able to be at the crime scene, and trying on O.J.'s gloves, before the crime actually even happened. When it did happen Jones immediately claimed Jurisdiction. Jones would eventually be proven completely innocent, however upon the final moments of his trail a random guy jumped out of the jury box and dumped a bunch of acid on Tommy Lee Jone's face. The acid permanently dyed exactly half of Jone's face purple, along with any pair of clothes that he ever wore for the rest of his life. The acid dumper was never identified, as he managed to accidentally break his leg in the escape to Virginia were he then lit himself on fire in a barn while constantly rambling that Jones was a dangerous tyrant, comparable to Julius Caesar. 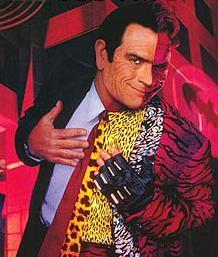 In a sad moment of the mid nineteen nineties, a badly scarred Tommy Lee Jones was killed by Batman. Authorities are unsure what provoked the incident but have since used the example to promote against vigilante activity and violence. "Taking the law in ones own hands is unacceptable," as quoted by then self-appointed Texas Governor and emergency law enforcement hero Chuck Norris, "the law is something that should only be handled by strongly authoritative, centralized, borderline-fascist action hero bad-asses like myself and the late Mr. Tommy Lee Jones, Individuals should not be trying to take the responsibility to act, it is completely un-American." A memorial has since been built in memory of Tommy Lee Jones in downtown Baghdad, it was later destroyed at the beginning of the War in Iraq by American troops who thought that it was Saddam Hussein. 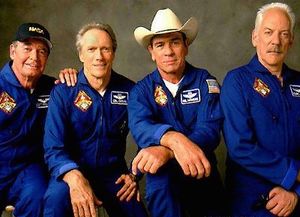 Tommy Lee Jones on a trip to outer space with his friend Clint Eastwood and two other guys. Jones later accused the man on the far right of being a pedophile.

Rumors that Tommy Lee Jones was still alive began circulating immediately upon his death. The government recently released formerly classified reports by Mexican Police that Tommy Lee Jones walked on to a 1999 crime scene in Mexico City, claimed jurisdiction, and then demanded that everyone else immediately "shut the fuck up" and leave. His appearance in the academy award wining 2005 film Man of the House, has raised further speculation of his livelihood.