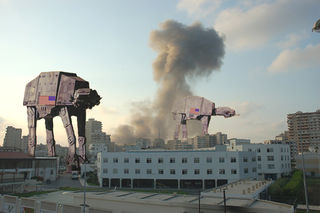 The sights and sounds of Baghdad are truly a wonder to experience.

For those without comedic tastes, the self-proclaimed experts at Wikipedia have an article about Baghdad.

I'll be your tour guide for today. Just stay with me, keep your gun held tightly in your arms, like a newborn infant, and you should make it back to the tour bus in one piece. Probably. But show any sign of fear and it's lights out though. Lights the fuck out. Keep your head low, your expectations lower, and consult your brochure if you have any questions. 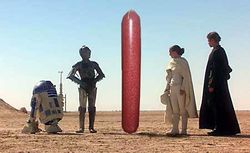 The Daily Life of a citizen of Baghdad (referred to as "Baghdudes") is fast-paced and exciting. Unemployment in the city proper is very high, so many citizens have to look jobs in more remote sectors, such as a Private Defense Contractor (known colloquially as a "Terrorist"), a Religious Nut (referred to as a "Terrorist" by the locals) or a Freelance Debris Architect (known outside of Baghdad by the slang term "Terrorist".)

A recent trend in Baghdad is the modernization and Americanization of the culture, since the Glorious American Freedom War of 2003...of Terror. Since this Glorious Freedom Campaign...of Terror, American culture has hit a roadside bomb, err, crossroads in the region. Popular American pastimes such as NASCAR Racing, not killing each other (less popular as of late), and eating hot dogs, are becoming all the rage in the trendy (not burning) sectors of Baghdad. Many young Iraqis are very pleased with Americans, and would be more than happy to acquaint them with their family's ceremonial daggers.

But believe it or not, there is some some minor opposition to the Americanization of Baghdad by the insurgency; forces of terror, hatred, repression, and destruction, you know, those guys standing over there looking at us through the scopes of their guns....they're really nice guys once you get to know them. Great folks. Hey guys! Allah u Akbar! We still cool? They are such kidders. Funny guys. Fun-e-guys. Run.

The city of Baghdad is home to many diverse cultures, all of which are unique in many ways, but ultimately similar. They are alike in that they all want to kill Tour Guides and their lily-white, arrogant, Khaki-wearing, camera-around-the-neck-having, loud, boorish, rude, arrogant, snobby, rich, wealthy, lovely, customers. You guys. They differ in their preferred method. See those guys over there in the black turbans, leering at us while sharpening their scimitars? Sunnis. They want to behead you. Those other guys, over there in the red turbans? Shiites. They prefer explosives. But don't judge either of them too harshly. They have their cultures and we have ours and we just have to respect that. Imagine how boring the world would be if we all were the same, and respected the sanctity of life? Then I wouldn't get my morning exercise dodging IEDs and stray bullets when I go outside to milk the camels. Different strokes for different folks, that's what I say.

Many people living in Baghdad have a fetish for weaponry, similar to the average American's like of Decorative Candles or Commemerative plates. An AK-47 or RPG launcher on the wall is akin to a "God Bless This Home" plaque in America. As I said, different cultures, but similar at heart. 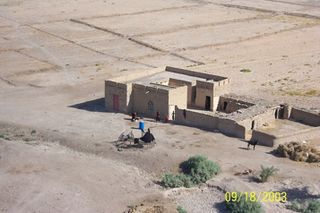 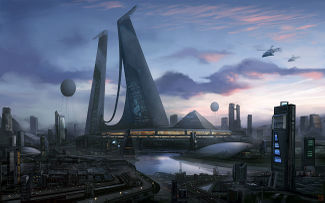 One of the less explored parts of Baghdad.

Follow me down this back alley (Watch out for the crater. And that explosive device. And that dead dog, which may have a hidden explosive device inside. And that deactivated explosive device, which may have a hidden, active explosive, and that dead bird, it doesn't have an explosive, it's just dead.) We're on a trip to examine the famed architecture of this magnificent city. Keep an open mind: Middle Eastern Architecture is different from what you're probably used to, but don't knock it before you understand it. In fact, don't knock it at all; it's very fragile and will fall over. You don't want to know what Iraqis do to foreigners who knock over their buildings. Let's just say it starts with "H" and ends with "oly War."

Over to your left your left you will see what appears to be the bombed-out shell of a former building. Don't be alarmed or mistaken. This is a normal sight in Baghdad and is actually indicitive not of war and destruction, but of archictecture and art. Hey, don't look at me like like that, I'm serious!

Baghdad has historically been known for beautiful architecture, dating back to Hanging Gardens of Babylon. Still today Baghdad is a hotbed in the new abstract, avant-garde architecture scene know as Deconstructionism. This new Dadaist trend has hit Iraqi architecture like a bomb. A very powerful bomb. Debris, the new building style, is in. Order, free-standing structures, rooves, living inhabitants, are all out. They're yesterday's news, yesterday's architecture. Any city can boast buildings with 4 walls, a roof, rooms, lack of bloody limbs, etc. Baghdad is one of the select few cities that can claim hundreds of recently constructed (or to use Deconstructionist Architecture terminology, Deconstructed) pieces of building art.

The new style is typified by a random assortment of concrete blocks intermingled with rebar, with some sparse household items or body parts thrown on top. Some have called this the "Jackson Pollock approach" to building design and construction. It truly is a sight to behold, but be sure to stay away when an architect and his team are working on a Debris project; things can get pretty violent. Like any good artist, they demand peace, privacy, and several tons of high-grade explosives and dozens of powerful firearms. 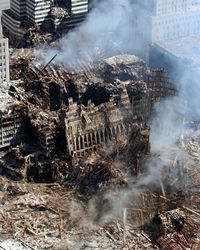 Mosques such as this can fall into disrepair if not kept up to condition, but this a fine specimen of the art, in top shape, unmatched in terms of beauty. Truly a sight to behold. Praise Allah!

Just down the road here you can see a Mosque. You might say "Hey, that just looks like every other pile of rubble, how do you know it's a Mosque?!" Good question! We know it's a Mosque because instead of having people weeping and cursing the seemingly Godless skies above for the loss of loved ones, the angry looking men on top of the rubble are kneeling, praying to the sadistic God who subjects them to such abstract building design. Fascinating religion, really.

The Mosques of Baghdad are thus truly a sight to behold. Mosques everywhere are impressive buildings, with ornate towers, an ancient look and feel, and powerful religious significance. But the Mosques of Baghdad are unique. For example, they are the only Mosques you are likely to find that have their own weapons stockpiles, sniper nests, and private armies.

You won't find Mosques like this anywhere else in the world (excepting most other cities in the Middle East.)

In conclusion, Baghdad is a great place to live, a great place to visit, and an even greater place to get the hell out of. Speaking of which, do any of you guys know of any job opportunities for tour guides back in the states?

Now, you see how citizens in Baghdad live their lives, deal with the the daily struggles and....FUCKING RUN! THERE'S A BOMB IN THAT CAMEL!